As the Right Steps Up Attacks on Robert Mueller, Democrats Launch Effort to Protect Him 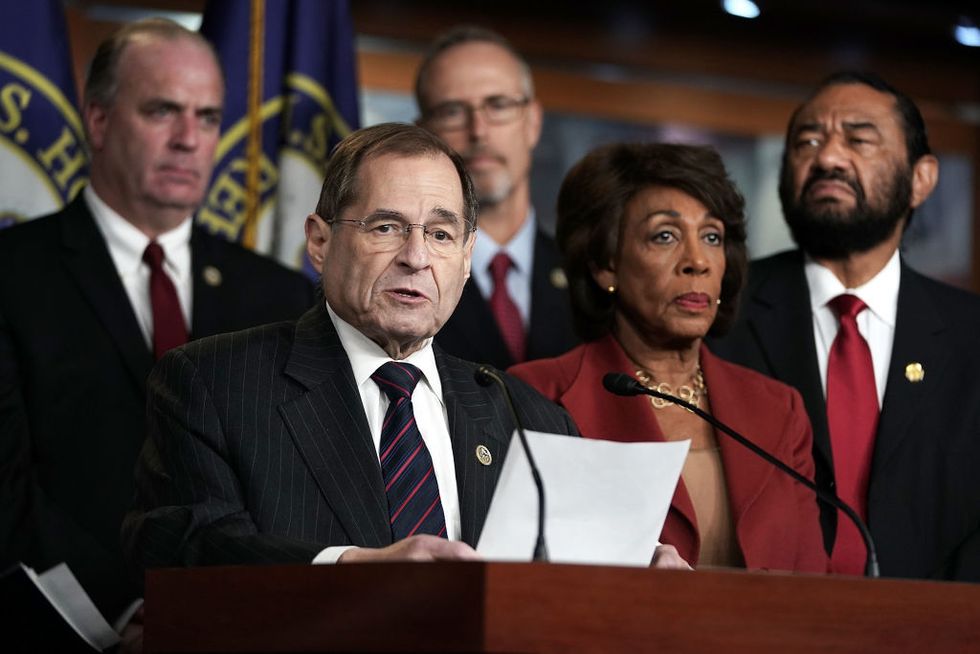 House Democrats have rallied behind special counsel Robert Mueller, sending a signal to both President Donald Trump and the members of the Republican Party who have attempted to discredit him and his investigation into Russian interference in last year's presidential election.

171 of the 193 Democrats in the House said they support Mueller’s probe in a letter to Justice Department Deputy Attorney General Rod Rosenstein. The legislators urged Rosenstein to allow the investigation to continue “unfettered by political influence or threats to his authority."

The full text can be found HERE, and key sections have been featured below:

It is unimaginable that Republicans would seek to intervene, discredit, obstruct, or terminate the Special Counsel’s investigation. Thus far, from every public indication, it appears that Mr. Mueller is conducting a thorough and methodical investigation.  He and his investigators have not sought, and instead avoided, the public spotlight.  His team has not leaked, or hinted at, criminal allegations for which they have yet to develop charges.  Furthermore, the charges that have been filed to date have been sufficiently strong, and well founded, as to elicit guilty pleas from President Donald Trump’s former National Security Advisor, Lieutenant General Michael Flynn, and a former foreign policy adviser to Donald Trump’s presidential campaign, George Papadopoulos...

Mr. Mueller must be allowed to complete his investigation, and should not be threatened with removal.  However, a few Republicans have indicated their support for Mr. Mueller’s ouster.  Notwithstanding the overwhelming reasons for Mr. Mueller to be allowed to continue and complete his investigation, the rule of law demands that the Trump administration follow Executive Branch regulations, which restrict the circumstances under which a special counsel can be removed.  Specifically, 28 CFR § 600.7(d) regarding the removal or discipline of a special counsel provides:

Despite Special Counsel Mueller’s record of integrity, as attested to by these Republican leaders, and despite the clear progress that Mr. Mueller is making in his investigation, the right-wing media, some Republican Members of Congress and Donald Trump, himself, have attempted to advance a false narrative that Special Counsel Mueller’s investigation is biased, and some have advocated for Mr. Mueller’s removal...

Some have alleged that Mr. Mueller’s removal of a member of his team, Peter Strzok, over text messages sent by Mr. Strzok that were critical of President Trump suggests bias or a lack of objectivity on the Special Counsel’s team.  However, upon learning of the text messages, Mr. Mueller immediately removed Mr. Strzok from the investigation. In reality, this incident and Mr. Mueller’s swift response demonstrates Mr. Mueller’s integrity as well as his desire and commitment to conduct an investigation that is beyond reproach.

You must not allow the targets of the investigation, or issues being investigated, to escape thorough independent inquiry through the removal, or hindrance, of the Special Counsel. We thank you for your careful attention to this letter, and we stand ready to support you in upholding the rule of law.

During a press conference yesterday, Representative Maxine Waters (D-CA), one of the president's more vocal critics, assured reporters the investigation would continue. “We will not stand by and allow Fox News and right-wing Republicans to defy the rule of law and create their own rules to interfere with the legitimate investigation under the Constitution of the United States,” she said. She added: “There is an organized effort by Republicans... to spin a false narrative and conjure up outrageous scenarios to accuse Special Counsel Mueller of being biased."

Representative Ted Lieu (D-CA), a vociferous Trump critic, told his House colleagues that Trump will face massive protests and almost certain impeachment should he decide to remove Mueller from the Russia probe. “I urge the president to understand what happened in Watergate and to refrain from taking criminal and unconstitutional actions,” Lieu said on the House floor.

Later, during an appearance on MSNBC, Lieu said firing Rosenstein and Mueller would be seen as obstruction of justice.

Republicans and talk show hosts on Fox News have accused Mueller and his team of bias since the early stages of the investigation. Last weekend, Jeanine Pirro, the host of Justice with Judge Jeanine on Fox News, made national headlines after she called for a “cleansing” of the FBI and Department of Justice.

“There is a cleansing needed in our FBI and our Department of Justice,” Pirro said at the time. “It needs to be cleansed of individuals who should not just be fired but who need to be taken out in handcuffs.”

Claiming “political hacks” have infiltrated both agencies, she singled out special counsel Robert Mueller and other officials, saying they should be arrested for their attempts to “destroy the republic.”

“The stench coming out of the Justice Department and the FBI is like that of a third-world country where money and bullies and clubs decide elections,” she said. “It all started with cardinal [James] Comey destroyed our FBI with political hacks to set events in motion to destroy the republic because they did not like the man we chose to be our president.”

Rumors that President Trump may fire Mueller have persisted; earlier this week, the president insisted he would not remove Mueller from the investigation, even as his attorneys raised objections to Mueller obtaining emails from Trump transition officials.

In a statement, Trump's lawyer, Ty Cobb, also doubled down: “For five months or more, the White House has persistently and emphatically stated there is no consideration of firing the special counsel, and the White House willingly affirms yet again, as it has every day this week, there is no consideration being given to the termination of the special counsel."

When asked by a member of the committee if the president has asked him to remove Mueller from the investigation, Rosenstein was adamant: "I am not going to be discussing my communications with the President but I can tell you that nobody has communicated to me the desire to remove Robert Mueller," he said.