Rand Paul Just Announced That He Delivered a Letter From Trump to Putin, and the White House Response Is Raising Questions 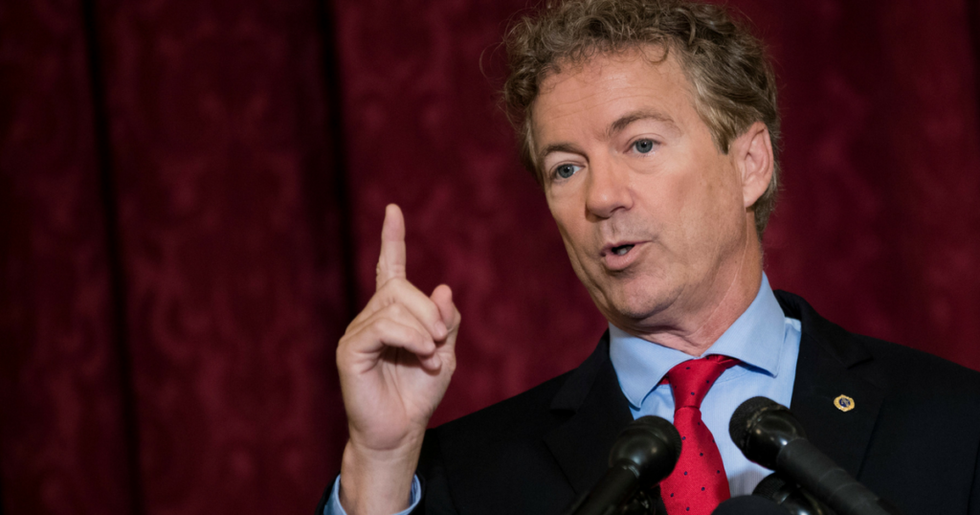 WASHINGTON, DC - OCTOBER 12: Sen. Rand Paul (R-KY) speaks during a press conference regarding the executive order President Donald Trump signed earlier on Thursday, on Capitol Hill, October 12, 2017 in Washington, DC. The executive order is intended for small businesses, and potentially individuals to be able to band together to get insurance in smaller groups, possibly across state lines. (Photo by Drew Angerer/Getty Images)

The Kentucky Republican tweeted on Wednesday that the letter "emphasized the importance of further engagement in various areas including countering terrorism, enhancing legislative dialogue and resuming cultural exchanges."

CNN's Kaitlan Collins reported Trump wrote the letter to Putin "at Senator Paul's request" to serve as an "introduction" of the Senator to Putin.

The White House says Rand Paul asked Trump to give him a letter to give to Putin? “At Senator Paul’s request, Pres… https://t.co/8iBtDLqq6u
— Kaitlan Collins (@Kaitlan Collins) 1533747211.0

Collins also said sources told her the letter contained "things Paul wanted to discuss, not topics Trump asked him to bring up," which is the opposite of what Paul insinuated in his tweet.

I'm told Rand Paul asked Trump to write this letter bc he wanted to set up a meeting with Putin. The topics laid ou… https://t.co/im3SNHcmbq
— Kaitlan Collins (@Kaitlan Collins) 1533748930.0

The specific substance of the letter has not been made publicly available. There are some guesses as to what it contains, though.

Twitter roasted Paul for deciding to be Trump's "mailman."

Needless to say, people are wondering what has spurned Paul's sudden affection for Russia.

Trump's White House would never contort the truth. Ever.

@kaitlancollins everyone with knowledge of the letter is a reliable narrator who would never distort facts, so what… https://t.co/hOP3f7TVqi
— Connor Lynch (@Connor Lynch) 1533749211.0

@kaitlancollins Usually this Administration is a pretty straight shooter, so I think we can all just take everybody's word on this stuff.
— kj (@kj) 1533749040.0

Where is Ambassador Jon Huntsman and why is Paul doing his job?

@kaitlancollins This is weird why is Paul doing this instead of Jon Huntsman?
— Tony Morelli (@Tony Morelli) 1533749422.0

Why not send Putin an email instead? Oh right...

In any other time, this hypothesis would sound crazy. But here we are.

Paul traveled to Moscow on Monday to meet with members of the Russian Parliament in what he claimed was an effort to continue diplomatic outreach initiated by Trump.

Paul then invited Russian lawmakers to Washington to push further cooperation between the United States and Russia.

"I am pleased to announce that we will be continuing this contact," Paul said in Moscow. "We agreed and we invited members of the Foreign Affairs Committee of Russia to come to the US to meet with us in the US, in Washington."

The Senator emphasized his goal to "establish a dialogue and solve issues."

"We had general discussions about a lot of issues and basically we've decided that right now we will try to establish a dialogue and solve issues," Paul said, adding that the "biggest issue right now there is no dialogue, issues that we can't even have a discussion about because we have no dialogue."