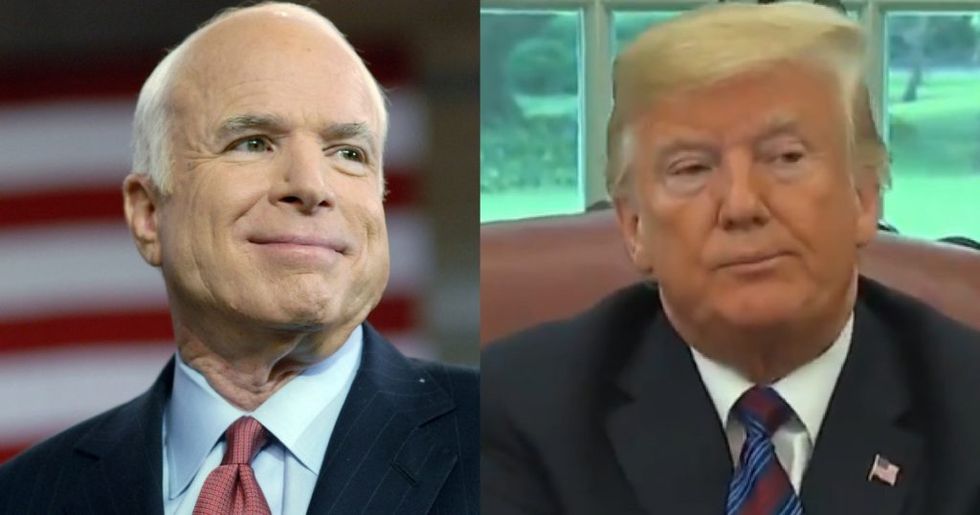 Even after death, Senator John McCain appears to be sticking it to President Donald Trump.

Politico reported on Tuesday that McCain had planned his funeral prior to his death and that he had chosen Vladimir Kara-Murza, a Russian dissident and critic of Russian President Vladimir Putin, to be one of his pallbearers.

Even in death, John McCain has one final burn planned for two of his biggest foes — Vladimir Putin and Donald Trump… https://t.co/raLvldUfCF
— POLITICO (@POLITICO) 1535488269.0

"The choice of Kara-Murza, who twice suffered organ failure from poisoning, appears aimed at sending a last message to Putin and Trump," Politico said, "who McCain had criticized for sounding too cozy with the Russian leader, amid an investigation into whether the U.S. president’s allies cooperated with Moscow’s efforts to intervene in the 2016 election."

For more than seven years, @SenJohnMcCain and Vladimir Kara-Murz aka @vkaramurza had each other’s backs as each cri… https://t.co/uHeck00Q9k
— Josh Meyer (@Josh Meyer) 1535513760.0

Kara-Murza was asked to be a pallbearer in April as McCain's battle with glioblastoma, a form of brain cancer, continued to rage.

"I was speechless and heartbroken, close to tears at that moment," Kara-Murza told POLITICO on Tuesday. "I said yes, of course, and that it would be the most heartbreaking honor that anyone could think of."

Kara-Murza added that even though McCain wasn't planning on dying anytime soon, the Senator "knew how it was going to end, and he was planning everything."

@politico @yashar Did not know that a corpse was capable of thrusting up both middle fingers, but trust John McCain to figure it out!
— MmeDF (@MmeDF) 1535549497.0

Message to America: wake up.

@politico To me it says that Americans need to unify and we also need to support other democracies and those strugg… https://t.co/fp4WU7dilw
— christie 💫 (@christie 💫) 1535507612.0

One Twitter user noticed that in McCain's farewell letter, the Senator referenced "blood and soil," which was part of the racial purity philosophy adopted by the Nazis.

"We are citizens of the world's greatest republic, a nation of ideals, not blood and soil," McCain wrote.

@politico Interesting that he used the phrase “blood and soil” in his farewell letter. He would not have used it u… https://t.co/xB5y4MhVaU
— betty pankowski (@betty pankowski) 1535519491.0

McCain and Kara-Murza met in 2010 and became allies in their opposition to Putin, whom Trump idolizes and routinely defends. Trump has sided with Putin's denials that Russia interfered in the 2016 presidential election despite overwhelming evidence and consensus among American intelligence agencies.

Kara-Murza was nearly poisoned to death - twice - because of his criticism of Putin.

On Monday Kara-Murza told the Washington Post that knowing McCain was one of his life's highest honors.

"We all knew this day was coming, but hoped against hope that it would not be coming so soon," he said. "He was a true leader and a dear friend, and it will always be among the greatest blessings of my life to know him."