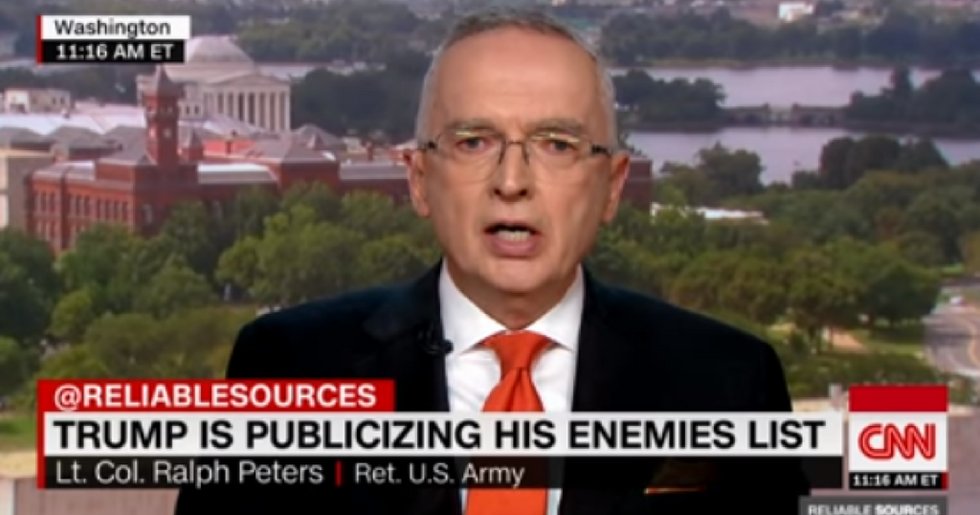 Stelter asked Peters: "How much do you blame your former network Fox News? Are they at fault for propping up Trump?"

"Fox isn’t immoral, it’s amoral," Peters added. "It was opportunistic. Trump was just a gift to Fox and Fox, in turn, is a gift to Trump. It’s a closed loop. And so people that only listen to Fox have an utterly skewed view of reality."

Stelter: "Do you think your former colleagues are proud of their performances?"

"The polite word is ‘prostitutes’," Peters added. "So, we’ll just leave it at that. I don’t want to be the go-to guy for Fox bashing forever. But what Fox is doing is causing real harm to our country right now."

Peters had harsh words for Trump and the Republican Party as well.

The president "is not interested in understanding our government," Peters told CNN. "He believes the Constitution is a menu from which he can choose only the most delectable items."

Peters said Trump's behavior leads him to believe Trump is in the pocket of Russian President Vladimir Putin.

Trump and Fox News need and feed off each other, a former analyst for the network said https://t.co/6oZ5oCJXps https://t.co/TEFNYovOqg
— Newsweek (@Newsweek) 1534733107.0

"The evil twin of that, I believe as a former Russia analyst for most of my career… I’m convinced that the president of the United States is in thrall to Vladimir Putin," Peters continued. "There’s no other way to explain his behavior. And he perfectly fits the profile of the kind of people the Russians target. “This is a distinctly un-American president who doesn’t seem to like America very much. I never could have foreseen this Orwellian situation."

Peters described the Republican Party as "dormant," having been taken over by "couch potato anarchists" who "don't have a program to make America great again."

@ReliableSources I am not a Russian analyst, former or otherwise, and I am also convinced that Trump is in thrall to Vladimir Putin.
— Val (@Val) 1534767337.0

And they seconded Peters' thoughts about Fox News:

Peters left Fox News in the spring and criticized the network for its biased coverage of the president's transgressions.