Ted Cruz Was Caught Looking at a Picture of Beto O'Rourke on His Phone, and the Internet Can't Stop Mocking Him 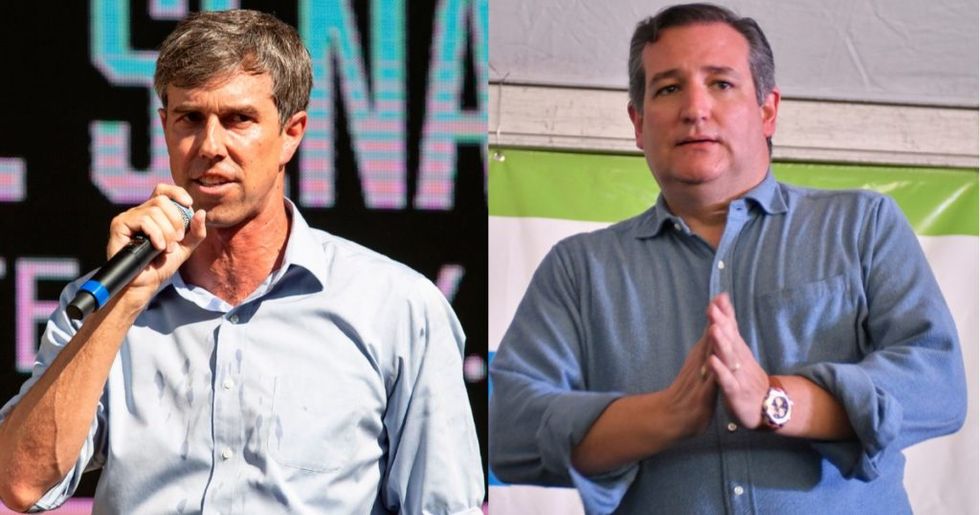 Senator Ted Cruz (R-TX) was photographed on a flight from Washington, D.C. back to Texas looking at a web page with a photo of Beto O'Rourke, the Democrat Representative who is running to unseat him in the upcoming midterm elections.

Cruz was snapped by a photographer with Politico Playbook.

Cruz, once considered a shoo-in for re-election, has found a formidable challenger in O'Rourke, with whom he's now locked in a neck-and-neck race for the Senate seat, according to recent polling figures.

The photographs quickly made the rounds on social media, and Cruz was routinely mocked.

The reaction to the photographs is only the latest bump in an already hard week for Cruz, who last night was driven out of a Washington restaurant by activists who chanted, “We believe survivors!” in response to the sexual assault allegations which have imperiled Supreme Court nominee Brett Kavanaugh's confirmation. Cruz was also criticized for not responding to a sexual assault survivor who asked him how he would on Kavanaugh.

"God bless you, ma'am," was all Cruz said before he and his wife left the establishment.

Earlier this morning, O'Rourke responded to the incident in a tweet of his own urging Cruz's critics to take the high road.

Not right that Senator Cruz and his wife Heidi were surrounded and forced to leave a restaurant last night because… https://t.co/NyIna3MPyE
— Beto O'Rourke (@Beto O'Rourke) 1537883662.0

O'Rourke's defense came just a few days after the two sparred during a debate at Southern Methodist University in Dallas.

Cruz characterized O'Rourke as "out of step with the people of Texas" who wants to side with progressives like Alexandria Ocasio-Cortez, abolish Immigrations and Customs Enforcement, infringe on Second Amendment rights, and impeach President Donald Trump.

O'Rourke, by contrast, accused Cruz of caring more about tax cuts than for Texans and called him out for spending more time campaigning in states like Iowa than addressing the concerns of the people in his state.

"In 2016, he missed half of the votes in the United States Senate," O'Rourke said. "You tell me who can miss half of the days of work and still be rehired for the same job going forward. That's not what Texans want."

Cruz was also harshly criticized by New York Times opinion columnist Bret Stephens, who laid out reasons why he despises him:

Because he’s like a serpent covered in Vaseline. Because he treats the American people like two-bit suckers in 10-gallon hats. Because he sucks up to the guy who insulted his wife — by retweet, no less. Because of his phony piety and even phonier principles. Because I see him as the spiritual love child of the 1980s televangelist Jimmy Swaggart and Jack Nicholson’s character in “The Shining.” Because his ethics are purely situational. Because he makes Donald Trump look like a human being by comparison. Because “New York values.” Because his fellow politicians detest him, and that’s just among Republicans. Because he never got over being the smartest kid in eighth grade. Because he’s conniving enough to try to put one over you, but not perceptive enough to realize that you see right through him. Because he’s the type of man who would sell his family into slavery if that’s what it took to get elected. And that he would use said slavery as a sob story to get himself re-elected.

Cruz has rallied his supporters in response.