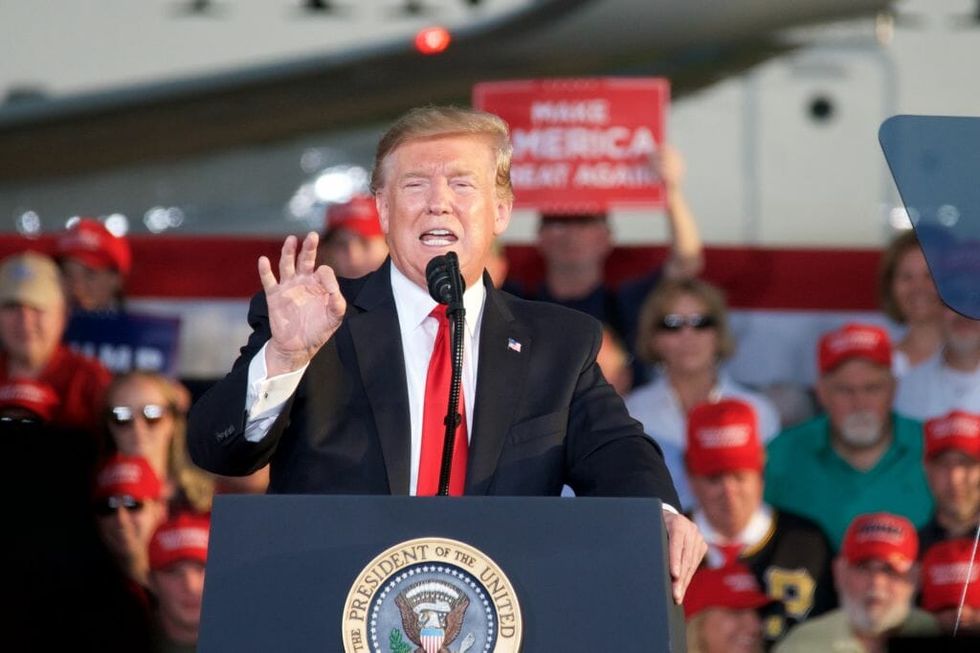 President Donald J Trump holds a MAGA rally at the Williamsport Regional Airport, in Montoursville, PA on May 20, 2019. (Photo by Bastiaan Slabbers/NurPhoto via Getty Images)

President Donald Trump is headed to Orlando on Tuesday for a major MAGA rally to launch his 2020 re-election campaign.

"Big Rally tomorrow night in Orlando, Florida, looks to be setting records. We are building large movie screens outside to take care of everybody. Over 100,000 requests. Our Country is doing great, far beyond what the haters & losers thought possible - and it will only get better!"

But the Orlando Sentinel had a welcome in store for the President. On Tuesday morning, the newspaper, which has often endorsed Republicans for president in the past, issued an editorial titled:

"Our Orlando Sentinel endorsement for president in 2020: Not Donald Trump"

What Trump might see if he picks up the @orlandosentinel during his visit today... https://t.co/ZkNZjHgbpO
— Brian Stelter (@Brian Stelter) 1560870119.0

They began their editorial by stating:

"Donald Trump is in Orlando to announce the kickoff of his re-election campaign."

"We’re here to announce our endorsement for president in 2020, or, at least, who we’re not endorsing: Donald Trump."

"Some readers will wonder how we could possibly eliminate a candidate so far before an election, and before knowing the identity of his opponent."

"Because there’s no point pretending we would ever recommend that readers vote for Trump."

From there they listed all the reasons they could not endorse President Trump for reelection.

"Enough of the chaos, the division, the schoolyard insults, the self-aggrandizement, the corruption, and especially the lies."

The lies the President has told—easily disproven claims and outright falsehoods—were a major bone of contention for the Sentinel editorial team.

"So many lies — from white lies to whoppers — told out of ignorance, laziness, recklessness, expediency or opportunity."

"Trump’s capacity for lying isn’t the surprise here, though the frequency is."

"It’s the tolerance so many Americans have for it."

"There was a time when even a single lie — a phony college degree, a bogus work history — would doom a politician’s career."

The Orlando Sentinel team included the links to refute some of the lies they took exception to.

"Not so for Trump, who claimed in 2017 that he lost the popular vote because millions of people voted illegally (they didn’t). In 2018 he said North Korea was no longer a nuclear threat (it is). And in 2019 he said windmills cause cancer (they don’t). Just last week he claimed the media fabricated unfavorable results from his campaign’s internal polling (it didn’t)."

The Sentinel referenced The Washington Post's records for Trump's untruths. Their editorial then stated:

"Trump’s successful assault on truth is the great casualty of this presidency, followed closely by his war on decency."

The Orlando Sentinel also took great issue with the President's conduct in regards to political rivals or anyone who fails to praise him.

"Trump insults political opponents and national heroes alike with middle-school taunts. He demonstrates no capacity for empathy or remorse."

"He misuses his office to punish opponents, as when he recently called for a boycott of AT&T to get even with his least favorite media outlet, CNN. He tears down institutions, once airily suggesting the U.S. should try having a leader for life as China now allows."

"He seems incapable of learning a lesson, telling an ABC interviewer last week — just two months after Robert Mueller’s report on election interference was released — that he would accept dirt on an opponent from Russia or China."

The Sentinel editorial board added:

"Trump has diminished our standing in the world. He reneges on deals, attacks allies and embraces enemies."

Not to be confused for a liberal-leaning organization, the Orlando Sentinel pointed out their long history of endorsing Republican nominees including endorsing Romney over Obama in 2012 and for decades before then.

"This newspaper has a history of presidential appointments favoring Republicans starting in the mid-20th century. Except for Lyndon Johnson in 1964, the Sentinel backed Republican presidential nominees from 1952 through 2004, when we recommended John Kerry over another four years of George W. Bush."

They concluded their editorial by stating:

"The nation must endure another 1½ years of Trump. But it needn’t suffer another four beyond that."

The President has yet to strike back at the Orlando Sentinel for their endorsement of anyone but Trump.

Other conservative sources have come out strongly opposed to the President. Republican strategist Rick Wilson wrote Everything Trump Touches Dies: A Republican Strategist Gets Real About the Worst President Ever, available here.

"A respected, long-time Republican strategist, ad-maker, and contributor for The Daily Beast, skewers the disease that is destroying the conservative movement and burning down the GOP: Trumpism."

If you share the Orlando Sentinel's endorsement, Takei Tees offers a shirt to express that:

Get your ANY FUNCTIONING ADULT 2020 shirt here.