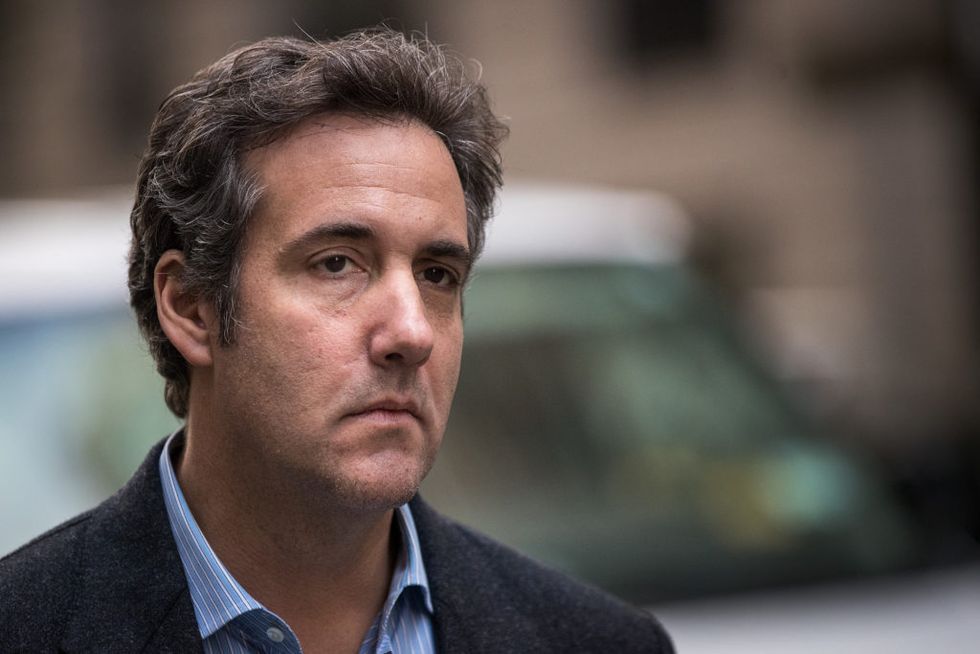 NEW YORK, NY - MAY 11: Michael Cohen, former personal attorney for U.S. President Donald Trump, exits the Loews Regency Hotel, May 11, 2018 in New York City. AT&T CEO Randall Stephenson said this week that it was a mistake to hire Cohen as a consultant it was revealed they paid him $600,000 last year. (Photo by Drew Angerer/Getty Images)

In 2013, Michael Cohen, the embattled former attorney and fixer for President Donald Trump, sent an email to The Onion asking the satirical publication to "cease and desist" writing about Trump after it printed a column titled, “When You’re Feeling Low, Just Remember I’ll Be Dead In About 15 Or 20 Years.”

Cohen's letter said that The Onion article was an "absolutely disgusting piece that lacks any place in journalism; including in your Onion." Cohen then demanded that the paper "immediately remove" the piece, which was satire, "from your website," and that it should "issue an apology to Mr. Trump."

This commentary goes way beyond defamation and, if not immediately removed, I will take all actions necessary to ensure your actions do not go without consequence. Guide yourself accordingly.

Five years later, The Onion decided to finally read the email, in which Cohen accuses the paper of defamation against Trump (incidentally, satire is not legally defamatory), demanding that the article is removed from the publication's website.

The Onion defended its piece, firing back that the paper was offering "over 10 billion readers who had found themselves depressed about the state of the world a hopeful reminder that he would mentally and physically deteriorate and most likely die very soon."

In their response, The Onion offered Cohen a quid pro quo deal—that they would remove the piece on Trump in exchange for "influence over the president's decision-making." Earlier this month, it was revealed that Trump holds nightly phone calls with Fox News personality Sean Hannity, with whom he bemoans Special Counsel Robert Mueller's investigation into possible collusion with Russia during the 2016 presidential campaign. Speculation about Hannity's possible influence over the president has swirled, given Trump's propensity for listening to and hiring Fox News pundits.

We believe the removal of the piece in exchange for influence over the president’s decision-making constitutes a more than reasonable deal, and we implore Mr. Cohen to meet with us without delay. We are happy to schedule around his upcoming court appearances.

The Onion added that they have tried to reach Cohen at the phone numbers he provided but to no avail. "After receiving no reply, we can only assume you are trying to stonewall us," they said.

We believe that a partnership between us and Mr. Trump, shepherded by your steady hand, is the most fruitful way forward for the president, for The Onion, and for America.

We eagerly await your reply.

“When You’re Feeling Low, Just Remember I’ll Be Dead In About 15 Or 20 Years" is a blistering referendum on Trumps' character. In the piece, which was penned in the style of Trump himself (including listing him as the author), a fake Trump talks about how great it will be when he eventually dies and includes discussion over how that could potentially happen.

Hey, I’ve got an idea! Let’s try a surefire pick-me-up that is certain to buoy your spirits right this very moment: let’s think of ways I could die! Perhaps I’ll suffer through a slow, excruciating kidney failure that leaves me in profound pain that the doctors just can’t treat. It could be a massive heart attack while I’m delivering a speech to investors, forcing me to clutch my chest in agony and stagger into the audience. It could be Alzheimer’s. Or I could even be diagnosed with a vicious form of cancer that at first appears to be responding well to chemotherapy but then takes a rapid and inescapable turn for the worse.

"So there’s no reason to be wearing a frown, my friend," wrote The Onion. "I will die, and I will die soon. And as long as you remember that, your days will be brighter. I promise."