Barack Obama Just Slammed Donald Trump by Name in His Latest Speech, and People Are Cheering 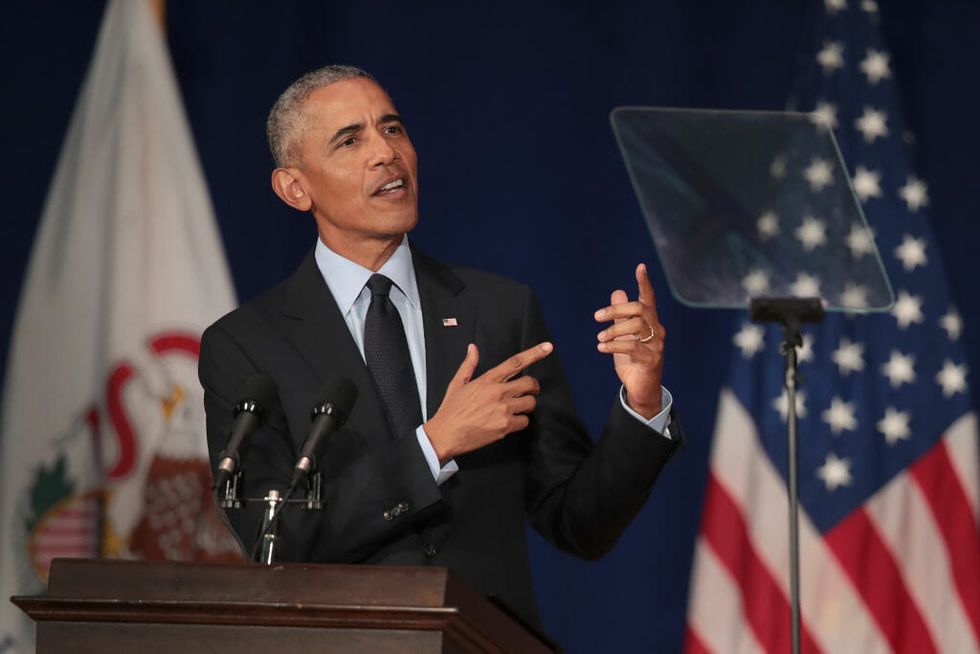 URBANA, IL - SEPTEMBER 07: Former President Barack Obama speaks to students at the University of Illinois where he accepted the Paul H. Douglas Award for Ethics in Government on September 7, 2018 in Urbana, Illinois. The award is an annual honor given by the university's Institute of Government and Public Affairs to recognize public officials who have made significant contributions in public service. (Photo by Scott Olson/Getty Images)

In a speech which kicked off his midterm campaigning at the University of Illinois Urbana-Champaign, former President Barack Obama openly rebuked President Donald Trump by name for the first time, saying that Trump poses such a threat to the United States that he felt compelled to speak out.

"I’m here today because this is one of those pivotal moments when every one of us as citizens of the United States need to determine just who we are, what it is that we stand for," Obama said. "As a fellow citizen, not as an ex-president, I’m here to deliver a simple message, which is that you need to vote, because our democracy depends on it."

Saying the nation is in a "backlash" moment, Obama added:

You happen to be coming of age during one of those moments. It did not start with Donald Trump ― he is a symptom, not the cause. He is just capitalizing on resentment that politicians have been fanning for years. A fear, an anger that is rooted in our past but is also borne in our enormous upheavals that have taken place in your brief lifetimes.

Obama was adamant that Trump and his supporters have capitalized on the "politics of fear and resentment" by refusing to play hardball with Russia over its attacks on the democratic process, emboldening white supremacists in the wake of last year's "Unite the Right" rally in Charlottesville and politicizing law enforcement agencies.

“None of this is conservative,” Obama told the audience. “I don’t mean to pretend I’m channeling Abraham Lincoln now but that’s not what he had in mind, I think, when he helped form the Republican Party. It’s not conservative. It sure isn’t normal. It’s radical. It’s a vision that says the protection of our power and those who back us is all that matters even when it hurts the country.”

“It should not be Democratic or Republican, it should not be a partisan issue to say that we do not pressure the attorney general or the F.B.I. as political cudgel to punish our political opponents,” he added. “Or to explicitly call on the attorney general to protect members of our own party from prosecution because an election happens to be coming up. I’m not making that up. That’s not hypothetical.”

Obama also had harsh criticisms for the senior administration official who published an anonymous op-ed in the New York Times calling themselves a member of the “Resistance” within the Trump administration.

"That is not a check. That’s not how our democracy’s supposed to work. These people aren’t elected,” he said. “They’re not doing us a service by actively promoting 90 percent of the crazy stuff that’s coming out of this White House, and saying, ‘Don’t worry, we’re preventing the other 10 percent.’”

Most importantly, Obama told his audience: Vote. Hashtags and "ironic detachment" are not enough, he said.

To those who've expressed their apathy about the voting process, Obama said, "Don't tell me your vote doesn't matter... and if you thought elections don't matter, I hope these last two years have corrected that impression.

Obama's speech was met with praise for its "take-no-prisoners" approach to the West Wing's current occupant.

Trump can’t stand being humiliated and right now President Obama is making an art of the humiliation of Trump
— Roland Scahill (@Roland Scahill) 1536338540.0

This speech by Barack Obama is one of the greatest, most timely, and most important, in the history of this country… https://t.co/7DGNzJqNUW
— Scott Dworkin (@Scott Dworkin) 1536339655.0

In the past, Obama has refrained from using Trump's name while criticizing his administration and his policies, keeping with the tradition of past presidents not speaking ill of their successors.

In July, Obama made headlines for comments he made in a speech in Johannesburg, South Africa, during a ceremony commemorating the 100th anniversary of Nelson Mandela’s birth after Trump chose to side with Russian leader Vladimir Putin over the assessment of his own intelligence agencies that Russia sought to subvert the 2016 presidential election and our collective democratic process.

“We see the utter loss of shame of political leaders when they're caught in a lie, and they just double down and lie some more. Politicians have always lied, but it used to be that if you caught them lying, they’d be like, “Aw man.’ Now they just keep on lying," Obama said at the time.

“Look around,” Obama said during another crucial moment. “Strongman politics are ascendant suddenly, whereby elections and some pretense of democracy are maintained, the form of it, but those in power seek to undermine every institution or norm that gives democracy meaning.”

He also jabbed at Trump's habit of rejecting truth and facts.

“It would make me think that you’re a little insecure about your heritage if you’ve got to put someone else’s heritage down,” he said. “Don’t you get a sense sometimes that these people who are so intent on putting people down and pumping themselves up that they’re small-hearted, that there’s something they’re just afraid of?”

“For this to work, we have to actually believe in an objective reality. This is another one of these things I didn’t think I’d have to lecture about: you have to believe in facts,” Obama said. “I can’t find common ground if somebody says climate change is just not happening when almost all the world’s scientists say that it is. I don’t know where to start talking to you about this. If you start saying it’s an elaborate hoax, I don’t know, where do we start?"

President Trump spent last night campaigning for Matt Rosendale, the GOP Senate candidate who is challenging Democratic Senator Jon Tester in Billings, Montana. He drew criticism for his claim that the media “excoriated” former President Abraham Lincoln when he gave the Gettysburg Address in 1863.