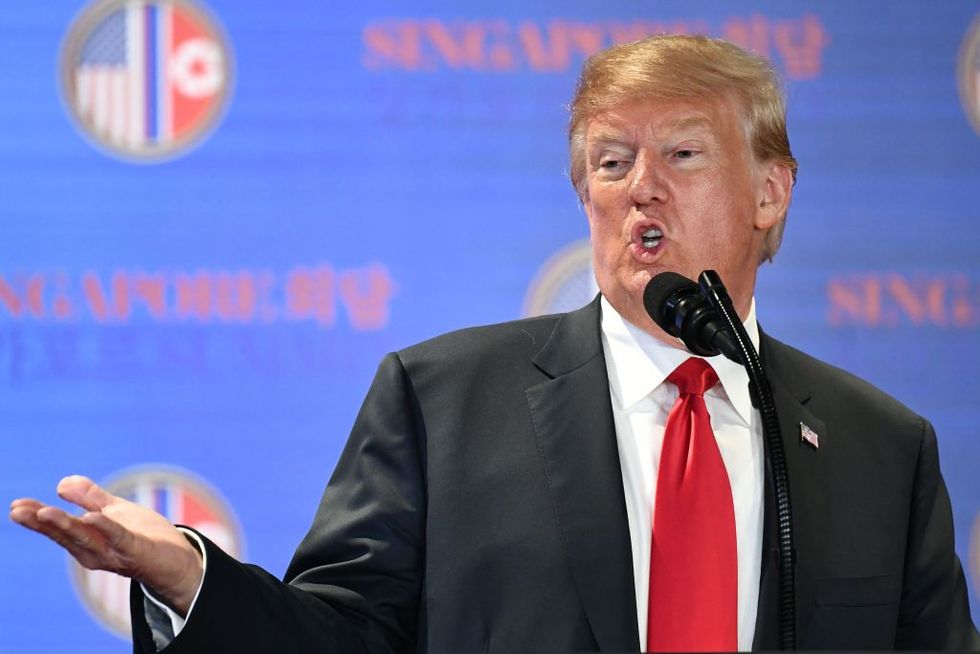 And after New York Attorney General Barbara Underwood sued him and his charitable foundation, alleging that he and his children illegally used it for personal, business, and political expenses, the president responded as he often does: with an outburst on Twitter.

"The sleazy New York Democrats, and their now disgraced (and run out of town) A.G. Eric Schneiderman, are doing everything they can to sue me on a foundation that took in $18,800,000 and gave out to charity more money than it took in, $19,200,000. I won’t settle this case!" the president wrote.

Eric Schneiderman, the "now disgraced" former attorney general to whom the president refers, resigned last month amid claims from several women that he had sexually assaulted them. The president took another shot at him in his next tweet.

"Schneiderman, who ran the Clinton campaign in New York, never had the guts to bring this ridiculous case, which lingered in their office for almost 2 years. Now he resigned his office in disgrace, and his disciples brought it when we would not settle," the president claimed.

Schneiderman has not commented on the president's statements, but Barbara Underwood, who assumed Schneiderman's position following his resignation, has remained firm on the integrity of her office and its findings.

The AG's investigation "found that the Trump Foundation raised in excess of $2.8 million in a manner designed to influence the 2016 presidential election at the direction and under the control of senior leadership of the Trump presidential campaign," reads a message from the official Twitter account of the New York Attorney General.

The AG's investigation alleges that "senior Trump campaign staff"––including Corey Lewandowski, the president's embattled former campaign manager––"dictated the timing, amounts, and recipients of grants by the Foundation to non-profits."

Self-dealing, which the Trump Foundation's alleged crimes fall under, is defined as "the conduct of a trustee, attorney, corporate officer, or other fiduciary that consists of taking advantage of his position in a transaction and acting in his own interests rather than in the interests of the beneficiaries of the trust, corporate shareholders, or his clients."

The Trump Foundation entered into "at least five self-dealing transactions that were unlawful because they benefited Mr. Trump or businesses he controls," the AG continues. (You can read the AG's petition HERE.)

The AG 's office "is seeking restitution of $2.8 million plus penalties" and has "sent referral letters to the IRS and FEC for further investigation and legal action."

The AG is also suing to "dissolve the Trump Foundation under court supervision" and prohibit the president and other members of the foundation's Board of Directors "from serving on the board of any other New York charity."

New York authorities began investigating the Trump Foundation in 2016 following a Washington Post investigation which concluded that reporters had "not been able to verify many of Trump’s boasts about his philanthropy" and that "Trump had sought credit for charity he had not given — or had claimed other people’s giving as his own."

Post investigators also reviewed documented expenditures which revealed that Trump spent $258,000 from his charitable foundation to settle lawsuits that involved his for-profit businesses.

The other expenditures concern smaller amounts.

In 2013, Trump used $5,000 from the foundation to purchase advertisements for his hotel chain in programs for several events organized by a Washington, D.C. preservation group. In 2014, he used $10,000 of the foundation’s funds to purchase a portrait of himself at a charity fundraiser, but that portrait was not the first: According to Trump’s tax records, he spent a total $20,000 for a six-foot-tall portrait of himself. He also paid $12,000 for a football helmet signed by Tim Tebow, who played for the Denver Broncos at the time.

The evidence suggests that Trump ran his charity in a way that violated United States tax law. If Trump did violate self-dealing rules, the IRS could require him to pay penalty taxes or to reimburse the foundation the total amount of money it spent on his behalf. The office of the New York attorney general will lead an investigation into whether Trump’s foundation broke state charity laws. In 2016, when asked whether its inquiry would look into possible self-dealing, the attorney general’s office declined to comment.