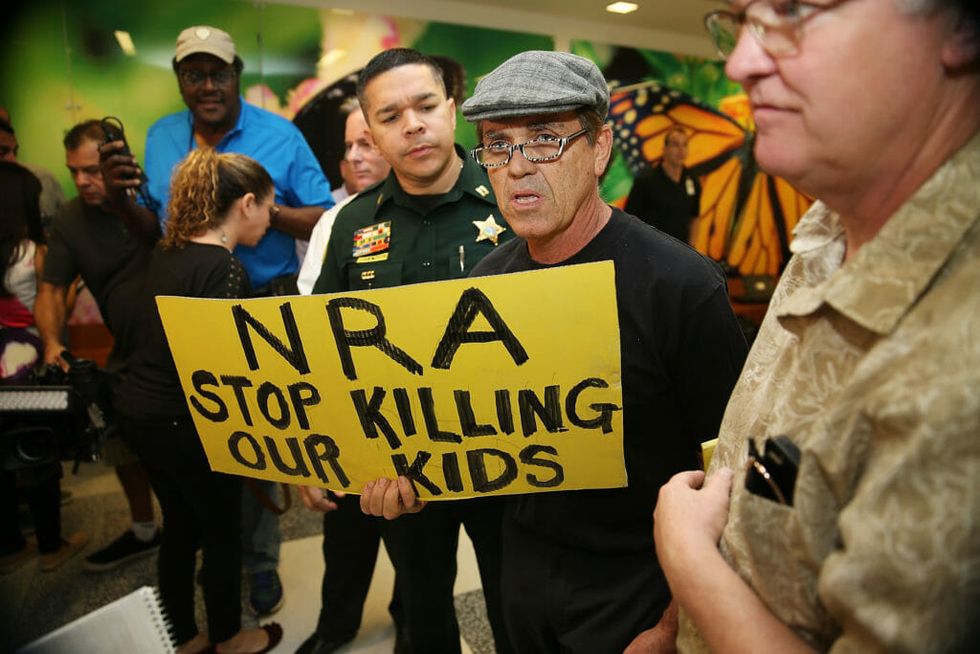 FORT LAUDERDALE, FL - FEBRUARY 15: A protester holds a sign that reads, 'NRA Stop Killing Our Kids', outside the court-room where Nikolas Cruz, 19, a former student at Marjory Stoneman Douglas High School in Parkland, Florida, was having a bond hearing in front of Broward Judge Kim Mollica at the Broward County Courthouse on February 15, 2018 in Fort Lauderdale, Florida. Mr. Cruz is possibly facing 17 counts of premeditated murder in the school shooting. (Photo by Charles Trainor Jr. - Pool/Getty Images)

Following massive protests and echoing a changing tide in American politics, some major businesses have decided to sever business deals with the National Rifle Association. This is all in response to protests following the Valentine's Day school shooting at Marjory Stoneman Douglas High School in Parkland, Florida which left 17 students and staff dead.

The nation's largest privately owned bank, First National Bank of Omaha, issued a statement Thursday afternoon stating that the bank "will not renew its contract with the National Rifle Association to issue the NRA Visa Card."

The move comes amidst backlash from customers, who said that associating with the nation's largest gun lobby put "blood on your hands."

"Thank you for dumping the NRA," Brother Mark replied.

Other customers, like Jean VanDuzer, were appreciative of the bank "valuing children's lives over guns."

FNB seems to be gaining new business customers from the move, like Kathleen Delano, who plans on moving her "BUSINESS ACCOUNT" to FNB.

@FNBOmaha @kakymc @ATSsecured @NRA As a cardholder I am proud to say I am moving my BUSINESS ACCOUNT to @FNBOmaha… https://t.co/zUOQqBqhJK
— Kathleen Delano (@Kathleen Delano) 1519351271.0

Enterprise Holdings, the parent company of Enterprise RentACar, National Car Rental, and Alamo Rent A Car, have also ended their business relationships with the NRA effective in March.

Rental car customers like Tim Peacock asked if the rental giant is "going to continue sponsoring their efforts to stall legislation that could save children's lives?"

“Thank you for contacting us," Enterprise said in multiple statements. "We ended the discount program, effective March 26."

Some people had no idea the relationship existed at all, and Willow Polson is "so glad you're doing the right thing now."

Waves of student-led protests across the country following the Parkland, Florida massacre are inspiring other businesses to reevaluate their relationships with the NRA, too.

Attention @Amazon and @Amazonhelp -- it's been over a week since the Parkland tragedy. Why are you still offering… https://t.co/LH6qKlYUXj
— Warren Leight (@Warren Leight) 1519315216.0

Other users have canceled their Prime memberships entirely over Amazon's association with the NRA. ReSISTER vows to not support Amazon so long as CEO Jeff Bezos, the world's richest man, "decides to stop giving the NRA and NRAtv a platform to spew their lies and violent rhetoric."

And ReSISTER isn't alone. Brooklyn-based actor Denis O'Hare stated the obvious. "The fact that NRAtv exists at all is frightening. The fact that Amazon would stream them is terrifying."

As the nation continues to mourn the loss of 17 lives in Florida, massive protests for gun reform are being planned across the country, mostly by students who are tired of not feeling safe in school. High school students today know not of a pre-9-11 world, nor one where school shootings are not the norm.

The tide is turning.