Robert Mueller Just Explained Why He Didn't Charge Trump, and It Sure Sounds Like an Impeachment Referral 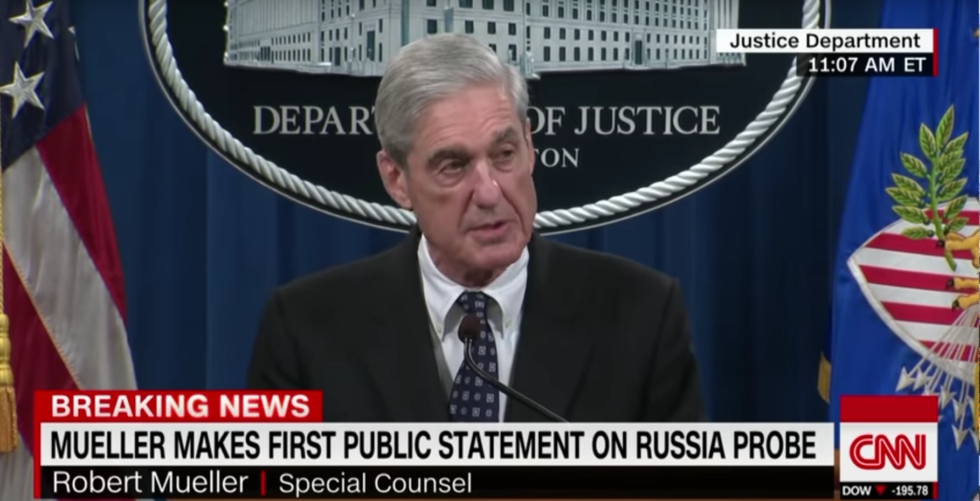 Eyes everywhere were glued to Special Counsel Robert Mueller's surprise press conference in which he elaborated on his report of Russian interference in the 2016 election, as well as President Donald Trump's possible attempts to obstruct it.

While many of the clarifications were readily evident in the report (that Russia actively launched an attack on our electoral process, that the Special Counsel wasn't confident that Trump didn't commit crimes, etc.), one quote is standing out.

"The constitution requires a process other than the criminal justice system to formally accuse a sitting president… https://t.co/inYmX2js4T
— CAP Action (@CAP Action) 1559143177.0

"[T]he Constitution requires a process other than the criminal justice system to formally accuse a sitting president of wrongdoing."

That process would be impeachment. Like virtually all of what Mueller said at Wednesday's press conference, this was indicated in the report as well:

“The conclusion that Congress may apply obstruction laws to the President’s corrupt exercise of the powers of office accords with our constitutional system of checks and balances and the principle that no person is above the law.”

Many are taking the line from the press conference as a tacit referral for impeachment.

Robert Mueller could not be more clear that he believes Congress needs to step up now, explicitly saying that charg… https://t.co/v0VpyLtSbP
— David Jolly (@David Jolly) 1559142629.0

What's left to be seen is if Congress will listen. Democrats remain divided on whether or not impeachment proceedings are the right move going forward. Some worry that impeachment would only serve to discredit Democratic leadership, but Democratic constituents are growing increasingly frustrated.

I'm really tired of this trope sung out by scared and spineless dems that we shouldn't Impeach the Traitor because… https://t.co/cKDEyqTnkn
— Kandice (@Kandice) 1559147867.0

For better or for worse, the calls for impeachment continue to grow.