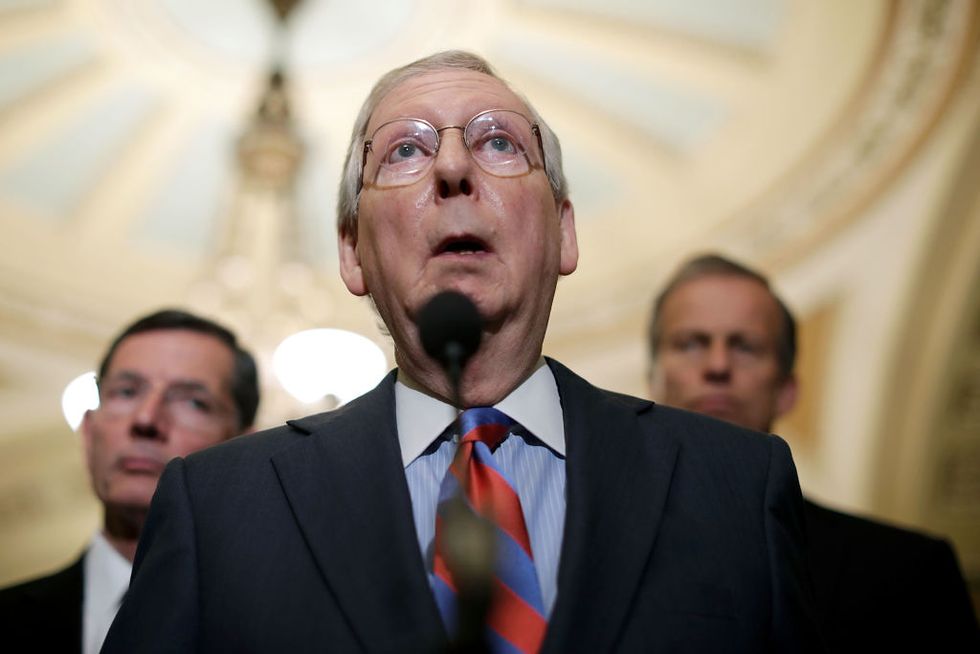 Senate Majority Leader Mitch McConnell (R-KY) took to Twitter to share some rather contradictory advice for his fellow senators the afternoon before President Donald Trump nominated Brett Kavanaugh, a United States Circuit Judge of the United States Court of Appeals for the District of Columbia Circuit, as his next nominee for the U.S. Supreme Court.

Americans see beyond the far-left fear mongering. Senators should do the same. We should evaluate @POTUS’s nominee… https://t.co/6ItmgMwzHY
— Leader McConnell (@Leader McConnell) 1531171726.0

There are several things wrong with this statement.

Although the president had not until earlier yesterday released a public shortlist, Kavanaugh was believed to be under consideration along with Raymond Kethledge, Amy Coney Barrett, and Thomas Hardiman as a top contender to replace Justice Anthony Kennedy, whose sudden announcement that he would retire from the Supreme Court raised fears that abortion rights (Roe v. Wade) and marriage equality (Obergefell v. Hodges) would be on the chopping block.

Nevertheless, Kennedy’s announcement was lauded by many conservatives who view the Supreme Court opening as an opportunity for President Donald Trump to codify his legislative agenda. Liberal opponents have opposed the nomination, citing a precedent set by McConnell, who infamously refused to hold hearings for Merrick Garland, President Barack Obama’s nomination for the high court. At the time, McConnell claimed that the Senate should not confirm Supreme Court nominees during an election year, though he could cite no rules to support this assertion, and accusations that his decision was informed, at least in part, by racial animus toward Obama have dogged him ever since.

These facts were not lost on many who responded to McConnell's message and charged him with hypocrisy, with some quoting the following tweet, in which McConnell said the American people should have a voice in choosing the next Supreme Court justice before the Senate could start confirmation hearings.

The American people should have a voice in the selection of their next Supreme Court Justice. #Scalia https://t.co/QXHfOpEY6G
— Leader McConnell (@Leader McConnell) 1455410122.0

Needless to say, people are angry.

@SenateMajLdr @POTUS Give the American people the respect & dignity to have a voice in selection of our next Suprem… https://t.co/r8FuUygQIR
— Robyn Ruth (@Robyn Ruth) 1531177106.0

@SenateMajLdr @POTUS Giving Merrick Garland a hearing would have been a fair way to evaluate him, but you refused.
— jordan (@jordan) 1531171772.0

Others have expressed outrage at the notion that a president under federal investigation could nominate someone with the potential to sway the court’s opinion in the event of an indictment.

To that end, it's obvious why the president ultimately picked Kavanaugh, who is perhaps best known for the leading role he played in drafting the Starr report, which advocated for the impeachment of President Bill Clinton and whose views about when to impeach a president are likely to become contentious subjects during his Senate confirmation hearing.

The president, meanwhile, has taken to tweeting rather proudly of his Supreme Court pick, at one point gloating about Kavaugh's "GREAT" reviews.

Kavanaugh made a name for himself as a member of President George W. Bush’s administration, serving for two years as Senior Associate Counsel and Associate Counsel to the President and as Assistant to the President and as the White House Staff Secretary thereafter. There was some controversy after Bush first nominated Kavanaugh to the United States Court of Appeals for the District of Columbia Circuit; Kavanaugh’s nomination stalled in the Senate for three years on charges that he was too partisan. He was eventually sworn in by Justice Anthony Kennedy, for whom he had previously clerked, and whose seat he now assumes.

Some senators, including Elizabeth Warren (D-MA) and Chuck Schumer (D-NY) have already indicated they will oppose Kavanaugh's nomination.

Brett Kavanaugh's record as a judge and lawyer is clear: hostile to health care for millions, opposed to the CFPB &… https://t.co/s84RjrKlRt
— Elizabeth Warren (@Elizabeth Warren) 1531187705.0

Judge Kavanaugh's own writings make clear that he would rule against reproductive rights and freedoms, and that he… https://t.co/BcFeYilDRa
— Chuck Schumer (@Chuck Schumer) 1531184979.0

I'm going to do everything I can to stop Judge Kavanaugh’s nomination—but there are also strong reasons why this pr… https://t.co/H1oJTZDRC7
— Sen. Cory Booker (@Sen. Cory Booker) 1531186595.0

We can’t underscore enough the fact that @realDonaldTrump is a subject of an ongoing criminal investigation & there… https://t.co/skvkgFCELv
— Sen. Cory Booker (@Sen. Cory Booker) 1531186595.0

Booker also attended a rally urging Americans to call their senators and demand that they oppose Kavanaugh's nomination.