Trump's Secretary of State Reportedly Is Delivering a Special Gift to Kim Jong Un From Donald Trump, and Things Just Got Weird 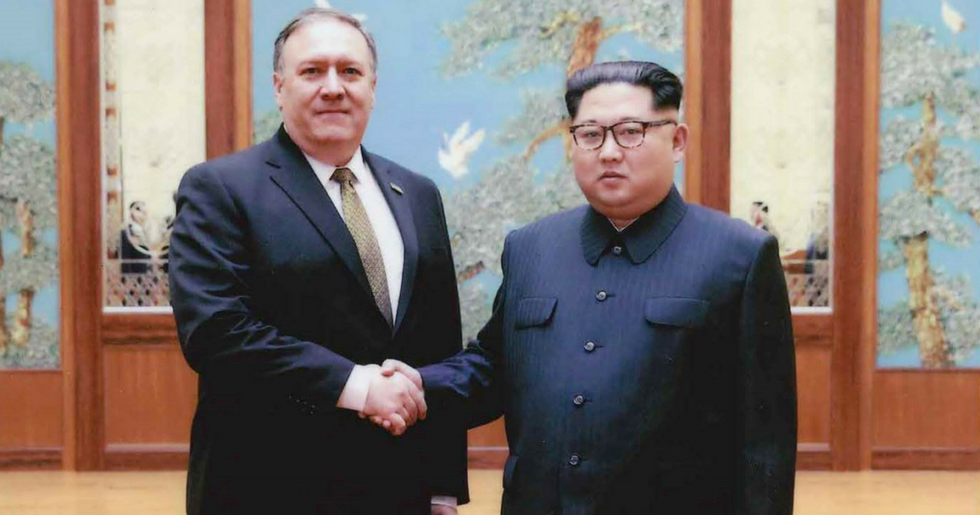 PYONGYANG, NORTH KOREA - UNDATED: In this handout provided by The White House, CIA director Mike Pompeo (L) shakes hands with North Korean leader Kim Jong Un in this undated image in Pyongyang, North Korea. Pompeo, now confirmed as Secretary of State, spoke with Kim for more than an hour during a secret visit over the Easter weekend. (Photo by The White House via Getty Images)

"The 'Rocket Man' CD was the subject of discussion during Trump's lunch with Kim. Kim mentioned that Trump referred to him as 'rocket man' when tensions ran high last year," one diplomatic source in Washington told Chosun Ilbo. "Trump then asked Kim if he knew the song and Kim said no."

Pompeo has neither confirmed nor denied if he brought the CD with him for his two-day visit. On Saturday, State Department Heather Nauert told NBC News that Pompeo was not carrying any such CD. She did confirm the letter from Trump to Kim, however.

South Korean media said the gifts "reflect Trump's expectations that Kim will follow through on the pledges in an agreement the two signed at their summit."

Pompeo's visit will consist of meetings with North Korean leadership to continue the process of trying to convince Kim to give up his nuclear weapons.

National Security Advisor John Bolton said last week that there is a one year plan for denuclearization.

"We have developed a program. I am sure that Secretary of State Mike Pompeo will be discussing this with the North Koreans in the near future about really how to dismantle all of their [weapons of mass destruction] and ballistic missile programs in a year," Bolton said. "If they have the strategic decision already made to do that and they are cooperative, we can move very quickly. And it is to North Korea's advantage to dismantle very quickly. Then the elimination of sanctions, aid by South Korea and Japan and others can all begin to flower."

Last month, however, 38 North reported that North Korea has been ramping up production at its Yongbyon nuclear research facility, detailing new construction and increasing activity at sites used for enriching nuclear material.

NBC News added to these concerns at the end of June. NBC reported that intelligence officials believe Kim "may try to hide" nuclear weapons facilities from inspectors "as he seeks more concessions in nuclear talks with the Trump administration."

Following the June summit in Singapore in which Trump and Kim met for the first time and signed a loosely-worded denuclearization agreement, Trump announced that "there was no longer a nuclear threat from North Korea."

Trump referred to Kim as "Little Rocket Man" on Twitter last year as tensions were escalating between the United States and North Korea over the reclusive country's nuclear weapons program.

Just heard Foreign Minister of North Korea speak at U.N. If he echoes thoughts of Little Rocket Man, they won't be around much longer!
— Donald J. Trump (@Donald J. Trump) 1506222487.0

Fans of Sir Elton weren't happy, saying on Twitter that Trump signing the legendary singer's work and gifting it to a dictator "defaces" the CD.

"What an insult to Elton John."

Others couldn't believe this story wasn't something out of The Onion.

"All the science I don't understand, it's just my job five days a week." How appropriate.