Republicans Have Hired an Outside Prosecutor to Question Christine Blasey Ford on Thursday, and Ford's Lawyer Is Not Having It

He makes some good points. 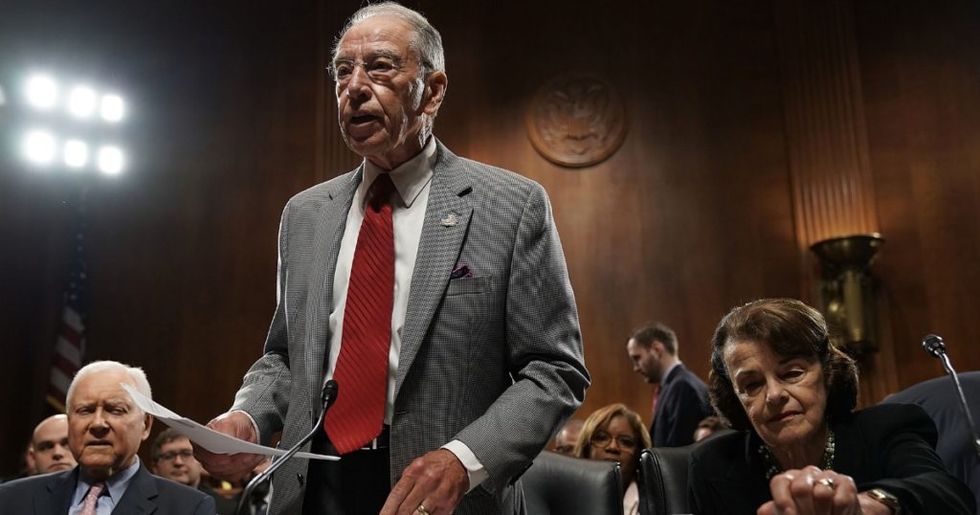 Republicans on the Senate Judiciary Committee have hired an outside prosecutor to question Dr. Christine Blasey Ford about her sexual assault allegations against Brett Kavanaugh. Ford is scheduled to testify before the committee on Thursday.

In a letter to Senator Chuck Grassley (R-IA), chairman of the committee overseeing Supreme Court nominations, Ford's attorney Michael Bromwich argued that the presence of an "experienced sex crimes prosecutor" is not necessary because the Senate hearing isn't a criminal trial.

"This is not a criminal trial for which the involvement of an experienced sex crimes prosecutor would be appropriate," the letter said. "Neither Dr. Blasey Ford nor Judge Kavanaugh is on trial. The goal should be to develop the relevant facts, not try a case."

And Ford's attorney seeks more information about why a Republican members of the committee will have a lawyer ask q… https://t.co/cTujbb6ubL
— Todd Ruger (@Todd Ruger) 1537831914.0

Ford has made "repeated requests through counsel that senators conduct the questioning," which Bromwich claimed are being dismissed with the appointment of a third party lawyer whose identity has not been disclosed.

"The central point is that there is no precedent for this Committee to bring in outside counsel for the sole purpose of shielding the members of the Committee from performing their responsibility to question witnesses," Bromwich said.

Bromwich requested a copy of the prosecutor's resume and a meeting with the individual ahead of Ford's appearance before the committee.

People were impressed with the smackdown.

And disgusted with how Republicans are handling the matter.

Majority Leader Mitch McConnell (R-KY) on Monday brushed off Ford's accusations as nothing more than a "smear campaign."

"Even by the far left's standards, this shameful, shameful smear campaign has hit a new low," McConnell said on the Senate floor. "I want to be perfectly clear about what has taken place. Senate Democrats and their allies are trying to destroy a man's personal and professional life on the basis of decades-old allegations."

"You said in your letter that you intend to provide a 'fair and credible process' that provides Dr. Blasey Ford 'fair and respectful treatment,'" Bromwich wrote in his letter. "Yet earlier today the Majority Leader dismissed Dr. Ford's experience as a 'smear campaign,' claiming mistakenly that the witnesses' statements to the Committee constitute 'a complete lack of evidence,' implying that there has been a thorough investigation. This and statements he has made previously are flatly inconsistent with your letter."

Ford has alleged that during a high school house party in the 1980's, a "stumbling drunk" Kavanaugh pinned her down on a bed and tried to remove her bathing suit. Ford's account also states that Kavanaugh placed his hand over Ford's mouth when she tried to call for help.

Last weekend, a second accuser named Deborah Ramirez said during a party at Yale, Kavanaugh got drunk and exposed himself to her.

Kavanaugh has denied any wrongdoing.

Despite the multiple allegations, Republicans remain intent on holding a confirmation vote on Kavanaugh as quickly as they can.

"I would defer to the chairman but I don't think we would do it on Thursday," John Cornyn of Texas said on Monday. "Friday would be possible, but I'm gonna let him make those announcements."

McConnell has said the Senate will "plow right through" the Kavanaugh accusations and work tirelessly to get him confirmed to the Supreme Court.