Donald Trump Is Lying About Elizabeth Warren's DNA Test, and a Genealogist Just Called Him Out in a Savage Twitter Thread 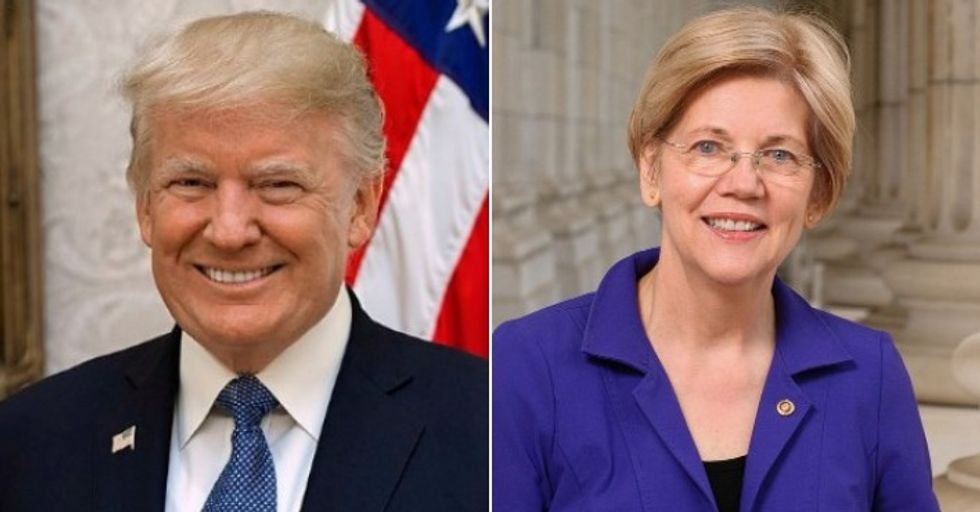 In a July rally in Montana, President Donald Trump challenged Senator Elizabeth Warren to take a DNA test to prove she had a Native American ancestor. Warren stated several times that her mother told her there was an unnamed, unidentified Native ancestor in their family.

Warren made no claim of formal tribal or cultural affiliation except to say her mother thought perhaps the ancestor was Cherokee, but—like many in the United States and Canada—she embraced the family lore of an unidentified Native in the family tree. Seizing on any opportunity to mock or discredit his critics, Trump dubbed Warren Pocahontas and repeatedly mocked her claim.

In an effort to discredit someone he sees as a potential opponent in the 2020 presidential election, President Trump seized on a Harvard made reference to Senator Elizabeth Warren having a Native American ancestor. Then in July he made a statement about someday challenging Warren to take a DNA test and—if she had a Native ancestor—paying $1 million to a charity of her choice.

On Monday, Warren released the results of her testing and told Trump to pay up and shut up.

But when asked about his challenge and her results, Trump initially said "Who cares" and denied his comment about donating to charity. Then on Tuesday morning, Trump took to his favorite form of communication—Twitter—to again use Pocahontas as a racial slur.

Native leaders asked him to stop using the name of a real person as a racial slur every time he uses it.

"Pocahontas (the bad version), sometimes referred to as Elizabeth Warren, is getting slammed. She took a bogus DNA test and it showed that she may be 1/1024, far less than the average American. Now Cherokee Nation denies her, “DNA test is useless.” Even they don’t want her. Phony!"

The President got several things wrong in his tweet, which given his propensity for false statements is unsurprising. But Jennifer Mendelsohn, founder of Resistance Genealogy, happily corrected him.

In a series of tweets, the genealogist laid out the facts for Trump and his supporters repeating his lie on Twitter.

The feedback on Trump's own post was less than supportive of his latest attempt to mock Warren.

People brought up suggestions regarding Trump's own DNA and how he chooses to use his time.

Others brought up that Trump issued the repeated challenges to Warren's claim. Warren was not the one declaring her ethnic or racial identity.

@realDonaldTrump Stop calling her Pocahontas! Stop spreading hate and racism. All you have done as president is bul… https://t.co/LHLhg3qS57
— Sophia Baker🆘 (@Sophia Baker🆘) 1539699083.0

Warren made no claim of tribal affiliation with the Cherokee Nation. Their response aligns with her own, that there is no basis for her to claim Cherokee affiliation or for them to grant her tribal status.

While numerous reputable sources confirmed Warren in no way benefited from her claim of an unnamed Native American in her family tree, Trump and his followers persist with the lie that Warren took benefits in schooling and employment due to her claim.

One person offered their own $1 million challenge to the President.

@realDonaldTrump I will give you $1 million if you can send one entirely accurate tweet.
— David Schaefer (@David Schaefer) 1539700142.0

It appears unlikely any money will be changing hands. Warren offered her own rebuttal in a series of tweets to explain her side of the story.

I get it: @realDonaldTrump is afraid of facts. But I’m not. And the facts are clear. A deep, independent investigat… https://t.co/uzDRWwAXzh
— Elizabeth Warren (@Elizabeth Warren) 1539599786.0

I never expected my family’s story to be used as a racist political joke, but I don’t take any fight lying down. I… https://t.co/H5wMEvYl5f
— Elizabeth Warren (@Elizabeth Warren) 1539599861.0

Warren is up for reelection this year and faces two challengers, Republican Geoff Diehl and independent Shiva Ayyadurai.