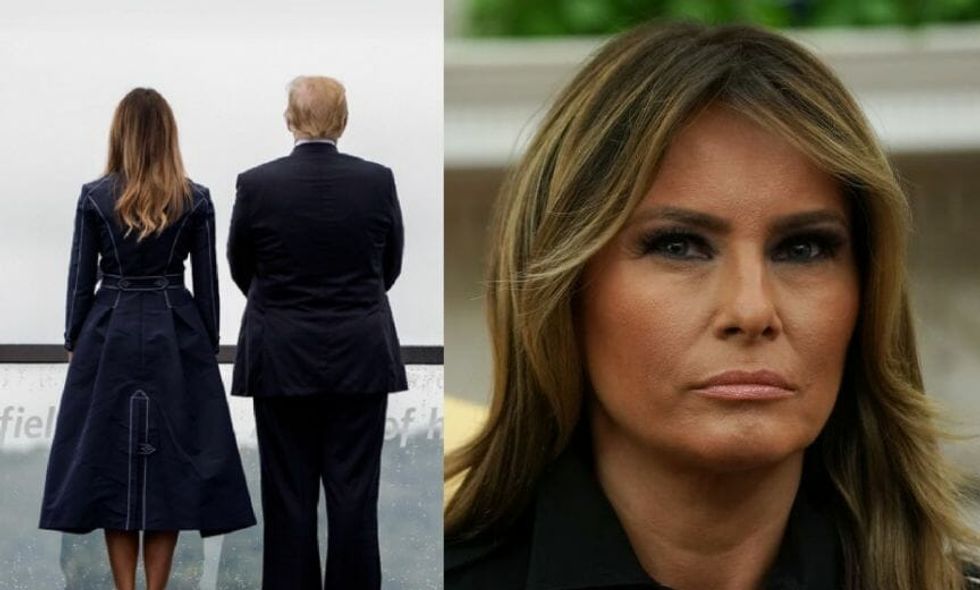 President Donald Trump tweeted a photograph of First Lady Melania Trump and him commemorating the September 11 terrorist attacks, but a detail on the First Lady's coat is raising eyebrows.

Eagle-eyed observers noticed that the white stitching of Melania's coat resembles a skyscraper—and a button flap on top of it resembles a plane, resulting in an unfortunate resemblance to a plane flying into a tower. Not the best look for 9/11.

Check out the photo below.

People were quick to notice the unfortunate design.

Though little more than an unfortunate coincidence, people soon began talking about the coat. White House Press Secretary Stephanie Grisham had a terse response to the observation:

Even Trump's critics were inclined to agree.

@AbeBeeEeeC Does no one know anything about fashion? It’s a stitched pleat with a tab enclosure. I’m a Democrat AND a seamstress!
— Judy Sanders (@Judy Sanders) 1568294041.0

@AbeBeeEeeC Lol. I can see the resemblance but it’s nothing more than a slit in the coat held together with an embr… https://t.co/GnO9DKHBRD
— Brie Urbonas (@Brie Urbonas) 1568250006.0

This isn't the first time Melania Trump's fashion choice has caused controversy. When boarding a plane to a detention center in McAllen, Texas during the family separation crisis, she wore a jacket with the words "I really don't care. Do u?"

It didn't go over well.