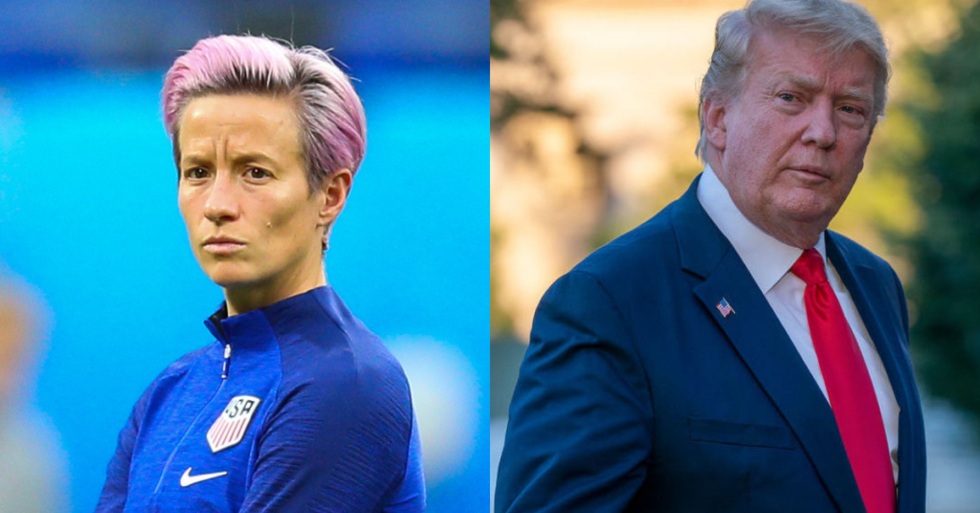 Most people in the United States support the national teams in world events like the Olympics or the Football (soccer) World Cup. But President Donald Trump made it clear he only supports Americans that support him without question.

His critics, regardless of who they are, receive only his ire.

Women's World Cup US team soccer player Megan Rapinoe found that out when old video of her saying she would not go to the White House if the US team won the world championship. Trump reacted as per normal by attacking Rapinoe online, after initially tagging the wrong account.

On Wednesday, Rapinoe finally responded to the criticism of the President and his followers:

"I think I am particularly American and very deeply American, if you want to talk about the ideals that we stand for and what we were founded on. I think I am extremely American."

"I think for the detractors, I would have them look and look hard on what I am actually saying; the actions I am doing. Maybe you don’t agree with every single way that I do it or [what] gets discussed. I know I am not perfect."

Rapinoe's girlfriend, WNBA player Sue Bird, recently wrote an article for The Players' Tribune titled: "So the President F*cking Hates My Girlfriend (and 10 Other Things I Want You to Know Before the World Cup Semifinals)"

In it, Bird answered "the question."

"...I’ll answer The Question. The one that’s probably most on your mind. And by that I mean: What’s it like to have the literal President of the literal United States (of literal America) go Full Adolescent Boy on your girlfriend? Hmm. Well… it’s WEIRD. And I’d say I actually had a pretty standard reaction to it: which was to freak out a little."

"That’s one thing that you kind of have to know about me and Megan: our politics are similar — after we won the WNBA title in Seattle last season, no way were we going to the (f*cking) White House! — but our dispositions are not. And as we’ve been talking through a lot of this 'stuff,' as it’s been happening to her, you know, I’ll be honest here….. some of it scares the sh*t out of me!!"

"I mean, some of it is kind of funny….. but like in a REALLY? REALLY? THIS GUY??? kind of way. Like, dude — there’s nothing better demanding your attention?? It would be ridiculous to the point of laughter, if it wasn’t so gross. (And if his legislations and policies weren’t ruining the lives of so many innocent people.)"

"And then what’s legitimately scary, I guess, is like….. how it’s not just his tweets. Because now suddenly you’ve got all these MAGA peeps getting hostile in your mentions. And you’ve got all these crazy blogs writing terrible things about this person you care so much about. And now they’re doing takedowns of Megan on Fox News, and who knows whatever else. It’s like an out-of-body experience, really — that’s how I’d describe it. That’s how it was for me."

But Rapinoe's reaction was different, according to Bird:

"But then Megan, man….. I’ll tell you what. You just cannot shake that girl. She’s going to do her thing, at her own damn speed, to her own damn rhythm, and she’s going to apologize to exactly NO ONE for it. So when all the Trump business started to go down last week, I mean — the fact that Megan just seemed completely unfazed? It’s strange to say, but that was probably the only normal thing about it. It’s not an act with her. It’s not a deflection. To me it’s more just like: Megan is at the boss level in the video game of knowing herself. She’s always been confident….. but that doesn’t mean she’s always been immune. She’s as sensitive as anyone — maybe more!! She’s just figured out how to harness that sensitivity."

"And I think Megan’s sensitivity is what drives her to fight for others. I think it’s what drove her to take a knee. The Megan you’re seeing now? It’s the stronger version of the one who knelt in the first place. All the threats, all the criticism, all the fallout — coming out on the other side of that is what makes her seem so unfazed by the assholes of the world now."

"I think in trying to help others, Megan has cemented who she is."

You can show your support for the US women's world team with this shirt, available here.