Republicans Are Using John McCain in Campaign Ads to Attack Democrats, and the McCain Family Is Not Happy 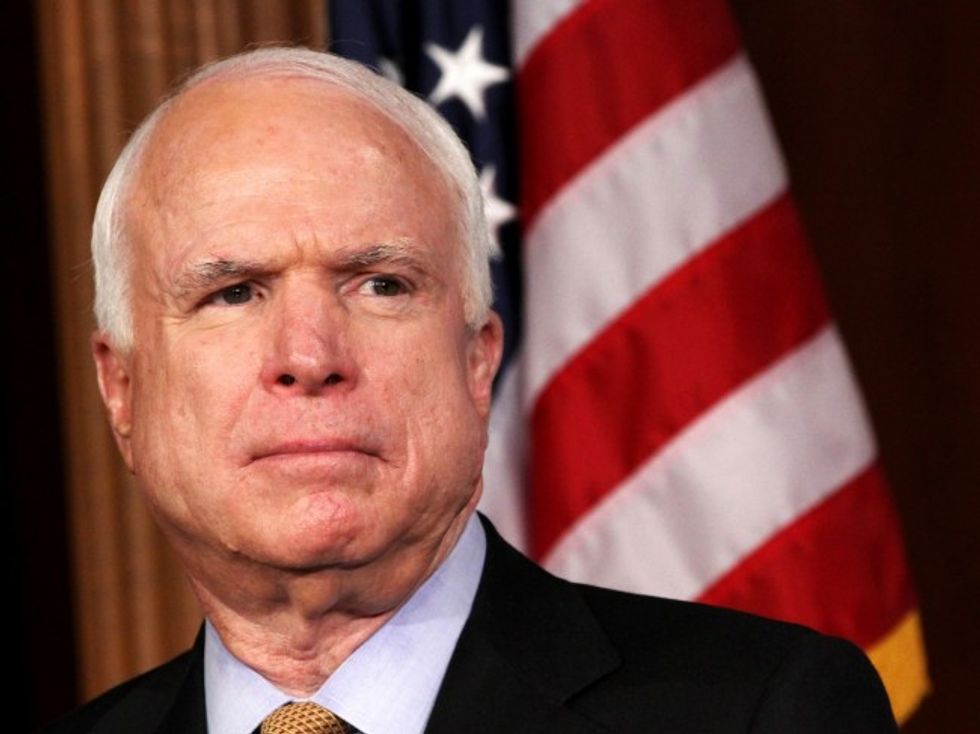 The family of the late Senator John McCain (R-AZ) said it was “disappointed” that McCain's image was being used in Republican attack ads paid for by the National Republican Congressional Committee.

“The family is disappointed that John’s image is being weaponized this election cycle so soon after his passing, and they had hoped there would be a more appropriate amount of time for people to think about his final message before they began to politicize him,” Rick Davis, a friend of the McCain family and a former top adviser to the senator, told Politico.

Speaking about Slotkin, McCain says “either doesn’t know the truth, or are you not telling the truth.”

The ads also contradict the farewell message McCain, who died on August 25 after a long battle with glioblastoma, released through his aides.

“We weaken our greatness when we confuse our patriotism with tribal rivalries that have sown resentment and hatred and violence in all the corners of the globe,” McCain wrote in his farewell note. “We weaken it when we hide behind walls, rather than tear them down, when we doubt the power of our ideals, rather than trust them to be the great force for change they have always been.”

“We are three-hundred-and-twenty-five million opinionated, vociferous individuals," McCain added. "We argue and compete and sometimes even vilify each other in our raucous public debates. But we have always had so much more in common with each other than in disagreement.”

Many agreed with McCain's family that the ads are inappropriate:

Sad, pathetic attacks like these are working about as well as the desperate Schuette campaign ads. There’s a reas… https://t.co/fulLIDyg7t
— Graham Davis (@Graham Davis) 1536850692.0

Could someone please tell me when simple civility died in America. And yes I know Donald plays a big role but he is… https://t.co/rDlEHaaUnB
— Leisure Time (@Leisure Time) 1536866090.0

In a piece published last week in USA Today, the late senator's wife, Cindy, offered how best to memorialize her husband:

This was the essence of John McCain’s message to our nation: that we must join together, shaped by our deepest values of liberty, equal justice and respect for the dignity of all people, hardened by unwavering courage and integrity, and step into the arena to fight for a greater cause.

John did this every day. Whether it was to demand the best possible leadership and support for our armed forces, or to empower freedom fighters against dictators around the world, or to demand that perpetrators of torture and human rights abuses be punished, or to make sure our native American communities are treated with dignity and respect. John McCain fought for others every day of his life, whether he was wearing a uniform or standing on the floor of the U.S. Senate.

Cindy McCain emphasized that Americans should join her "in the arena" to "Fight for a greater cause."

John’s memory inspires me to be in the arena every day. Thank you for all the kind messages about my husband. I am grateful. Since his passing, thousands of people have asked how they can do something to honor Sen. McCain. I’ll tell you how: Join me in the arena. Fight for a greater cause.

Ann Kirkpatrick, the target of one of the ads, was one of many who praised McCain after his death. She also signaled that the ads are inappropriate.

"For them to use footage of Sen. McCain for political purposes without permission while his family and all of Arizona are still grieving is classless and shameful," Kirkpatrick said in a statement. "I can't imagine why Lea Marquez Peterson or her allies want to run their campaign this way."