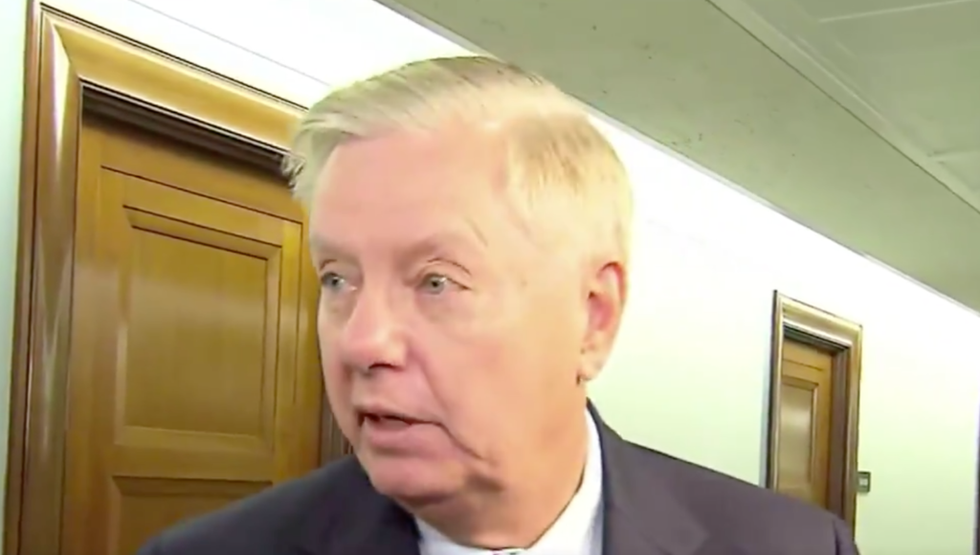 One of President Donald Trump's most devout supporters, Senator Lindsey Graham (R-SC), attempted to defend Trump after Ambassador to the European Union Gordon Sondland amended his testimony to the committees overseeing Trump's impeachment.

Graham's latest defense in light of Sondland's testimony is that the Trump administration is incapable of forming a quid pro quo due to a bumbling policy in regards to Ukraine.

“What I can tell you about the Trump policy toward the Ukraine — it was incoherent. It depends on who you talked to. They seemed to be incapable of forming a quid pro quo."

As far as the "incoherent" part, he's got a point.

Lt. Col. William Taylor, the acting Ambassador to Ukraine whose full testimony was released today, said in his opening statement to the impeachment inquiry committees that there were two contradictory diplomatic channels in talks with Ukraine:

"There appeared to be two channels of U.S. policy-making and implementation, one regular and one highly irregular. As the Chief of Mission, I had authority over the regular, formal diplomatic processes...At the same time, however, there was an irregular, informal channel of U.S. policy-making with respect to Ukraine, one which included then-Special Envoy Kurt Volker, Ambassador Sondland, Secretary of Energy Rick Perry, and as I subsequently learned, [Donald Trump's Personal Lawyer Rudy] Giuliani."

However, according to Taylor, the quid pro quo put forth by the shadow negotiations was the source of the incoherence. Taylor was disturbed to find that the United States was withholding military aid to Ukraine to force an investigation that would benefit the President's political prospects:

"I became increasingly concerned that our relationship with Ukraine was being fundamentally undermined by an irregular, informal channel of U.S. policy-making and by the withholding of vital security assistance for domestic political reasons."

While the Trump orbit's ineptitude has been cited as an excuse from wrongdoing before, it doesn't seem to work for Graham in this case, especially since the quid pro quo and the unauthorized diplomatic channel were the sources of the incoherence he cites.

@thehill As I recall this was also one of the defenses against Russian collusion: The Trump folks are too disorgani… https://t.co/KeN688it2w
— Penthor-Mul (@Penthor-Mul) 1573063866.0

Wow. It seems @LindseyGrahamSC is going with the "@realDonaldTrump and his people are too stupid and incompetent to… https://t.co/UFycn0EJvd
— Andrew Feinberg (@Andrew Feinberg) 1573063305.0

The growing revelations brought by the impeachment inquiry have forced Graham to constantly move the goalposts in order to defend Trump. Near the start of the inquiry, Graham said:

"If you could show me that, you know, Trump actually was engaging in a quid pro quo, outside the phone call, that would be very disturbing."

After multiple officials testified that there was an apparent quid pro quo, Graham dismissed the entire process, saying he'd refuse to read any of the transcripts, even though he'll be voting on whether or not to remove the President if and when the House impeaches Trump.

“I'm not going to read these transcripts. The whole process is a joke"

@stevenportnoy @maggieNYT @LindseyGrahamSC Why does anyone bother putting a microphone to his mouth? Nonsense every time.
— Terie Engelbrecht (@Terie Engelbrecht) 1573061960.0

Graham and a wealth of other Republican lawmakers continue to defend Trump and discredit the impeachment inquiry—or they just evade reporters' questions.