Rush Limbaugh Just Claimed That Obama Removed the Citizenship Question From the Census, and the Fact Checking Came Quick 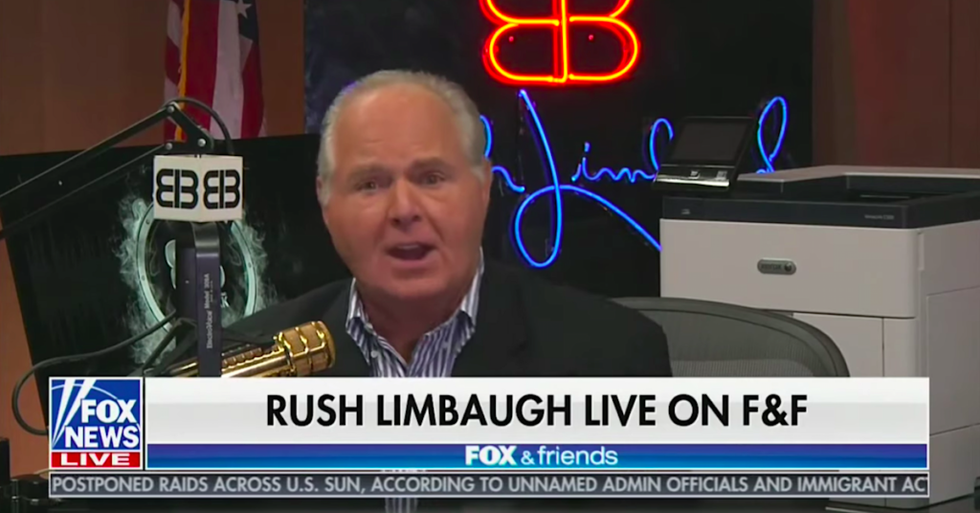 In a rare appearance on mainstream media, right-wing conspiracy theorist Rush Limbaugh spoke with the hosts of Fox and Friends Friday morning. The three weekday hosts of Fox's morning program deferred to Limbaugh as an expert on the citizenship question, history of the census and the Democratic party for almost 10 minutes.

"But this idea of who is a citizen and who isn’t, why did that question get taken off? That’s where everybody’s focus should have been, and I’ll put this on the Republicans."

When asked by Ainsley Earhardt to elaborate on his claims, Limbaugh said:

"Obama takes the question off, the Republicans do what? Say nothing."

"Then the Democrats get back, and—‘We want to put it back on, President Trump, it is common sense. Put it back on’—the Democrats fight, propose, oppose, make it hell on Earth to try to get this done."

"This is a great illustration of the difference in the two parties and how they operate politically. I think it is outrageous that the desire to know who here is a citizen is controversial."

You can watch Limbaugh's comments in the first few moments of this video, after which Limbaugh goes further with a conspiracy theory unsupported by facts.

President Trump took to Twitter shortly after with praise for Limbaugh's appearance on the Fox News program.

However shortly after his segment on the program, even conservative media outlet The Daily Caller—founded by Fox News' Tucker Carlson—called Limbaugh a liar. They even debunked his lies in an online article published Friday morning.

Citing The Washington Post, Fortune magazine and The Associated Press, The Daily Caller confirmed the last time the actual census had a citizenship question was in 1950. As for Limbaugh's claims about President Barack Obama and the 2010 census, public records prove the 2010 census questions were finalized before the election in 2008 while President George W. Bush was still in office.

The same agency that performs the census every 10 years has done reports on citizenship levels outside of the normal census process since 1950, but never as part of the official census questionnaire since then. So what changed between 1950 and 1960 to make them drop the question?

By the 1960 census, no group was legally denied the right to be a citizen in the United States based solely on their race or ethnicity and the question was dropped from that year's census.

The facts and history of the citizenship question and the census vary wildly from the claims Limbaugh made on Fox and Friends. But what is Limbaugh's actual level of education and knowledge in the areas he speaks about?

Unlike some of his fellow conservative pundits, Limbaugh is a former radio DJ who latched onto the shock jock talk radio movement in the 1980s after spending several decades on the radio. While far-right commentators like Laura Ingraham and Ann Coulter are Ivy League educated lawyers with advanced studies in history, politics and government, Limbaugh has no formal education to back up his rhetoric.

Limbaugh began working in radio as a teenager. He spent two semesters and one summer at Southeast Missouri State University—where "he failed everything" according to his mother—before dropping out and going back to being a DJ on a local radio station.

For insight into the money that funds people like Limbaugh, Alex Jones, Jacob Wohl, Tomi Lahren and Charlie Kirk to push misinformation on the masses, Jane Mayer wrote Dark Money: The Hidden History of the Billionaires Behind the Rise of the Radical Right, available here.

"Why is America living in an age of profound and widening economic inequality? Why have even modest attempts to address climate change been defeated again and again? Why do hedge-fund billionaires pay a far lower tax rate than middle-class workers? In a riveting and indelible feat of reporting, Jane Mayer illuminates the history of an elite cadre of plutocrats—headed by the Kochs, the Scaifes, the Olins, and the Bradleys—who have bankrolled a systematic plan to fundamentally alter the American political system."

"How do groups like the Libertarian party seem to be so well funded despite the lack of any significant electoral success? How do think tanks like the Cato Institute become so well funded and have such an out spoken voice? This book sheds light on that as well as how it all got started. The book begins in Virginia with the movement to keep school segregated and the transition of the movement from the blatant race based politics to the argument for Betsy DeVos style "school choice" in its place to create the same result."