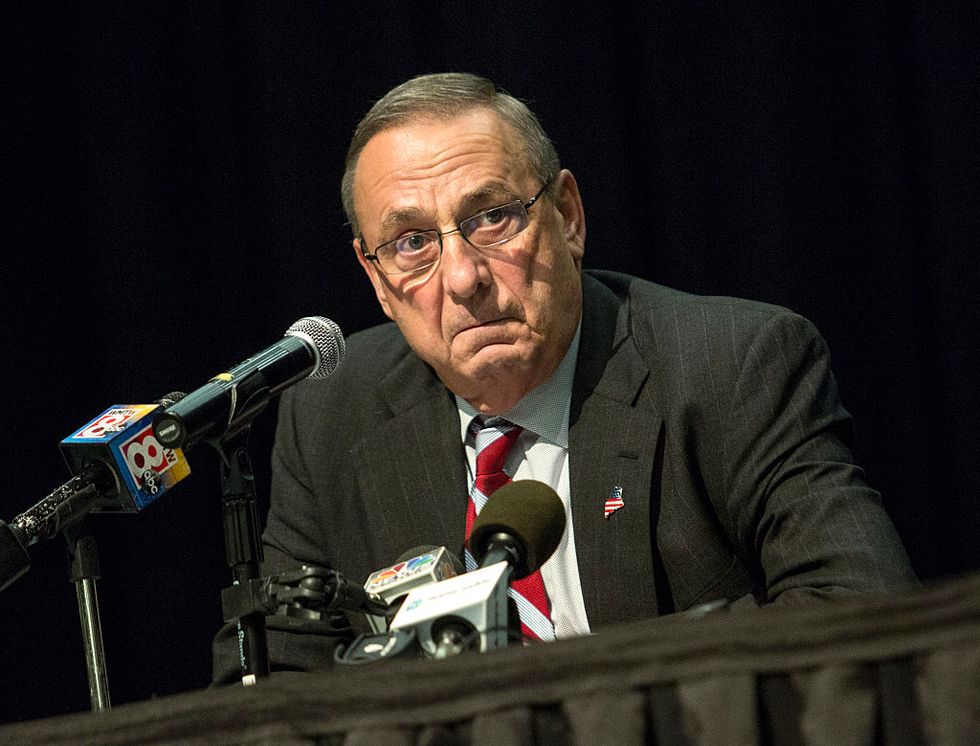 During his tenure as the Governor of Maine, Tea Party Republican Paul LePage made national news several times for his casually racist comments—he once referred to "people of color or people of Hispanic origin" as "the enemy right now." And he has slowed down none since leaving office.

Now living in Florida, LePage frequently calls in or guests on conservative radio and TV programs like the Ingraham Angle.

While speaking on WVOM's morning radio show this week, LePage made the case against a new bill before the Maine legislature. Maine plans to join several states in having the popular vote determine the President instead of the electoral college.

LePage's argument against this?

The electoral college is a tool of White supremacy used to make sure White people determine presidential elections and must be maintained so minorities do not get to pick Presidents.

"Actually what would happen if they do what they say they’re gonna do is White people will not have anything to say. It’s only going to be the minorities that would elect. It would be California, Texas, Florida."

He added the popular vote is an "insane process" and warned Whites "we’re gonna be forgotten people" unless the electoral vote is maintained.

It's funny. Usually when I say the electoral college is antidemocratic, a bunch of folks swoop into my mentions to… https://t.co/368UmTtc0S
— Angus Johnston (@Angus Johnston) 1551367369.0

the delta between Trumper and Stormfront keeps getting smaller https://t.co/TDWwnpKpYJ via @TPM
— Josh Marshall (@Josh Marshall) 1551367911.0

So the electoral college is a racist institution and LePage just admitted it. https://t.co/X9pppM1JX2
— Danny Phantom (@Danny Phantom) 1551366906.0

While his honesty about his view of the role of the electoral vote versus popular vote was refreshing for some...

...people still found it shocking for a politician to be so blatant in his desire to maintain a state of White supremacy and dominance in the election process.

And Mehdi Hasan called out the lack of response to such blatant statements, especially from a "so-called liberal media."

But some did call out both LePage and those who enabled him in office and continue to enable him.

We have known for a LONG time that @Governor_LePage is an absolute racist. And the @GOP and @GOPChairwoman Ronna Mc… https://t.co/wkoG3vBJbA
— rolandsmartin (@rolandsmartin) 1551362893.0

Others thanked LePage for making it clear why a system developed to enable rich White male land—and slave—owners to control elections in the late 18th century might be obsolete in the 21st.

This bluntly racist defense of the Electoral College gives us one more reminder of why it's got to go. https://t.co/WqEm0s2hYZ
— Pete Buttigieg (@Pete Buttigieg) 1551395281.0

Just in case you weren't clear about the connections between the Electoral College and white supremacy https://t.co/w3ZMGmgbjs
— Erik Loomis (@Erik Loomis) 1551362378.0

This bill before the Maine legislature will not be the first time Maineiacs took steps to address problems in the election process. The former Governor was so reviled by his own state that Maineiac voters signed petitions to put adoption of ranked choice voting on the ballot as a people's referendum then passed the change in Maine election law.

When LePage and a then Republican led legislature tried to delay implementation of ranked choice voting, Maineiacs gathered signatures again and passed a people's veto to begin ranked choice voting with the 2018 primaries and November's federal elections.

The impetus was to keep people's last choice on a multiple candidate ballot from winning. LePage won with less than 40% of the popular vote in both 2010 and 2014 on just such a ballot.

The former Governor recently made headlines again after it was revealed he and members of his staff spent $22,000 of Maine taxpayer money for room reservations and other expenses at Trump International Hotel in Washington, D.C. over a two year period. The Portland Press Herald first flagged the trips in 2017, but no one could get the official Maine Comptroller records.

The revelation came after a Freedom of Access Act request LePage sat on while in office was finally honored after Democratic Governor Janet Mills took over in January. LePage's defense of the expenses was to call them fiction, then to state he was unaware, then to claim it was media bias because he is a Republican.