Laura Ingraham Just Tried to Explain Away Donald Trump's Child Separation Policy in Three Words, and It Did Not Go Well 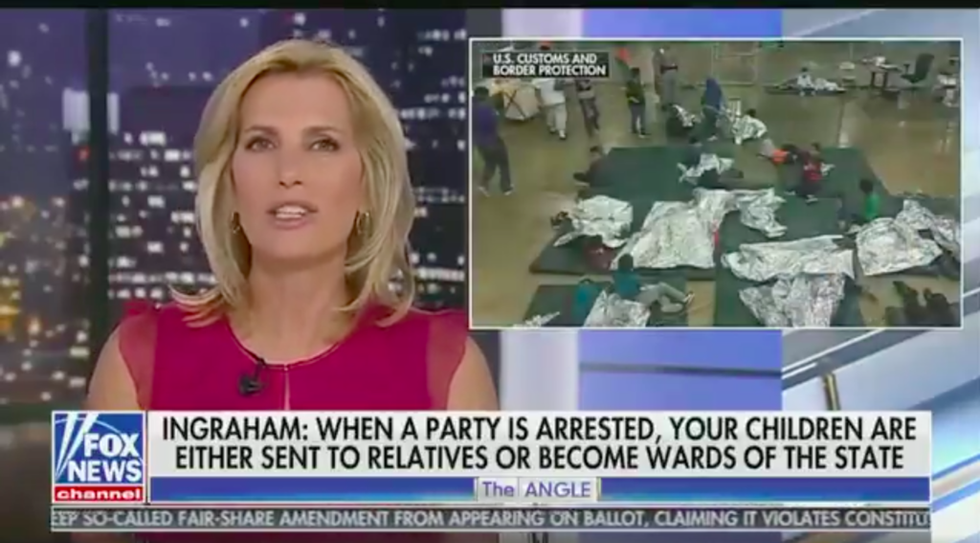 “As more illegal immigrants are rushing the border, more kids are being separated from their parents,” Ingraham said. “And temporarily housed at what are, essentially, summer camps.”

To underscore her point, Ingraham cited a news report from The San Diego Union-Tribune that compared the camps to "boarding schools."

Laura Ingraham describes the detention facilities where children are sent after being forcibly separated from their… https://t.co/ONqpdr0VGw
— Judd Legum (@Judd Legum) 1529374568.0

The truth, however, is rather dire. Ingraham's comments come amid significant backlash to the Trump administration's family separations policy and right on the heels of the release of an audio clip obtained by ProPublica which reveals children sobbing for their parents. At one point, a Border Patrol agent jokes, "We have an orchestra here."

Earlier in the day, Ingraham tweeted criticisms directed at "the do-gooders who complain about separating minors from migrant criminals."

Why don't the do-gooders who complain about separating minors from migrant criminals volunteer to sponsor one of t… https://t.co/yTSg0Z6MVb
— Laura Ingraham (@Laura Ingraham) 1529334279.0

She also cited a Department of Homeland Security statistic which claims that there's been a "300% increase in family-based immigration fraud in the last fiscal year" due to migrants seeking asylum in the United States.

Naturally, Ingraham's statements, which blatantly fly in the face of well-documented facts, subjected her to a slew of online criticism.

Ingraham's comments mirror a much larger trend of obfuscation from President Donald Trump and his administration.

The president has shown no signs of letting up his campaign blaming Democrats for the policy.

In a tweet yesterday, he implored Democrats to “start thinking about the people devastated by Crime coming from illegal immigration.”

But the president's tweets are misleading.

he “zero tolerance” policy, which the president has admitted is a negotiating tool to get Democrats to cave to his demands (which include tougher border security as well as a wall erected along the nation’s southern border), was, in fact, announced by Attorney General Jeff Sessions last month, and the Department of Homeland Security announced last week that around 2,000 children have been separated from their families during the six weeks since the policy went into effect.

The rest of the administration does not seem to be able to get its story straight on the family separation policy.

In a tweet Sunday night, Homeland Security Secretary Kirstjen Nielsen claimed that the administration “does not have a policy of separating families at the border.”

“It was a simple decision by the administration to have a zero tolerance policy for illegal entry,” he told The New York Times. “Period.”

Presidential counselor Kellyanne Conway also defended the policy during an appearance on NBC’s “Meet the Press.” Conway insisted that “nobody” in the administration likes to enforce the zero-tolerance policy.

“Nobody likes seeing babies ripped from their mothers’ arms,” she said. “As a mother, as a Catholic, as somebody who has got a conscience… I will tell you that nobody likes this policy.”

Ingraham's remarks are not dissimilar to statements made by Mark Krikorian, the executive director for the Center for Immigration Studies, who, during an appearance on Fox and Friends, said that the camps are "a big step up" for most migrants.

"Nobody's detained from leaving. They can just leave. Sometimes they do," Krikorian said.