Concertgoers described a scene of utter chaos which has now eclipsed the Pulse nightclub shooting as the deadliest massacre on American soil. 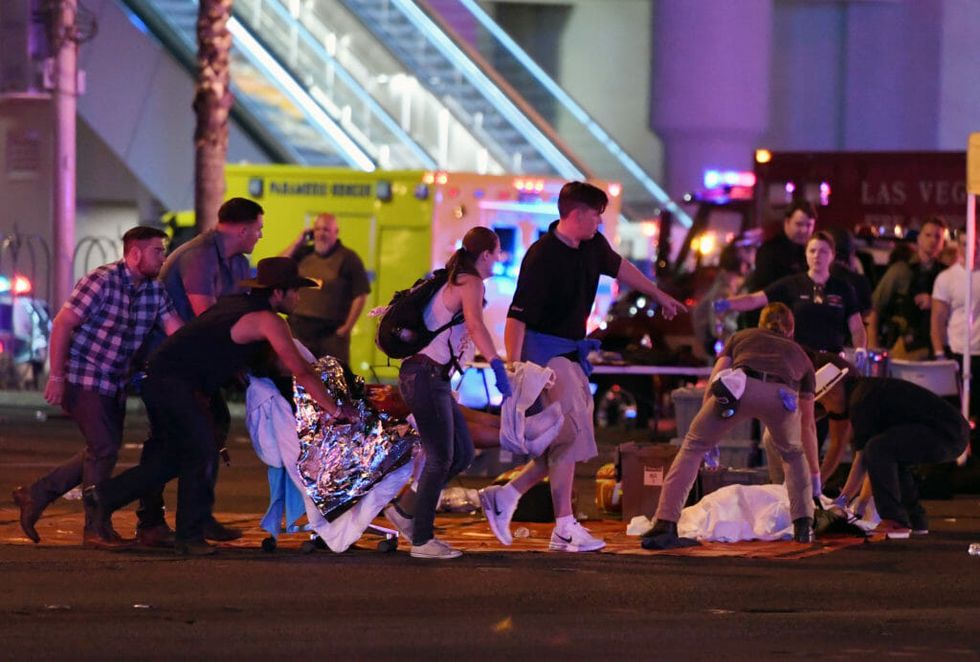 LAS VEGAS, NV - OCTOBER 02: An injured person is tended to in the intersection of Tropicana Ave. and Las Vegas Boulevard after a mass shooting at a country music festival nearby on October 2, 2017 in Las Vegas, Nevada. A gunman has opened fire on a music festival in Las Vegas, killing over 20 people. Police have confirmed that one suspect has been shot dead. The investigation is ongoing. (Photo by Ethan Miller/Getty Images)

More than 50 people were killed and, reports now estimate, more than 400 others were injured in the deadliest mass shooting in modern American history when a lone gunman opened fire on country music festival attendees from the 32nd floor of the Mandalay Bay Resort and Casino.

Authorities identified the shooter as Stephen Paddock, 64, from Mesquite, Nevada. Authorities fatally shot Paddock as they apprehended him in his room. Paddock had a small cache of weapons––10 rifles––in his possession. Investigators have located Paddock’s roommate, Marilou Danley, 62, for questioning, Sheriff Joseph Lombardo said. He added that officers had located a Hyundai Tucson and a Chrysler Pacifica Touring, both with Nevada plates, which were registered to Paddock.

The massacre began around 10:08 pm yesterday as Paddock fired upon the crowd at the Route 91 Harvest Festival located across the street from the hotel. The shots rang out as country music star Jason Aldean performed on stage. Videos posted on social media showed large crowds ducking for cover.

Audio of the shooting suggested that Paddock used a military-style weapon. Concert performer Jake Owen, who was standing about 50 feet from Aldean when the first shots rang out, said as much when asked about the shooting. "It got faster and faster, almost like it was an automatic rifle," Owen said. "At that point, everyone on stage started running everywhere."

Rachel De Kerf filmed her escape her using her cell phone. She played the video she took for authorities, during which more than five minutes of gunfire were intermittently audible, according to CNN. "The gunshots lasted for 10-15 minutes. It didn't stop," she said. "We just ran for our lives."

A concertgoer described a scene of utter chaos to CNN affiliate KLAS:

Everybody's hiding everywhere, they're hiding under the bleachers and the stanchions, anywhere they could and everyone is telling us to 'run, run as fast as you can.'

And my husband and I ran out toward our car, and there were people hiding underneath my car for cover and there was a gentleman who was shot and he said, 'Can you help me?' And so I put him in my car and I had like six people in my car, people without shoes, running, just to get away.

The Mandalay Bay Resort and Casino tweeted its condolences following the tragedy.

Facebook has set up a crisis response page to help people determine whether their loved ones are safe.

The attack on the Las Vegas Strip now holds the morbid record for being the deadliest mass shooting on American soil since the mass shooting at Orlando’s Pulse nightclub last summer, which left 49 dead and 53 injured.