Donald Trump's Homeland Security Chief Just Went on 'Fox and Friends' to Deflect Blame for the Death of a Migrant Child While In Custody, and People Are Pissed 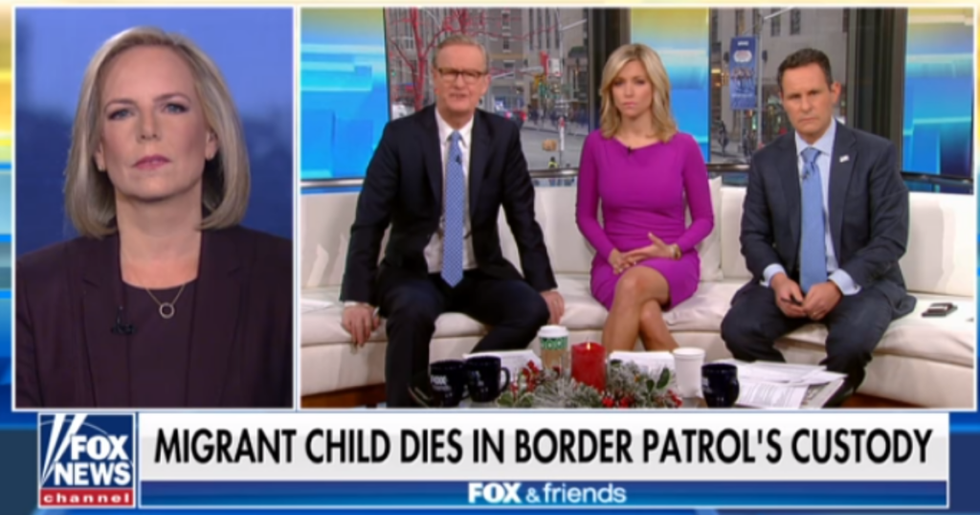 Homeland Security Secretary Kirstjen Nielsen ignited a firestorm Friday morning when she blamed the death of a child in United States custody on the victim's parents.

A 7-year-old Guatemalan girl died of dehydration and exhaustion while under the care of Border Patrol, The Washington Post reported on Thursday.

"According to CBP records, the girl and her father were taken into custody about 10 p.m. Dec. 6 south of Lordsburg, N.M. as part of a group of 163 people who approached U.S. agents to turn themselves in."

"More than eight hours later, the child began having seizures at 6:25 a.m., CBP records show. Emergency responders, who arrived soon after, measured her body temperature at 105.7 degrees, and according to a statement from CBP, she 'reportedly had not eaten or consumed water for several days.'"

Appearing on Fox & Friends, presumably while President Donald Trump watched with adoration during his executive time, Nielsen said the girl's parents are responsible for their daughter's death.

“This is just a very sad example of the dangers of this journey. This family chose to cross illegally,” Nielsen said. “What happened was they were about 90 miles away from where we could process them. They came in such a large crowd that it took our border patrol folks a couple times to get them all. We gave immediate care, we’ll continue to look into the situation, but again, I cannot stress enough how dangerous this journey is when migrants choose to come here illegally.”

The girl passed away in El Paso, Texas. Border Patrol officials said the girl “was revived" after arriving at Providence Children’s Hospital but "did not recover and died at the hospital less than 24 hours after being transported."

Twitter erupted with calls for those in charge to be held accountable.

@atrupar @SecNielsen @SecNielsen should be arrested and charged, as well as those who directly oversaw that child. This is an abomination.
— Mike Miller (@Mike Miller) 1544798858.0

@atrupar @SecNielsen She didn’t die on the journey. Republicans seem to have a major problem with taking responsibi… https://t.co/sCJfi5Ul8f
— Bonnie Cleaveland (@Bonnie Cleaveland) 1544796986.0

@atrupar @SecNielsen Secretary Nielsen she died in your care on your watch. You’re the DHS Secretary. The buck stop… https://t.co/wNbjqiikoY
— Alan (@Alan) 1544795585.0

This death, no doubt evoking images of the inhumane family separation policy still illegally enforced by this administration, is a shameful legacy.

@PhilippeReines History won’t be kind. We won’t forget and we will hold DJT, his administration and many gop responsible. Nielsen included.
— Queen Bee (@Queen Bee) 1544797924.0

There is a humanitarian crisis unfolding at our southern border. What side are we on?