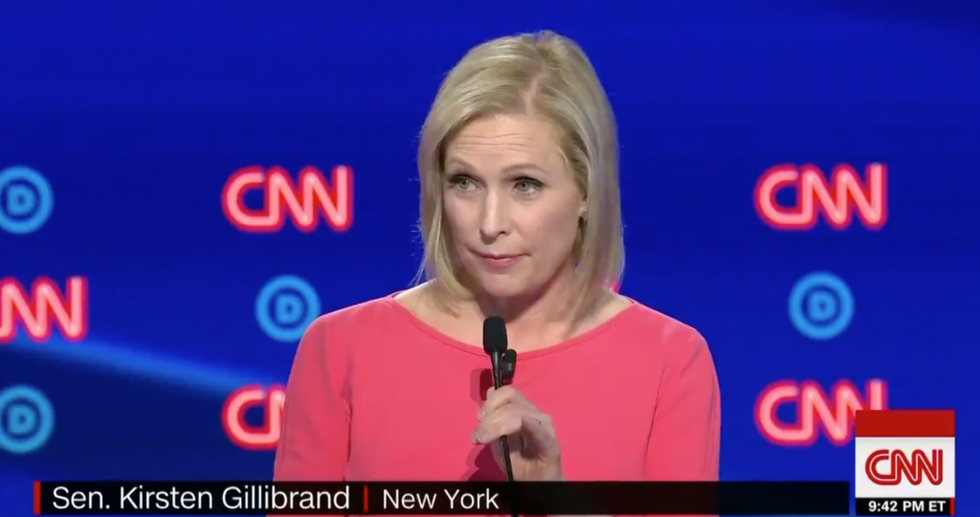 Senator Kirsten Gillibrand (D-NY) may not be leading the pack in the crowded field of Democratic candidates for the 2020 presidential election, but that didn't stop her from delivering a savage burn to President Donald Trump during her second debate.

CNN's Dana Bash asked Gillibrand to elaborate on her climate change positions. Gillibrand vowed that the second thing she'd do is "reengage on global climate change" and reenter the Paris Climate Accords.

The first thing she'd do?

"The first thing that I'm gonna do when I'm president is I'm gonna Clorox the Oval Office."

Gillibrand says the first thing she would do as President is "Clorox" the Oval Office #DemDebate… https://t.co/qE8SRLHGyP
— CNN Politics (@CNN Politics) 1564624977.0

The audience erupted in laughter before Gillibrand got down to business to lay out her plan to combat climate change.

With so many disgusted by Donald Trump's behavior, the internet praised Gillibrand for her masterful shade.

Others chimed in with their suggestions about how to purge the White House.

The Democratic debates have unleashed a bevy of one-liners as well as a wide variety of policy proposals.

Let's just hope one of them gets the chance to Clorox the Oval Office.