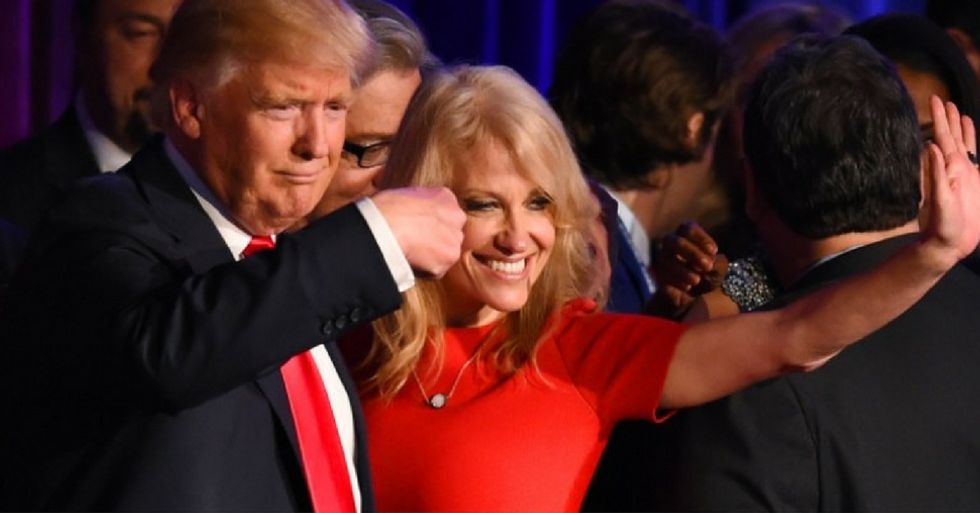 President-elect Donald Trump has appointed Kellyanne Conway, his former campaign manager, as "counselor to the president," his transition team announced yesterday. In a statement, the transition team said that Conway, the first female campaign manager to win a presidential race, "will continue her role as a close adviser to the President and will work with senior leadership to effectively message and execute the Administration's legislative priorities and actions."

Trump praised Conway in a statement at the time of the announcement, calling her "a trusted adviser and strategist who played a crucial role in my victory" and specifically lauded her for her "amazing insights on how to effectively communicate our message."

In a statement of her own, Conway said she was "humbled and honored to play a role in helping transform the movement he has led into a real agenda of actions and results."

A transition source told CNN that Conway's role would be similar to Karen Hughes' during George W. Bush's administration, placing her in charge of many of the major communication duties in the White House. Hughes had first worked with Bush as director of his campaign for the office of governor of Texas, and then as counselor for the first year of his administration. She left the White House in 2002 to return to Texas but maintained daily contact with the Bush administration. She returned to the administration in 2004, becoming a key figure in the planning of the 2004 Republican National Convention as well as the latter half of the 2004 presidential election.

Conway became an instrumental force during Trump's presidential campaign after Trump promoted her, then a senior adviser and pollster, following the departure of Paul Manafort in a major staff shakeup less than three months before Election Day. The news of the staffing change came after several weeks of negative press coverage for Trump, and polls at the time indicated that he trailed behind Hillary Clinton, his Democratic competitor, in almost every key battleground state.

At the time of the staffing change, Conway denied it would diminish the role of Manafort, who, until then, had served Trump’s campaign chairman and chief strategist. “I look at it as an expansion of the team. Paul remains as Chairman,” Conway said at the time.

However, a source close to the campaign revealed that Trump’s “exasperation” with his campaign’s management had widened the rift between him and Manafort. Trump, who during the campaign came under increasing scrutiny for his oddly sympathetic views toward Putin’s policies toward Ukraine, viewed Manafort as a liability amid revelations that Manafort, who worked in Ukraine as an international consultant, allegedly pocketed $12.7 million in cash payments from Ukraine’s former ruling party between 2007 and 2012. The report, initially published in the New York Times, asserts that the money could be part of an illegal, off-the-books system. Sources close to Trump’s campaign said a shakeup was imminent.

Conway had expressed interest in serving the administration in some capacity, and elaborated at a function hosted by Politico in December. "In terms of going into the West Wing, I will do whatever the President-elect and the vice president-elect ... believe is my best and highest use for them," she said at the time.

Conway, who has four children, did not immediately accept a position early on in the transition because she feared it would tax her familial obligations. “I would say that I don’t play golf and I don’t have a mistress so, I have a lot of time that a lot of these other men don’t,” Conway told Fox Business Network. “I see people on the weekend spending an awful lot of time on their golf games and that’s their right, but the kids will be with me, we live in the same house, and they come first.”