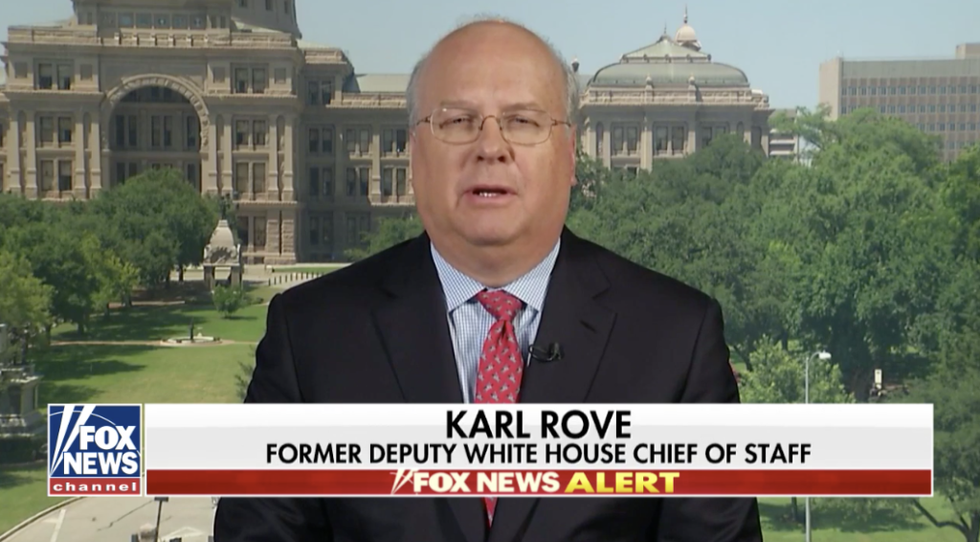 During an appearance on Fox News on Monday, veteran Republican operative Karl Rove shredded President Donald Trump's claim that the United States has a trade deficit with Canada. But as Rove pointed out, the president isn't telling the truth.

Rove noted that American exports to Canada are valued at $320.16 billion dollars, while imports from our northern neighbor total $307.6 billion. That leaves a trade surplus of $12.56 billion. The president, however, claimed something else entirely.

The Office of the U.S. Trade Representative says the U.S. has a trade surplus with Canada. It reports that in 2016, the U.S. exported $12.5 billion more in goods and services than it imported from Canada, leading to a trade surplus, not a deficit.

Last week, Trump imposed tariffs on Canada, claiming that the United States has a $100 billion trade deficit with our northern neighbor.

Canadian Prime Minister Justin Trudeau tried to explain the U.S.-Canada trade relationship to Trump, who refused to accept what he was being told, frustrating his fellow G7 leaders.

"Look, here’s the essence of our trading relationship. We sell you a lot of oil and energy and you sell us a lot of food and manufactured goods. It is a trillion dollar relationship. We could pick any one of those things and argue over the numbers. But shouldn’t we be talking about the relationship as a whole, which is an unmitigated positive for both of us?"

Trump then whined that the United States would no longer be a "piggy bank" that the rest of the world is "robbing."

Derek Holt, vice-president of Scotiabank Economics, said that Trump's assessment of the trade relationship between the U.S. and Canda is devoid of "reason, diplomacy or facts."

"A trio [Trump and top advisers Peter Navarro and Larry Kudlow] of fast-talking gunslingers in the U.S. administration defamed Canada's institutions, leadership, values and policies over the weekend," said Holt, in a note on Monday. "The vulgarity of the remarks is worth a recap before turning to the factual errors that are behind their beliefs."

Holt added that Trump's citing of a 270 percent tariff on dairy was "disingenuous to be polite about it."

"That's right, Trump is quoting a figure that applies to milk that accounts for a tiny fraction of Canada's $33 billion of goods imported from the United States each month," Holt said. "Better judgment would question whether an entire trading relationship needs to be jeopardized in order to appeal to dairy farmers in Wisconsin."

Why should I, as President of the United States, allow countries to continue to make Massive Trade Surpluses, as th… https://t.co/Tj3a7diEmk
— Donald J. Trump (@Donald J. Trump) 1528679837.0

Another economist noted that dairy exports from the United States make up a "small portion" of our trade with Canada and that Trump is blowing it out of proportion.

"Dairy is a small portion of overall trade between the two countries. Supply management is being trumped up as having more economic implications than it actually does," Royce Mendes, senior economist at CIBC World Markets, told CBC. "While they might provide friction between trading partners, import quotas among most developed nations are not on a scale that should cause a breakdown of the global trading system."

Twitter's reaction to Rove was priceless.

One user noted that Trump losing Rove, who has been a reliable conservative foot soldier, means we've "reached some VERY dark times."

"The world is upside down," wrote another.

@ktumulty @KarlRove Latest sign that the the Apocalypse is nigh: when I find myself nodding in agreement with Karl Rove on Fox.
— Mo Juiced (@Mo Juiced) 1528733788.0