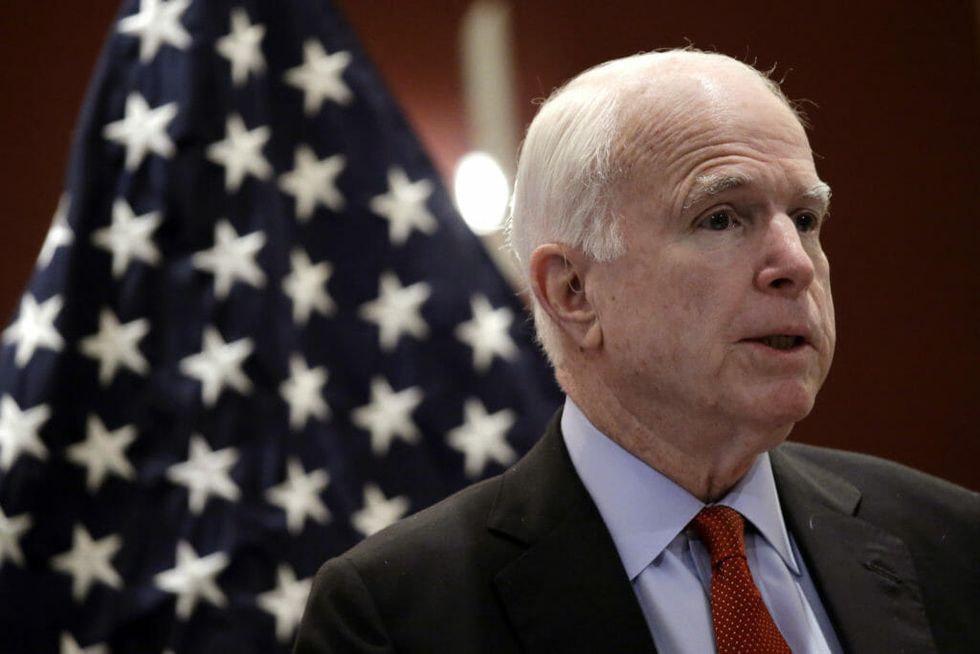 Lawmakers from both sides of the aisle put aside months of partisan gridlock to send their good wishes to Senator John McCain (R-AZ) and his family after he announced that doctors had diagnosed him with glioblastoma, an aggressive form of brain cancer.

President Donald Trump––whose often adversarial relationship with McCain became a Washington staple after he slammed the veteran senator for having been "captured" in Vietnam––tweeted a message from the official @POTUS Twitter account.

Melania and I send our thoughts and prayers to Senator McCain, Cindy, and their entire family. https://t.co/SO4XYgnyug
— President Trump (@President Trump) 1500514647.0

Former President Barack Obama, who ran against McCain in the 2008 presidential election, called him “an American hero & one off the bravest fighters I’ve ever known.”

John McCain is an American hero & one of the bravest fighters I've ever known. Cancer doesn't know what it's up against. Give it hell, John.
— Barack Obama (@Barack Obama) 1500511742.0

John McCain is one tough fighter - we know he'll face this diagnosis with courage and strength. Our family... https://t.co/XXTUltNGey
— Sarah Palin (@Sarah Palin) 1500511922.0

John McCain is as tough as they come. Thinking of John, Cindy, their wonderful children, & their whole family tonight.
— Hillary Clinton (@Hillary Clinton) 1500511739.0

Former Congresswoman Gabrielle Giffords (D-AZ) was among a slew of Arizonans, including Senator Jeff Flake (R) and Representative Andy Biggs (R), to rally behind McCain.

“I have been amazed by his energy and vigor for serving his country over the years, and the sacrifices he made for this nation are unmatched,” Representative Biggs said. “I hope to see him back on Capitol Hill soon, and I know that he will fight this diagnosis with every ounce of strength he has within him.”

Glioblastoma is a highly lethal malignancy and the most common of all malignant brain tumors. It's the same illness that killed Senator Edward "Ted" Kennedy (D-MA) and  Beau Biden, the son of former vice president Joe Biden. Glioblastomas are, according to the American Brain Tumor Association, tumors that "arise from astrocytes—the star-shaped cells that make up the 'glue-like,' or supportive tissue of the brain." These tumors tend to be highly malignant "because the cells reproduce quickly and they are supported by a large network of blood vessels."

A patient can experience seizures, headaches, blurred vision and confusion depending on the location of the tumor.

“If it affects the portion of the brain that controls your strength, you could have weakness on one half of the body, speech problems, sometimes double vision, the inability to understand or express yourself, even cognitive problems or understanding what you’re listening to, or the lack of insight,” said Deepa Subramaniam, director of the brain tumor center at Georgetown University’s Lombardi Comprehensive Cancer Center.

Speech problems are also tied to glioblastoma. An example that may have been a precursor to the diagnosis was during former FBI Director James Comey's testimony before the Senate Intelligence Committee. McCain's tangled and distracted questioning attracted widespread attention.

In a statement released yesterday on behalf of McCain and his family, the Mayo Clinic said that doctors had removed a blood clot from above McCain's left eye on Friday.

"Subsequent tissue pathology revealed that a primary brain tumor known as a glioblastoma was associated with the blood clot," the Mayo Clinic said in the statement, adding that "scanning done since the procedure (a minimally invasive craniotomy with an eyebrow incision) shows that the tissue of concern was completely resected by imaging criteria."

The senator and his family are reviewing further treatment options, including oral chemotherapy and radiation. The median survival time following treatment is about 12 to 16 months.