He certainly has a way with words. 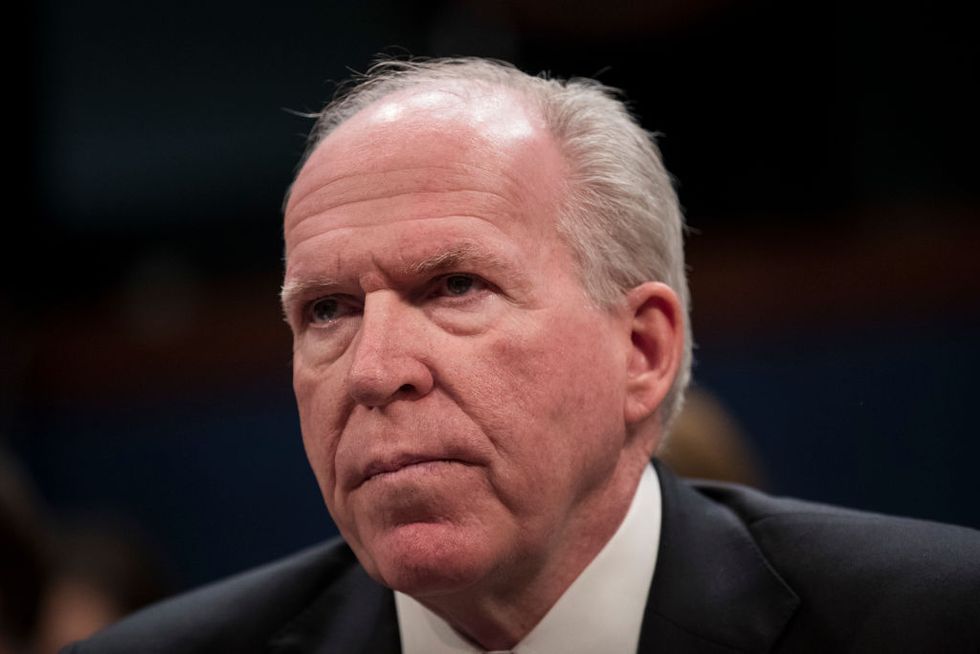 WASHINGTON, DC - MAY 23: Former Director of the U.S. Central Intelligence Agency (CIA) John Brennan testifies before the House Permanent Select Committee on Intelligence on Capitol Hill, May 23, 2017 in Washington, DC. Brennan is discussing the extent of Russia's meddling in the 2016 U.S. presidential election and possible ties to the campaign of President Donald Trump. (Photo by Drew Angerer/Getty Images)

John Brennan, the former director of the CIA under President Obama, railed into President Donald Trump earlier today, pushing back against the president's attacks on former FBI director James Comey, whose book, A Higher Loyalty: Truth, Lies, and Leadership, paints an unflattering picture of Trump and his administration.

"As the greatest Nation history has known, we have the opportunity to emerge from this nightmare stronger & more committed to ensuring a better life for all Americans, including those you have so tragically deceived,” Brennan tweeted at Trump.

Your kakistocracy is collapsing after its lamentable journey. As the greatest Nation history has known, we have th… https://t.co/QtviPJRNLi
— John O. Brennan (@John O. Brennan) 1523630374.0

Kakistocracy is defined as "a system of government which is run by the worst, least qualified, or most unscrupulous citizens."

Brennan's tweet was in response to Trump's own Twitter rant this morning in which the president slammed Comey, calling him a “weak and untruthful slime ball” and a “proven LEAKER & LIAR” in posts to his Twitter followers.

Trump launched his attacks after Comey, in an exclusive interview with ABC News’ chief anchor George Stephanopoulos, says the president asked him to investigate the allegations described in the controversial dossier to “prove that it didn’t happen.” The president added it would be “terrible” if his wife Melania Trump believed any of the allegations.

The dossier, compiled by former British intelligence agent Christopher Steele, includes a graphic account of Trump’s sexual encounter with prostitutes during a 2013 trip to Moscow. The dossier raises the possibility that the encounter––including moments when Trump and the women engaged in water sports––could have been caught on video.

Comey recalls Trump asking him about the dossier during a private dinner on Jan. 27, 2017. Trump brought up the dossier and said, “He may want me to investigate it to prove that it didn’t happen. And then he says something that distracted me because he said, you know, ‘If there’s even a 1 percent chance my wife thinks that’s true, that’s terrible.’”

“I may order you to investigate that,” Trump then told Comey.

Comey advised caution: “I said, ‘Sir, that’s up to you. But you’d want to be careful about that, because it might create a narrative that we’re investigating you personally, and second, it’s very difficult to prove something didn’t happen.”

The possible existence of the notorious “pee tape” consumed Trump, Comey says. In fact, Trump appeared less concerned about Russian interference in the 2016 presidential election than he did about how that information could undermine his electoral win:

President-elect Trump’s first question was to confirm that it had no impact on the election … and then the conversation, to my surprise, moved into a PR conversation about how the Trump team would position this, and what they could say about this, with us still sitting there. And the reason that was so striking to me [is] that’s just not done. That the intelligence community does intelligence, the White House does PR and spin.

Accompanying the president’s response was silence on the steps the United States could take to prevent the Russians from executing similar operations in the future.

“It was all, ‘What can we say about what they did and how it affects the election that we just had,’” Comey said, adding that he requested that he and the president speak alone to discuss the allegations described in the dossier:

I’m about to meet with a person who doesn’t know me, who’s just been elected president of the United States, [and] by all accounts, and from my watching him during the campaign, could be volatile. And I’m about to talk to him about allegations that he was involved with prostitutes in Moscow and that the Russians taped it and have leverage over him.

The conversation he and Trump had was “really weird.” Comey describes something an “almost out-of-body experience.”

“I was floating above myself, looking down, saying, ‘you’re sitting here, briefing the incoming president of the United States about prostitutes in Moscow,’” Comey said.

Comey says that he did not at the time reveal that the dossier was compiled through opposition research financed by his opponents, saying his only goal was merely to alert Trump that the information existed:

I started to tell him about the allegation was that he had been involved with prostitutes in a hotel in Moscow in 2013 during the visit for the Miss Universe pageant and that the Russians had filmed the episode, and he interrupted very defensively and started talking about it, you know, ‘Do I look like a guy who needs hookers?’ And I assumed he was asking that rhetorically, I didn’t answer that, and I just moved on and explained, ‘Sir, I’m not saying that we credit this, I’m not saying we believe it. We just thought it very important that you know.’

Brennan has criticized the Trump administration before on several high profile ocassions. Just last month, for example, he took Trump to task for his "venality, moral turpitude, and political corruption."

"America will triumph over you," he wrote.

When the full extent of your venality, moral turpitude, and political corruption becomes known, you will take your… https://t.co/xbl1pcESbL
— John O. Brennan (@John O. Brennan) 1521288048.0