Jeff Sessions Just Explained Why Trump's Child Separation Policy Is Not Like Nazi Germany, and He Really Doesn't Get It

If you have to explain this... 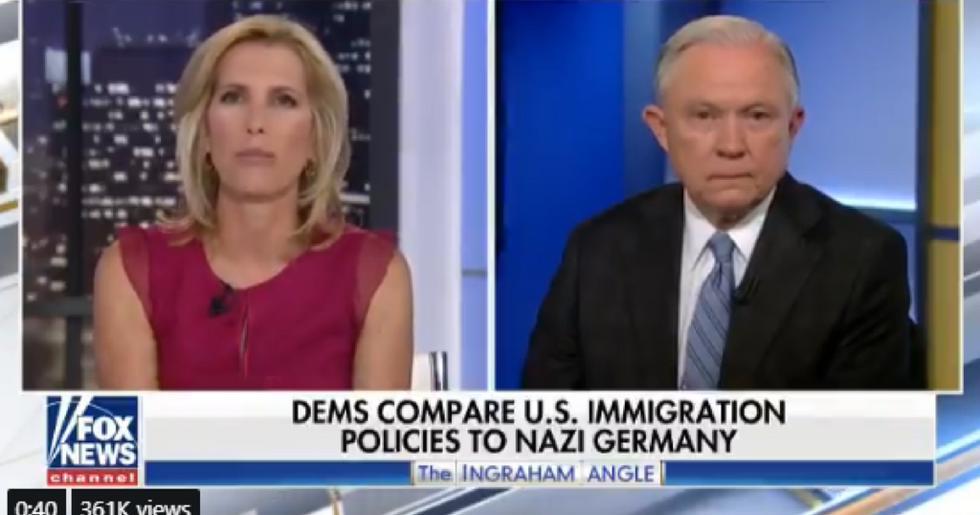 Attorney General Jeff Sessions went on Fox News Monday night to defend the Trump administration's "zero tolerance" border policy, which has resulted in nearly 12,000 migrant children being placed in detention centers, a policy that some have compared to Nazi concentration camps.

Sessions explained to Laura Ingraham that these claims are "exaggerations," because "in Nazi Germany, they were keeping the Jews from leaving the country."

You can watch the video below:

In Nazi Germany, Jews were initially deported and relocated into ghettos before the Third Reich decided to enact the Final Solution, which resulted in six million Jews getting murdered in German concentration camps.

@kylegriffin1 So the people being held can reunite with their families and leave? Sessions unloads another crock. I call BS!
— Shirley U (@Shirley U) 1529409758.0

Sessions here seems to be implying that the two situations are totally different because his ultimate goal with these migrants is to send them out of the United States, back to where they came from. And that's his defense.

In some cases, migrant parents were told their children were being taken to bath or shower (sound familiar?) and were never reunited with their kids.

Children are being kept in large cages, many of which are lit 24/7, rendering sleep impossible. Many kids are sleeping on mats on the floor, and are only allowed outside for 1-2 hours per day.

Parents and children have described the conditions in the detention centers as "freezing cold" and lacking "good food."

On Monday, Wikipedia added the detention centers to its list of concentration camps, citing the crowded conditions and abuse children are facing from being separated from their families.

In May of 2018, under the direction of Attorney General Jeff Sessions, the U.S. acted in accordance with a 2016 Ninth U.S. Circuit Court of Appeals decision which ruled that child migrants who came to the border with parents and were held in custody must be released. However, the decision did not state parents must be released and thus the children are held in custody until they can be placed with extended family members. US officials began forcibly separating children and parents arriving at the US border. This included some seeking asylum from violence in their home countries, however, since up to 11,000 children are brought in to the U.S. each year by child sex traffickers, the identities are verified before release to extended family custody. Under this policy, nearly 2000 children were taken from their parents and placed in “detention centers.” These centers, have been described by those in opposition to the policy as “concentration camps." The centers had previously been cited by Texas officials for more than 150 health violations.

"This is a serious matter," Sessions continued. "We need to think it through, be rational and thoughtful about it. We want to allow asylum for people who qualify for it. But people who want economic migration for their personal financial benefit and what they think is their family's benefit is not a claim for asylum."

Earlier this month, Sessions announced that domestic and gang violence would no longer be considered as grounds for asylum. “The prototypical refugee flees her home country because the government has persecuted her,” Sessions wrote in his ruling.

“An alien may suffer threats and violence in a foreign country for any number of reasons relating to her social, economic, family or other personal circumstances,” he added. “Yet the asylum statute does not provide redress for all misfortune.”

Generally, claims by aliens pertaining to domestic violence or gang violence perpetrated by nongovernmental actors will not qualify for asylum.

Americans of both political parties have condemned the "zero tolerance" policy. The president has been blaming Democrats for refusing to change the “law,” however there is no law requiring the splitting up of immigrants and their children.

It was his administration that began separating children from their parents last month when Attorney General Jeff Sessions announced that children of parents attempting to enter into the United States across our border with Mexico would be separated from their parents.