Jeff Sessions Was Just Caught on Camera Joking About Trump's Child Separation Policy, and He Got Laughter and Applause 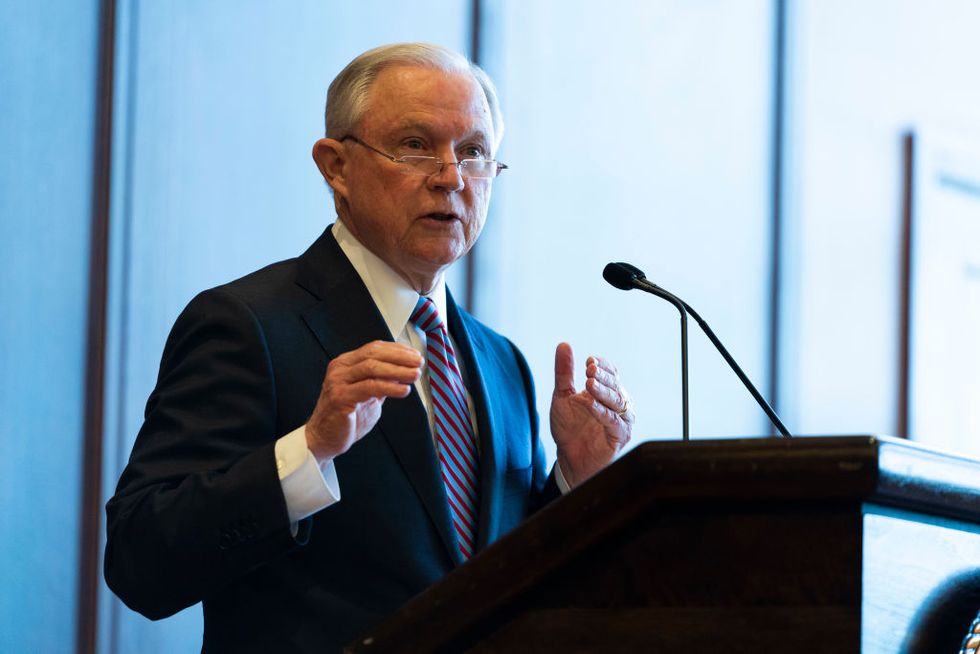 Attorney General Jeff Sessions joked about family separations at the U.S.-Mexico border as a result of the "zero tolerance" policy he authorized last month. Despite widespread criticism of the policy, Sessions attacked the "elite" and members of a "lunatic fringe" he claims want to compromise national security.

“The rhetoric we hear from the other side on this issue – as on many others – has become radicalized,” Sessions told the Criminal Justice Legal Foundation. “We hear views on television today that are on the lunatic fringe, frankly. And what is perhaps more galling is the hypocrisy.

He continued: "These same people live in gated communities, many of them, and are featured at events where you have to have an ID to even come in and hear them speak. They like a little security around themselves."

He closed his remarks with the following: “And if you try to scale the fence, believe me, they’d be even too happy to have you arrested and separated from your children."

Sessions appeared to bask in the attention, using it as an opportunity to call out the Trump administration's naysayers and pledge that the administration would continue to deliver on President Donald Trump's campaign promises.

You want to know what indecency and incivility sound like? People laughing and applauding at the “joke” about forci… https://t.co/lqWrboHeUW
— Chelsea Clinton (@Chelsea Clinton) 1530049191.0

Others, including Zerlina Maxwell, the Senior Director of Progressive Programming for SiriusXM, also weighed in:

Jeff Sessions just made a joke about baby jails in case you wanted to know how that civility debate is going.
— Zerlina Maxwell (@Zerlina Maxwell) 1530046496.0

Sessions' speech was greeted by protesters. About 25 people demonstrating against the Trump administration's immigration policy were arrested after they allegedly blocked traffic; Los Angeles Police Officer Christopher Im called it an act of "civil disobedience."

Clergy of various denominations took part in the demonstration, chanting, "Not in cages, kids belong in homes!"

The shirt I got arrested in today has the whole Sermon on the Mount on the back. So when they take away our Bibles… https://t.co/v4UC02uXfM
— Shane Claiborne (@Shane Claiborne) 1530064119.0

The president’s daughter, Ivanka, later thanked him profusely on Twitter, a move which opened her up to a volley of criticism from many who pointed out that she was congratulating her father for “taking critical action” on a policy he could have halted with a simple phone call, not to mention the fact that it was a crisis entirely of his own making.

Chuck Holton, a reporter for NRA-TV, the cable television platform for the gun rights lobbying groups, claimed that child detention centers are “too nice” during a segment about child immigration at the U.S.-Mexico border.

The policy of separating children from their families “was essentially the same” as under former President Barack Obama, Holton said, adding: “I’ve visited those facilities. Those facilities, if anything, are too nice.”

It is unclear how Holton gained access since access to these facilities has been extremely limited. Nevertheless, he insisted that migrant children are being kept in “very safe, secure environment with hot showers, probably for the first time in their lives, with three hot meals a day, with games to play and education and health screenings.”

“As more illegal immigrants are rushing the border, more kids are being separated from their parents,” Ingraham said. “And temporarily housed at what are, essentially, summer camps.”

To underscore her point, Ingraham cited a news report from The San Diego Union-Tribune that compared the camps to “boarding schools.”