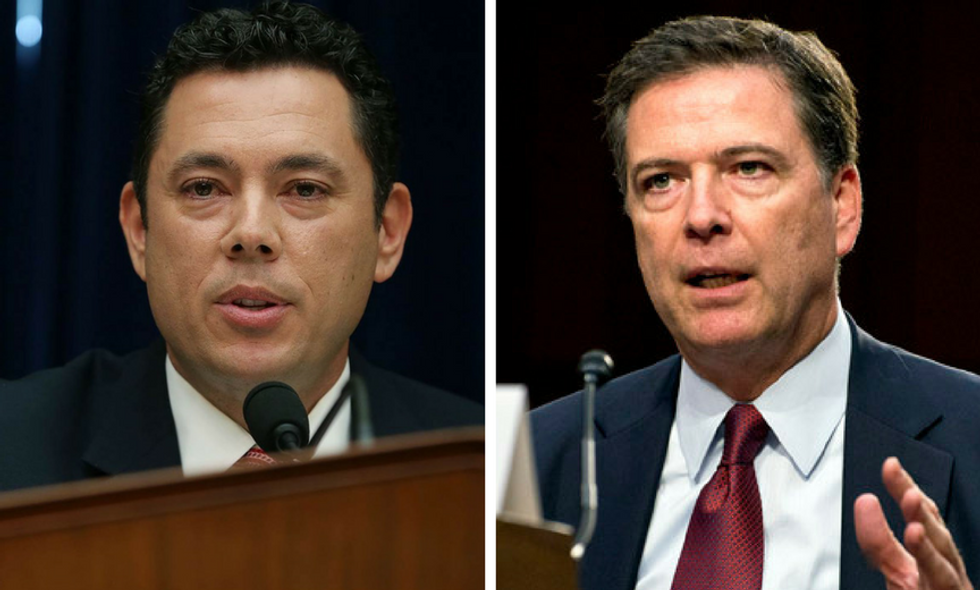 In a whirlwind week for news on the Trump Russia investigation front, Tuesday afternoon The New York Times reported that James Comey had written memos, commonly known as memcons, documenting certain communications with President Trump. In one such memcon, dated February 14th, 2017, the day after Michael Flynn resigned as national security advisor, Comey reportedly wrote that Trump had asked him to drop the Flynn investigation.

According to senior FBI officials who have read the memo, President Trump allegedly told Comey "I hope you can see your way clear to letting this go, to letting Flynn go. He is a good guy, I hope you can let this go."

Just hours after the news broke, Rep. Jason Chaffetz (R-Utah), who is Chairman of the House Oversight Committee, wrote a letter to the FBI (pdf) demanding copies of this memo, and any others that document conversations between the President and Director Comey.

In the letter, Chaffetz wrote:

"According to the report, 'Mr. Comey created similar memos--including some that are classified--about every phone call and meeting he had with the president.' If true, these memoranda raise questions as to whether the President attempted to influence or impede the FBI's investigation as it relates to Lt. Gen. Flynn. So the Committee can consider that question, and others, provide, no later than May 24, 2017, all memoranda, notes, summaries, and recordings referring or relating to any communications between Comey and the President."

On Twitter, Chaffetz raised the prospect of using his committee's subpoena power if the memos were not forthcoming.

.@GOPoversight is going to get the Comey memo, if it exists. I need to see it sooner rather than later. I have my subpoena pen ready.
— Jason Chaffetz (@Jason Chaffetz) 1494975525.0

Democrats on the House Oversight and Judiciary Committees wrote their own letter to Chaffetz and Rep. Bob Goodlatte, who is Chairman of the Judiciary Committee in the House, calling for an immediate joint investigation into whether President Trump, Attorney General Sessions and top White House aides "are engaged in an ongoing conspiracy to obstruct the criminal, counter-intelligence, and oversight investigations currently being conducted by the Federal Bureau of Investigation, the Department of Justice, and Congress."

For its part, the White House denies such a conversation with Comey ever took place, saying in a statement: