Ivanka Trump Just Explained Why Her Use of Private E-Mail Was No Big Deal, and, Well, That Sure Sounds Familiar 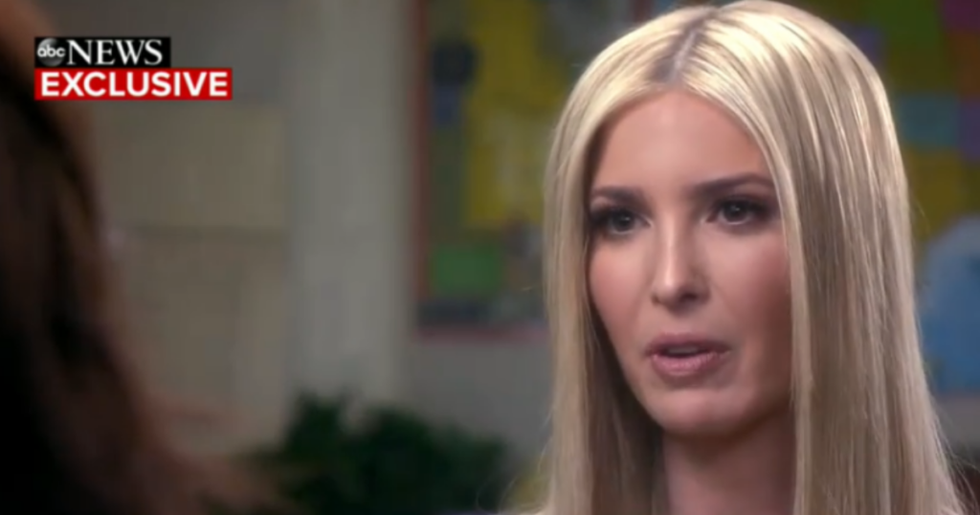 Ivanka Trump on Tuesday defended her use of private email during while working at the White House in 2017, offering nearly identical excuses to those made by President Donald Trump.

Shortly before Thanksgiving, The Washington Post reported that Ms. Trump had used a personal email to conduct government business throughout much of 2017. Her father quickly brushed off any parallels to Hillary Clinton.

In nearly identical wording, Ms. Trump told ABC's Deborah Roberts all of her emails were properly stored and that comparisons to Clinton's use of personal email are unfair because Ms. Trump did not traffic classified information.

"All of my emails are stored and preserved," said the First Daughter. "There were no deletions. There is no attempt to hide. There's no equivalency to what my father's spoken about."

Roberts reminded Ms. Trump that her father "hammered" Clinton over her emails during the 2016 campaign. Chants of "lock her up" have continued to this day.

"How is it wrong for her and not you?" asked Roberts.

"Well, there was classified information," said Ms. Trump. "She had a server set up with the intent to keep those emails outside of a system that had been organized for them."

This is not true. Clinton did not use a personal email with the intent to deceive anyone. Politifact wrote in 2016:

"It’s important to remember that only 'a very small number' of her emails - two -were marked classified when they were first sent, and just 110 out of the 30,000 she turned over were classified but unmarked. Evidence seems to indicate that Clinton generally dealt with classified information in an appropriate manner."

Ms. Trump added that all of her emails remained "on the White House server" and that there was "no intent to circumvent." Ms. Trump also alluded to Clinton's alleged "mass deletions after a subpoena was issued" (again, a Clinton employee deleted personal emails, and did not intend to thwart a subpoena).

Though untrue, the president on Thanksgiving made this same point.

"There was no deletion of emails like the 33,000 plus," Trump said. He then claimed without evidence that "probably another hundred thousand, that Hillary Clinton did after she got a subpoena.”

Ms. Trump insisted there was "nothing of substance" and that her emails "have not been deleted."

People want to know what's in Ms. Trump's emails, in the name of fairness.

@ABC That's not the part of the issue people find concerning. She used an unsecure server. That nothing bad might h… https://t.co/ZyI4LZzvMC
— Rochelle Dolim (@Rochelle Dolim) 1543403611.0

Others found ABC's way of lighting Ms. Trump to be... strange.

The president maintained a staunch defense of his "very innocent" daughter last week.

“There was no bleach pit," Trump said. "There was no anything, just innocent emails. There were no classified emails, a much different deal. It’s another fake news story. And she did transition out. She's a private person and then ultimately she transitioned out from private to government.”

Ms. Trump, the president said, "can handle herself. These are all in the historical records." According to Trump, his daughter's use of personal email was “unlike Hillary Clinton” and is "all fake news.”