Four agents waited as the ten-year-old had surgery. 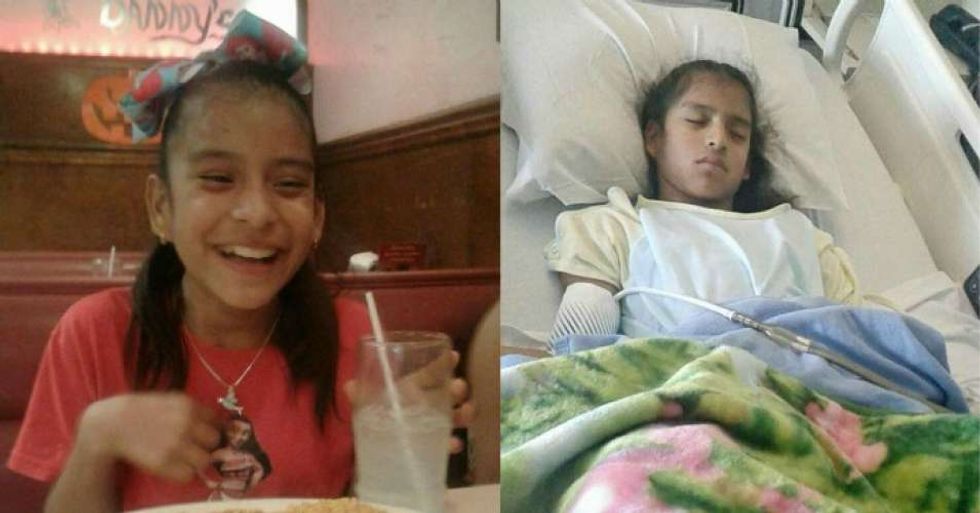 U.S. Customs and Border Protection intercepted a 10-year-old girl with cerebral palsy after she passed through a Border Patrol checkpoint on her way to a hospital to undergo emergency gallbladder surgery. Rosa Maria Hernandez––who has the mental capacity of a child half her age––was brought to the United States illegally from Mexico in 2007 when she was 3 months old so she could receive better medical care, her mother, Felipa de la Cruz, told reporters.

Hernandez was traveling in an ambulance, accompanied by her cousin, who is a U.S. citizen, to Driscoll Children's Hospital in Corpus Christi, Texas, on Tuesday when federal immigration officers stopped the vehicle at a checkpoint. Agents allowed her to continue to the hospital, but followed the ambulance the rest of the way there, then waited outside her room until she was released. Agents insisted the door to her hospital room be left open at all times to keep an eye on her, according to Leticia Gonzalez, the family's attorney.

Although doctors recommended Hernandez be released to "a family member who is familiar with her medical and psychological needs," agents transferred the girl to a shelter run by the Office of Refugee Resettlement as is customary with undocumented, unaccompanied minors. Aside from a short video chat, Felipa de la Cruz has not seen her daughter and does not know if she'll ever be able to return to her home in Laredo, Texas.

"I told her she was only there because she was recovering and when she was recovered that she could come with me," she said yesterday. "I start to think about her, and I want to start crying, and I become desperate."

The ACLU weighed in.

This is Trump's deportation force in action. Rosa Maria needs to recover from surgery with her family. Instead,… https://t.co/bVsKAxRGJT
— ACLU (@ACLU) 1509030923.0

As did Senator Dianne Feinstein (D-CA)...

...as did David Axelrod, a senior political commentator for CNN...

This is absolutely appalling. Deporting a 10-year-old with cerebral palsy? Seizing her in the hospital? https://t.co/XBkuEcBhzz
— David Axelrod (@David Axelrod) 1509108077.0

...and Scott Dworkin, the founder of the Democratic Coalition Against Trump, who has continued to sound the alarm about the president's immigration proposals.

Customs and Border Protection defended their agents in a statement:

Due to the juvenile's medical condition, border patrol agents escorted her and her cousin to a Corpus Christi hospital where she could receive appropriate medical care. Per the immigration laws of the United States, once medically cleared she will be processed accordingly. The Mexican Consulate has been advised of the situation by Laredo Sector Border Patrol.

Dan Hetlage, a spokesman for Customs and Border Protection, insisted agents are trying to uphold immigration law. "The agent is wrong if he lets her go. We don't have the discretion. It's not a traffic ticket. We follow the letter of the law," he said. "It's frustrating for us. I'm a human being. The agents are trying to do their job as humanely as possible."