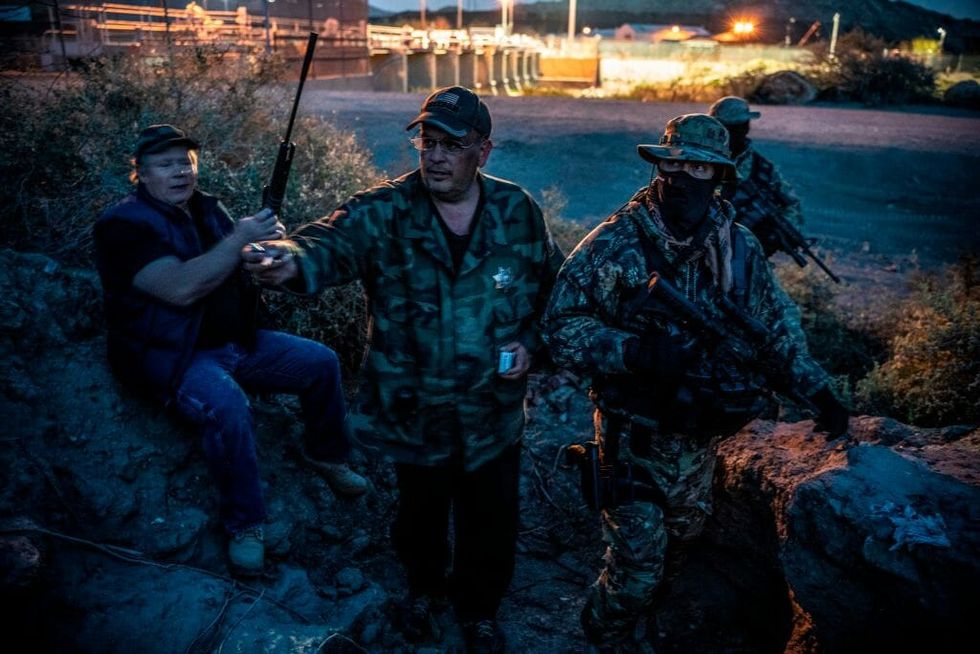 A member of a civilian border militia that calls themselves the United Constitutional Patriots said 'We have to go back to Hitler days" and place migrants crossing the U.S.-Mexico border in a "gas chamber" according to an April 24 police report containing allegations by Steven Brant, a former member of the group.

“Why are we just apprehending them and not lining them up and shooting them,” Armando Gonzalez, a member of the militia, allegedly said. “We have to go back to Hitler days and put them all in a gas chamber."

Brant contacted the Sunland Park Police Department and reported "terroristic threats" made by the group. He says he went by the codename “Viper" and that Gonzalez handed him "a handgun and ran to his vehicle and grabbed an AR-15" after observing several people crossing the border. He then gave Brant back his gun and told him to put his weapons away. It was then when Gonzalez became upset and made the "Hitler" and "gas chamber" comments.

The police report was obtained by The Young Turks following a public records request from reporter Ken Klippenstein.

Member of border militia that detained 200 migrants at gunpoint told police another member had said, “Why are we...… https://t.co/zCJhhb9qiE
— Ken Klippenstein (@Ken Klippenstein) 1557182138.0

According to the police report, the United Constitutional Patriots member who said "Why are we...not lining them up… https://t.co/x21ESHDBaS
— Ken Klippenstein (@Ken Klippenstein) 1557197177.0

The news here is largely perceived as a consequence of President Donald Trump's incendiary rhetoric against migrants, which has been magnified by his calls for the construction of a border wall at our nation's southern border.

@kenklippenstein @GaleScheelar Almighty God - what is happening in this age of @realDonaldTrump . This is disgusti… https://t.co/gz8KmbLXtM
— Anne Ruttan (@Anne Ruttan) 1557185739.0

The United Constitutional Patriots' latest appearance in the news comes just three weeks after the American Civil Liberties Union of New Mexico condemned them for kidnapping asylum seekers at gunpoint.

“We cannot allow racist and armed vigilantes to kidnap and detain people seeking asylum," the ACLU said at the time.

The Southern Poverty Law Center notes that UCP faces "an uncertain future" after its leader, Larry Hopkins, was arrested on criminal charges "related to [his] firearm possession." UCP's accounts have also been suspended by PayPal, GoFundMe and Cash App.