Former CEO of Starbucks Just Joined Twitter to Announce He May Run for President as an Independent, and Now He's Getting Seriously Ratioed 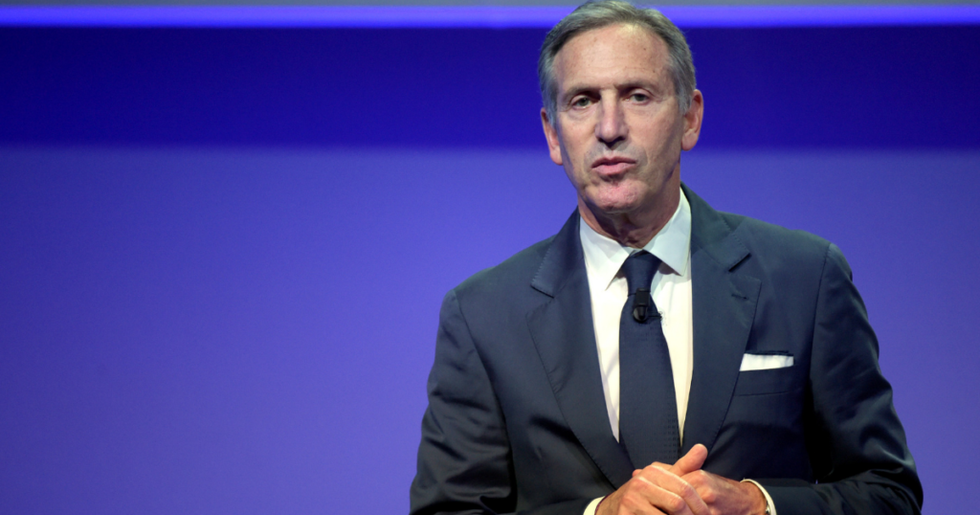 MILAN, ITALY - MAY 07: Howard Schultz, Executive Chairman of Starbucks speaks during Seeds&Chips Summit on May 7, 2018 in Milan, Italy.The summit, which runs from May 7 until May 10, focuses on food innovation and discusses the urgent challenges faced by the food and farming industry (Photo by Pier Marco Tacca/Getty Images)

Former Starbucks CEO Howard Schultz announced on Sunday that he is considering a run for president in 2020 as a "centrist independent," stoking concerns he could fracture the liberal vote and hand reelection to President Donald Trump.

Schultz, 65, left Starbucks in 2018, sparking rumors that he was considering a White House bid.

"It feels good to be here," Schultz wrote on Twitter. "My hope is to share my truth, listen to yours, build trust, and focus on things that can make us better."

It feels good to be here. My hope is to share my truth, listen to yours, build trust, and focus on things that can make us better.
— Howard Schultz (@Howard Schultz) 1548623728.0

"I love our country," the Seattle billionaire later added, "and I am seriously considering running for president as a centrist independent."

I love our country, and I am seriously considering running for president as a centrist independent.
— Howard Schultz (@Howard Schultz) 1548633856.0

In an interview on CBS' 60 Minutes which aired Sunday night, Schultz made the case for his candidacy.

"I am seriously thinking of running for president," Schultz told correspondent Scott Pelley. "I will run as a centrist independent, outside of the two-party system. We're living at a most fragile time, not only the fact that this president is not qualified to be the president, but the fact that both parties are consistently not doing what's necessary on behalf of the American people and are engaged, every single day, in revenge politics."

Schultz is not getting the responses he anticipated.

Schultz, a Democrat, blames both parties for embracing "extremes" and for compounding the country's mounting debt.

"I look at both parties. We see extremes on both sides. Well, we are sitting today with approximately $21.5 trillion of debt, which is a reckless example, not only of Republicans, but of Democrats, as well, as a reckless failure of their constitutional responsibility."

Liberals on social media fear Schultz could siphon votes away from the Democratic nominee, which would all but ensure a Trump victory.

Schultz scoffed at the idea that voting for him would give Trump an advantage.

"I want to see the American people win. I want to see America win. I don't care if you're a Democrat, independent, libertarian, Republican. Bring me your ideas. And I will be an independent person who will embrace those ideas. Because I am not, in any way, in bed with a party."

He offered thoughts on Donald Trump as well.

He added that he believes Trump is unqualified to be president.

Schultz voiced his opposition to Trump's proposed border wall. He also said he would prefer a tax code that benefits the majority of Americans instead of the ultra-rich like himself, and disagreed with Trump's decision to pull the United States out of the Paris Climate Accord.

Asked what qualifies him to be president, Shultz pointed to his ability to lead.

"I have a long history of recognizing I'm not the smartest person in the room, that in order to make good decisions about complex problems I have to recruit and attract people who are smarter than me, who are more experienced, more skilled, and we've got to create an understanding that we need a creative debate in the room to make these kinds of decisions."

Some on Twitter suggested to Shultz that he use his money and influence to advance progressive causes.

@HowardSchultz If you're looking for ways to "make us better," might I humbly suggest that you start here in Seattl… https://t.co/ABjEYfC7Dh
— Emily Pothast (@Emily Pothast) 1548630975.0

@HowardSchultz Take the money you would spend running for president and give your employees a raise. It will do far… https://t.co/S4AsHCrHh4
— Samuel Black (@Samuel Black) 1548684193.0

On Monday morning, Trump all but dared Schultz to run against him.

"Howard Schultz doesn’t have the “guts” to run for President! Watched him on @60Minutes last night and I agree with him that he is not the “smartest person,” Trump tweeted. "Besides, America already has that! I only hope that Starbucks is still paying me their rent in Trump Tower!"

Note that Trump alluded to himself as the "smartest person" and admitted he is still profiting off his businesses while serving as president, which he promised not to do.