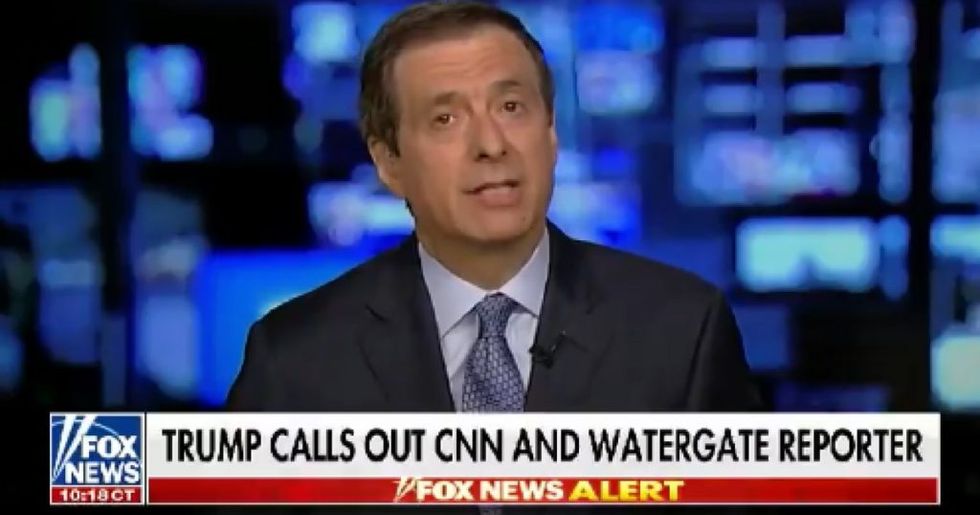 On Thursday morning, Trump tweeted that "Little Jeff" Zucker, the president of CNN, should be fired for the networks "hatred and extreme bias of me."

The hatred and extreme bias of me by @CNN has clouded their thinking and made them unable to function. But actually… https://t.co/IWek2b5bwr
— Donald J. Trump (@Donald J. Trump) 1535626220.0

Kurtz said Trump "has every right" to criticize the media for its coverage of him, but when the president demands that the leaders of CNN and NBC get fired, he takes the "bully pulpit" a step too far.

"The president of the United States should not be calling for the firing of two heads of private companies simply because he disagrees with and doesn’t like their media coverage of him," Kurtz said. "It’s using the bully pulpit in a way that feels like a personal grudge, especially in the case of Jeff Zucker, who had been on leave after surgery for serious heart problems."

Kurtz then called out the hypocrisy of Trump's supporters, who would never have been okay with President Barack Obama insisting Fox News fire Roger Ailes.

If President Obama had said, ‘Hey, Fox News, you should get rid of Roger Ailes, because I think their coverage of me is unfair, it would have been an explosion on the right.'

Trump's complaints about Zucker were part of a flurry of paranoid tweets the president posted in the pre-dawn hours on Thursday morning.

Twelve minutes after whining about CNN, Trump berated NBC and its chairman Andy Lack for "being the worst" regarding coverage he doesn't like. Trump suggested Lack should lose his job for "incompetence and much worse."

For the record - Lester Hold did not "fudge" Trump confessing that he fired FBI Director James Comey over "this Russia thing."

Kurtz said there was "absolute not" any evidence Trump's interview with Holt was doctored.

"There's no credible allegation that NBC or Andy Lack or Lester Holt edited that interview in a misleading way," Lack said.

Less than ten minutes after posting about Lack and Holt, Trump tweeted again, this time saying the "truth doesn't matter" to the media and that those previously mentioned news outlets "only have their hatred & agenda." Trump reiterated his stance that the media is the "enemy of the people."

Kurtz re-enforced his critique of Trump on Twitter following his interview.

I have to be consistent. If Obama had called for firing of Fox News president I would've been equally critical. https://t.co/myaYV04yRt
— HowardKurtz (@HowardKurtz) 1535650269.0

It's no secret that Trump "will try and silence anyone who criticizes him."

One person referred to Trump as a "thug."

Others are simply exhausted by Trump's constant dishonesty.