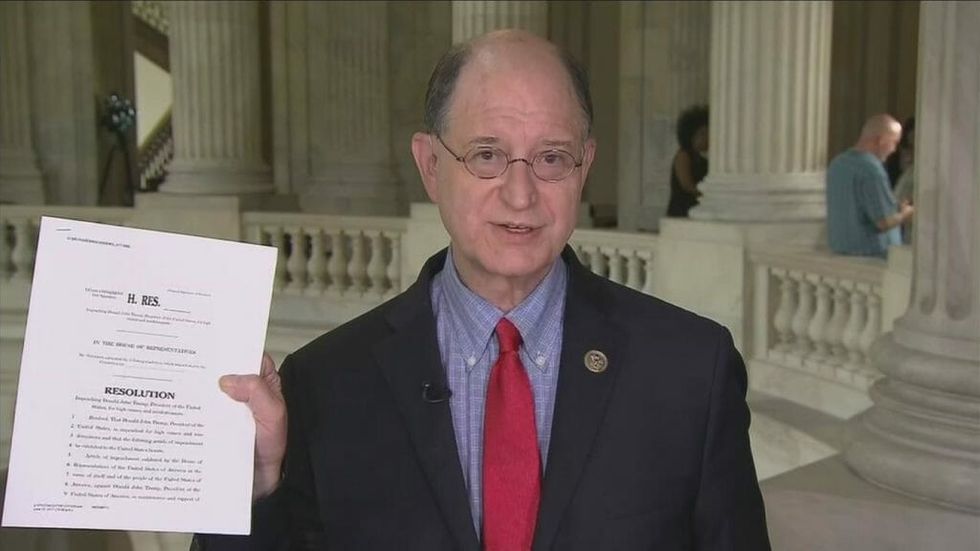 The first attempt to impeach President Donald Trump is underway, after Representative Brad Sherman (D-CA) introduced HR 438, a resolution which claims Trump "sought to use his authority to hinder and cause the termination" of the investigation into Russian election interference and the possibility of collusion within the Trump campaign, in part by firing former FBI Director James Comey. Sherman has one co-sponsor, Representative Al Green (D-TX).

In a statement, Sherman acknowledged that the move is "the first step on a very long road," but was steadfast in his belief that if Trump's "impulsive incompetency [sic] continues, then eventually — many, many months from now — Republicans will join the impeachment effort... If impeachment is real, if they actually see articles, perhaps we will see incompetency replaced by care. Perhaps uncontrollable impulses will be controlled. And perhaps the danger our nation faces will be ameliorated."

Every day Democrats, Republicans, and the entire world are shocked by the latest example of America’s amateur President.  Ignorance accompanied by a refusal to learn.  Lack of impulse control, accompanied by a refusal to have his staff control his impulses.  We’re no longer surprised by any action, no matter how far below the dignity of the office—and no matter how dangerous to the country.

Democrats have tried to distance themselves from talk of impeachment, believing that it can only energize the president's supporters. A spokeswoman for House Minority Leader Nancy Pelosi (D-CA) reiterated Pelosi's call for "an outside, independent commission to get to the bottom of Trump’s connection to Russia’s interference" in last year's presidential election. Last month, Representative Michael Capuano (D-MA) stood up during a Democratic caucus meeting to say Sherman's efforts could have ruinous effects on the Democratic Party.

Sherman filed the article a day after the president's son, Donald Trump Jr., revealed that he met with a Russian lawyer during the presidential campaign. An intermediary for the lawyer promised damaging information about Hillary Clinton, the Democratic opponent. Trump Jr.'s emails contradict months of denials by the Trump administration of any collusion with Russian operatives. When asked about Sherman's impeachment effort, Sarah Huckabee Sanders, the Deputy Press Secretary, was firm: "I think that is utterly and completely ridiculous and a political game at its worst," she said.

Video obtained exclusively by CNN shows the future President Donald Trump with Russians tied to the email controversy. The video shows Trump attending a dinner with Emin Agalarov and his father, Aras, the billionaire head of an Azerbaijani-Russian family with ties to Russian leader Vladimir Putin. The Agalarov family became Trump's business partners in Las Vegas in June 2013. Also at the dinner: their publicist, Rob Goldstone, who would later send Donald Trump Jr. the damaging emails which have placed him at the forefront of the controversy over Russian collusion, Michael Cohen, Trump's personal attorney, and Keith Schiller, the current director of Oval Office operations.