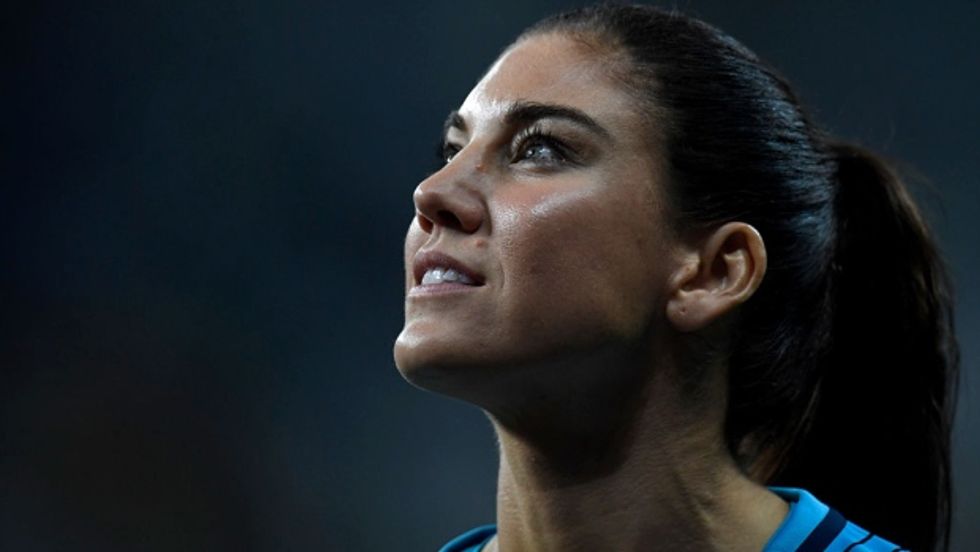 The United States Soccer Federation has suspended U.S. women’s national team goalkeeper Hope Solo for six months and terminated her contract for comments she made about Sweden’s national team during Rio’s Olympics. Solo made headlines earlier this month after she called the Swedes “a bunch of cowards” for focusing on defense in a match against the three-time defending champion U.S. team after the Swedes beat the U.S. 4-3 on penalties following a 1-1 draw in the quarter-finals of the 2016 Olympic tournament.

U.S. Soccer said Solo’s behavior was “counter to the organization’s principles” and that her suspension will take effect immediately. U.S. Soccer President Sunil Gulati called Solo’s comments “unacceptable,” a violation of the Olympics’ core values of “fair play and respect.”

Solo, who will not be eligible for selection to the national team until February, said she was “saddened” by the decision. "I could not be the player I am without being the person I am, even when I haven’t made the best choices or said the right things," she wrote in a statement posted to her Facebook page. "My entire career, I have only wanted the best for this team, for the players and the women’s game and I will continue to pursue these causes with the same unrelenting passion with which I play the game."

However, U.S. women's national team player representative Rich Nichols questioned whether U.S. Soccer would have taken similar action against “a male player or coach, who, in the heated moments after a frustrating defeat, questioned the tactics of the opposing team.” Nichols indicated USWNT would “file an appeal on Solo’s behalf,” and referred to the move as “excessive, unprecedented,

disproportionate and a violation of Ms. Solo’s First Amendment rights.”

This is not the first time Solo has courted controversy, nor is this her first suspension from the women’s national team. U.S. Soccer issued a 30-day suspension last year after she and her husband, Jerramy Stevens, were stopped in a van Stevens was driving by Los Angeles police. Authorities charged Stevens with DUI. He pleaded no contest to the charge and received a 30-day jail sentence. At the 2007 World Cup, U.S. coach Greg Ryan benched her for the semifinal against Brazil (previously, Solo had started every game). Solo condemned Ryan’s decision publicly after the U.S. lost 4-0, and her teammates shunned her in response. After the disappointing match, U.S. Soccer fired Ryan even though it was the only the team’s second defeat during his two and a half years of leadership. U.S. Soccer welcomed Solo back to the team under coach Pia Sundhage, and Solo won a gold medal in Beijing the following year.

Coincidentally, Sundhage now coaches Sweden’s national team: the same team Solo so openly disparaged. When asked for a response to Solo’s remarks, Sundage said: “It’s okay to be a coward if you win.”