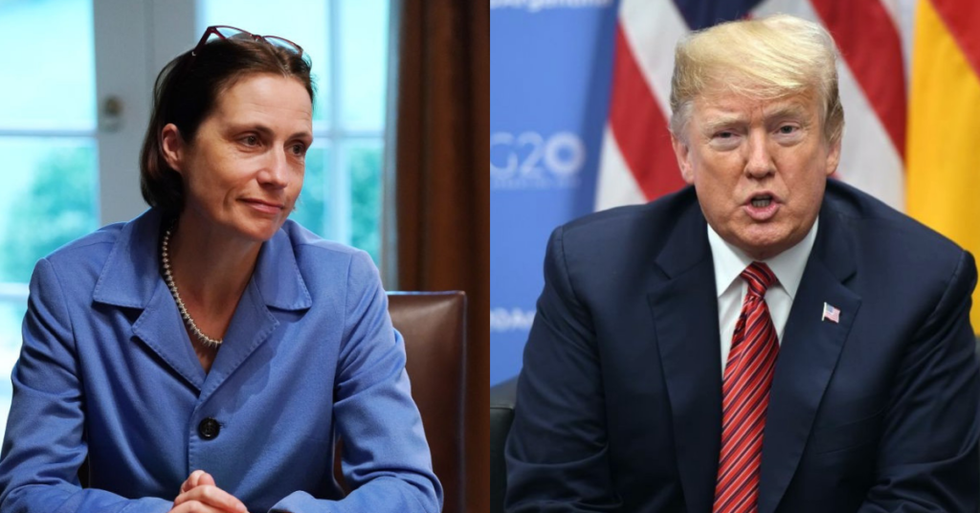 So far, two women have largely defied White House orders to ignore the constitutional impeachment process and testified. Former Ukrainian Ambassador Marie Yovanovitch—a career member of the senior foreign service who served as an ambassador under President George W. Bush and President Barack Obama—shocked some, but earned accolades from many for showing up for her testimony.

On Monday, former White House aide specializing in Russia and European affairs, Fiona Hill, appeared for a deposition before a House committee as part of the impeachment inquiry.

But according to documents shared by congressional correspondent for The New York Times Nicholas Fandos, the Trump administration tried to block her from appearing.

"It appears the WH and lawyers for Fiona Hill had a full back-and-forth about potential privilege issues with her testimony in the run-up to today."

It appears the WH and lawyers for Fiona Hill had a full back-and-forth about potential privilege issues with her te… https://t.co/ay3hAyMos9
— Nicholas Fandos (@Nicholas Fandos) 1571101080.0

"And here is the response from Hill's lawyer, Lee Wolosky: 'We also understand that executive privilege likely does not apply to information which is no longer confidential and has come within the sphere of public knowledge through broad disclosures'."

The letter lays out all of the Trump administration's claims that Executive Privilege is a viable reason for silencing Hill's testimony...then promptly shuts them down.

@npfandos Every witness called to testify should just have their lawyers copy and submit this letter to the White H… https://t.co/DkCESGKiQZ
— Only The Truth (@Only The Truth) 1571120058.0

With release of the documents, people began to dissect the claims and justification for blocking testimony offered by Trump's lawyers.

@npfandos @Susan_Hennessey It's notable here that the first footnote, tied to an argument put forward by George Was… https://t.co/MKr7k4KJ1T
— Josh Marshall (@Josh Marshall) 1571101320.0

Some suggested a way the President could save on legal fees.

Although, is he paying his legal fees on the impeachment inquiry or are the taxpayers?

Others wondered why such a reaction when there is nothing to the impeachment inquiry...

...but noted it fit a pattern with Trump.

But a few eagle eyes noticed the use of the word malversation in a quote from President James Polk.

Congress has been recessed on a scheduled state and local work period since September 23 while committees continued work on the impeachment inquiry. The full House and Senate return to work on Tuesday, October 15.

The book Trump on the Couch: Inside the Mind of the President by Justin A. Frank, MD, is available here.