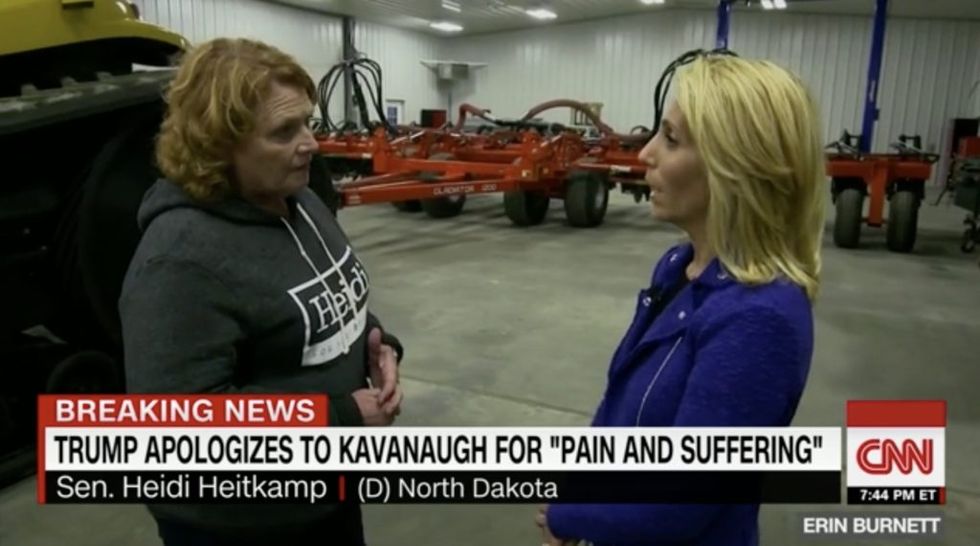 Senator Heidi Heitkamp, a North Dakota Democrat, voted against newly appointed Supreme Court Justice Brett Kavanaugh's confirmation, and she knows that choice has made her the most vulnerable Democrat in the Senate.

"It's been a tough week for me," said the legislator as she spoke to a crowd of her constituents in the reliably red state, pointing out that she wasn't raised "to vote a certain way so that I could win. They raised me to vote the right way." (That statement got her a standing ovation.)

Speaking to the press afterward, Heitkamp recalled that she, who voted to confirm Justice Neil Gorsuch, was planning to vote to confirm for Kavanaugh––in fact, her office had prepared a statement––until the highly contentious Senate Judiciary Committee hearing during which Dr. Christine Blasey Ford recalled an alleged assault Kavanaugh committed against her at a high school party. Heitkamp said it was her decision to watch the hearing for a second time with the sound off that convinced her not to confirm Kavanaugh to the nation's highest court.

"We communicate not only with words but we communicate with body language... I saw someone who was very angry, very nervous. I saw a rage that a lot of people said, 'well, of course, you're going to see rage he's being falsely accused,' but it is at all times you're to acquit yourself with a demeanor that's becoming of the court," she said.

Heitkamp said that her own experience as an attorney also contributed to her decision not to confirm Kavanaugh:

"I certainly think I have expertise beyond a number of people within the United States Senate and that expertise is that I have sat across the desk with victims people I've believed when they told me their story, and I had to say,'I believe you but these cases can't be proved beyond a reasonable doubt so we can't proceed with the prosecution.' And when you've done that, you know for a victim, the most important thing you can say is 'I believe you' if you do, and I think it really came down to that I believed her."

Addressing criticism that siding with Dr. Ford is a type of "victimization," Heitkamp said:

"You should be so grateful that you've never been victimized and that your wife's never been victimized, and your daughters haven't, but people in my life have, including my mother, and to suggest that she's not strong because she's a victim was like a trigger for me...

And I want you to put this in there, it did not make my mom less strong that she was a victim. She got stronger and she made us strong. And to suggest that this movement doesn’t make women strong and stronger is really unfortunate.”

Heitkamp has been praised for her stance, but she has been trying to hold onto her seat in a state Trump won by 36 percentage points. Her move has resonated with women around the country who have pledged more donations and support for her campaign with less than a month until midterm elections.

Hey everybody @HeidiHeitkamp needs not only money but campaign volunteers. If you've got some time to spare, go hel… https://t.co/Eena7m9zV2
— Joan Walsh (@Joan Walsh) 1539019111.0

In contrast, Heitkamp's opponent in the midterms, Kevin Cramer, has said that the #MeToo movement is a "movement toward victimization."

North Dakotans, he said, appreciate the value “of saying what a lot of other people don’t dare say — but think.”

When asked for an example, he, alluding to Dr. Ford and her testimony, replied: “That you’re just supposed to believe somebody because they said it happened."

Earlier, President Donald Trump apologized to Brett Kavanaugh for "the terrible pain and suffering" he and his family were "forced to endure" during his confirmation process.

"Those who step forward to serve our country deserve a fair and dignified evaluation, not a campaign of political and personal destruction based on lies and deception," Trump said. "What happened to the Kavanaugh family violates every notion of fairness, decency and due process."

Trump said a man or woman in this country "must always be presumed innocent unless and until proven guilty."

"You, sir, under historic scrutiny, were proven innocent," Trump said to Kavanaugh.

Kavanaugh was confirmed over the weekend amid controversy over the time-limited investigation into the sexual misconduct allegations against him. There has been an enormous amount of pushback the FBI’s report has received from politicians and the general public alike in light of the limits placed upon the investigation and the knowledge that the bureau declined to interview the witnesses suggested by the attorneys for Kavanaugh’s accusers.

The Washington Post reported that the FBI’s investigation had been “highly curtailed” and that it had focused primarily on the allegations brought to light by Dr. Ford. The FBI did not interview Dr. Ford, deeming her Senate testimony sufficient.

The FBI did interview Deborah Ramirez, who says Kavanaugh exposed himself to her at a Yale fraternity party, but Ramirez’s legal team has no indication that the FBI interviewed any of the corroborating witnesses they provided. Nor did the bureau interview Julie Swetnick, who says Kavanaugh was present at a house party in 1982 where she alleges she was the victim of a gang rape.