Get out the popcorn. 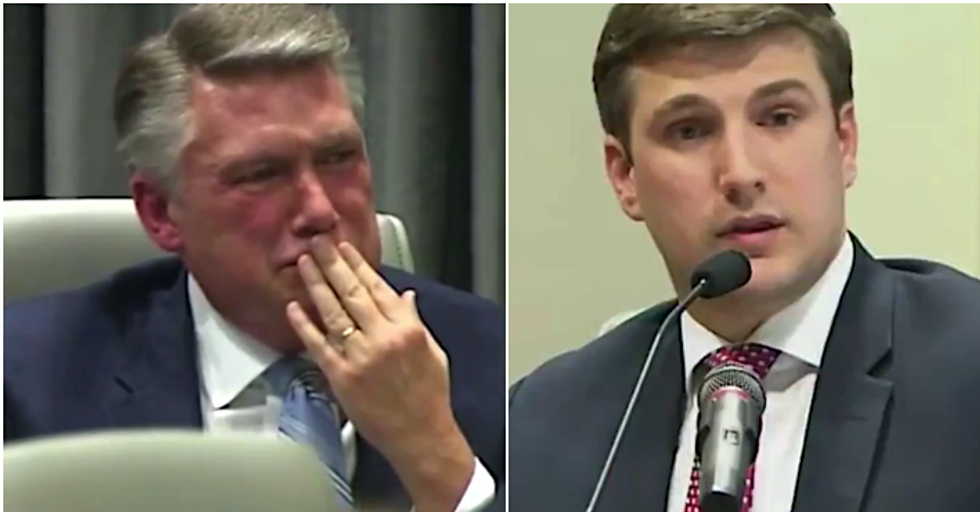 NC Board of Elections video

*This article has been updated to include the NC Board of Elections ruling.

In November's 2018 midterm elections, GOP candidate Mark Harris narrowly defeated his Democratic challenger Dan McCready in a race to represent congressional district NC-09. But almost immediately afterward, allegations of ballot fraud by a member of Harris' campaign surfaced eventually leading to McCready rescinding his concession and North Carolina not certifying the election results for the district.

The North Carolina Board of Elections began an investigation and hearings into the involvement of Harris campaign worker Leslie McCrae Dowless in ballot fraud. On Wednesday, the assistant US Attorney for the Eastern District of North Carolina testified about multiple warnings he gave to Harris about hiring and working with Dowless and his employer, Red Dome Group.

That federal prosecutor is John Harris, Mark Harris' son. The younger Harris stated on the stand he loved his father and mother, but must tell the truth about the multiple warnings he gave to his father and his campaign about working with Dowless.

It was a very emotional moment for his father, who looked on from the gallery and broke down in tears.

John Harris says he told his dad in April 2017 that he believed Dowless was collecting ballots, which was a felony… https://t.co/VS7mMjb3mw
— Melissa Boughton (@Melissa Boughton) 1550692029.0

By the end of the day, Mark Harris called for a new election, saying:

"It's become clear to me that the public's confidence in the 9th district seat general election has been undermined to an extent that a new election is warranted."

Mark Harris saw his own son take the stand and testify that he had warned him repeatedly not to hire the man who la… https://t.co/EWOkqHy3iS
— Jamil Smith (@Jamil Smith) 1550783963.0

The North Carolina Board of Elections however had the final say. They agreed however and subsequently ordered a new election for the NC-09 with a unanimous vote.

The testimony of Harris's son drew a great deal of attention due to his choice of ethics and morality over familial loyalty.

1. What happened yesterday in North Carolina was one of the most extraordinary things I’ve ever seen in politics.… https://t.co/tTQKX3c7Um
— Judd Legum (@Judd Legum) 1550757458.0

2. John Harris laid out in meticulous detail how he had warned his father for YEARS that McCrae Dowless was breakin… https://t.co/jkDH2QNn8P
— Judd Legum (@Judd Legum) 1550757567.0

People felt the younger Harris showed a great deal of integrity for the oath he swore as a federal prosecutor to uphold the Constitution and laws of the United States. Many could not help but reflect on others who took the same oath but did not make the same choice.

Many had further words of praise for Harris.

They recognized the difficult position he had been placed in by his father's desire to win the election at any cost.

@JuddLegum What immense integrity John has. Kudos to him - that must have been difficult, both to do and to realize the need to do.
— Tristan Gregory (@Tristan Gregory) 1550758379.0

In his testimony, the younger Harris stated he warned his parents as early as 2016 to not trust Dowless because he "may have been engaged with a group using unsavory and illegal electoral practices." Harris the elder—a former Southern Baptist minister who drew ire over his comments regarding both Jews and Muslims—defeated the Republican incumbent in the primaries in order to move on to face Democrat Dan McCready in the 2018 midterms.

His son warned of Dowless' team collecting absentee ballots, which is illegal according to North Carolina law. He went so far as to send his father the statute addressing the issue.

In an email to his father prior to the 2018 midterms, John Harris wrote:

"The key thing that I am fairly certain they do that is illegal is that they collect the completed absentee ballots and mail them all at once. The way they pop up in batches at the board of elections makes me believe that."

The GOP campaign failed to submit the texts and emails from John to his parents, claiming they misunderstood the subpoena. Federal prosecutor Harris provided them instead.

@JuddLegum To me that shows a consciousness of guilt and that Mark Harris wasn’t simply naive. I feel for John Harr… https://t.co/7OqYAHT7Vv
— WindUpBird (@WindUpBird) 1550757957.0

Mark Harris and his campaign maintained since the beginning of the investigation that they knew nothing of Dowless' possible illegal activities.

On the stand today John Harris testified he told his dad about concerns regarding Dowless. Here's part of my interv… https://t.co/nwmxmFxHY1
— Tim Boyum (@Tim Boyum) 1550694236.0

HARRIS vs HARRIS: Check out this clip I made comparing John Harris's testimony with statements made by his father i… https://t.co/4PEXdYwL7k
— Corey Schmidt (@Corey Schmidt) 1550757075.0

The hearing concluded on Thursday.

All five members voted to order a new election.