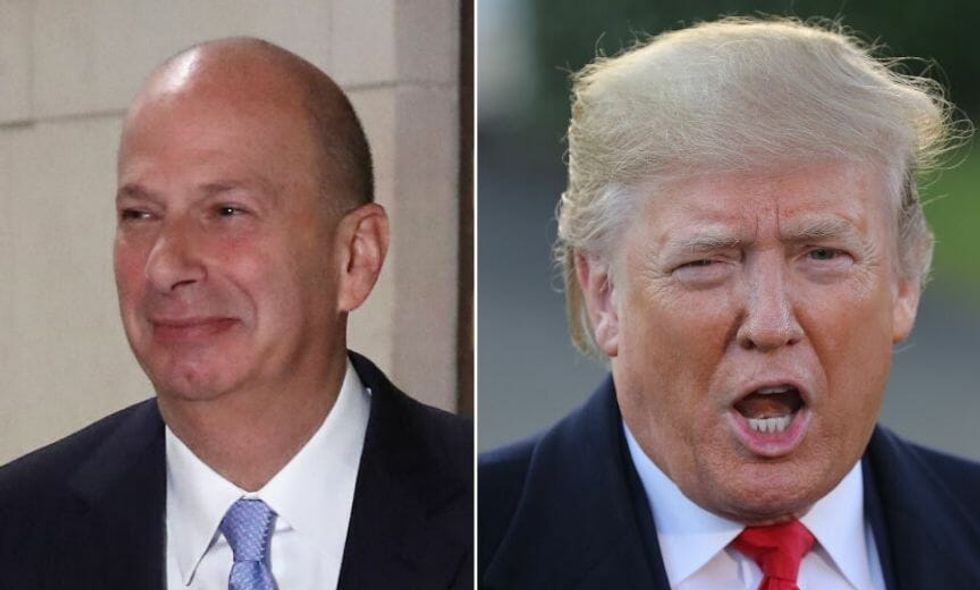 Their defense against the impeachment inquiry of Trump? There was no quid pro quo offered to Zelensky in exchange for investigating Biden.

Though no quid pro quo was necessary, since Trump was soliciting a foreign leader for dirt in a domestic election, Democrats were suspicious that the White House withheld hundreds of millions of dollars in congressionally approved aid to Ukraine without explanation days before the call with Zelensky.

In a testimony early last month, Ambassador to the European Union Gordon Sondland testified to the committees overseeing the impeachment inquiry that none of the aid slated for Ukraine was related to Ukrainian officials opening an investigation. Soon after, acting Ambassador to Ukraine, William Taylor, testified that the White House was demanding a public announcement of the investigation in order for Ukraine to get the crucial aid.

Now, Sondland has revised his testimony to admit that he did, in fact, tell Ukrainian officials that the aid package was contingent on Zelensky publicly announcing an investigation into Joe Biden.

“I said that resumption of the U.S. aid would likely not occur until Ukraine provided the public anticorruption statement that we had been discussing for many weeks."

Sondland still maintains that he doesn't know who suspended the aid to Ukraine and that he was merely presuming the demands for investigation were required for lifting the hold, but combined with the other damning depositions given to the committees, the writing is on the wall.

Sondland describes a bribe. Delivery of something of value to Trump (cooked up oppo research for his campaign) in e… https://t.co/z8BtyAJqW3
— Jennifer Rubin (@Jennifer Rubin) 1572983428.0

Quid Pro Quo. Something for Something. This is what Amb Sondland and other witnesses have established. In this cas… https://t.co/uAndwlq4mp
— Ted Lieu (@Ted Lieu) 1572980373.0

This is it. Sondland confirms everything about abuse of power. We still need to know more about coverup. The Repub… https://t.co/gNbUZ86Z6u
— Joe Lockhart (@Joe Lockhart) 1572980287.0

There's little room for doubt that the Trump administration was withholding aid for Ukraine. Now the question many are asking is how Trump's Republican allies, who dismissed the controversy regarding the call on the basis that there was no quid pro quo, will now defend the President's actions.

How will Republicans deny the quid pro quo after the Sondland revision?
— Chris Cillizza (@Chris Cillizza) 1572984122.0

With Sondland's testimony, it's now crystal clear that Trump committed the most egregious abuse of power in modern… https://t.co/IAtmeKEbSo
— Brian Klaas (@Brian Klaas) 1572980083.0

Clues are beginning to emerge as to what the Republican talking points will be.

White House Press Secretary Stephanie Grisham, continuing the tradition of her predecessors, released a statement telling the country to deny their eyes and ears:

"Both transcripts released today show there is even less evidence for this illegitimate impeachment sham than previously thought. Ambassador Sondland squarely states that he 'did not know, [and still does not know] when, why, or by whom the aid was suspended.' He also said he 'presumed' there was a link to the aid—but cannot identify any solid source for that assumption. By contrast, Volker's testimony confirms there could not have been a quid pro quo because the Ukrainians did not know about the military aid hold at the time. No amount of salacious media-biased headlines, which are clearly designed to influence the narrative, change the fact that the President has done nothing wrong."

But it doesn't look like that's going to fly.

I didn’t think it was possible to find a press secretary more deceitful or horrifying than Sarah Huckabee Sanders b… https://t.co/sXUVh36m3I
— Tony Schwartz (@Tony Schwartz) 1572916244.0

Numerous officials other than Sondland have said there was a quid pro quo, including White House Chief of Staff Mick Mulvaney.