The GOP Hailed the Arrival of a "New King.” The Internet Wasn’t Impressed. 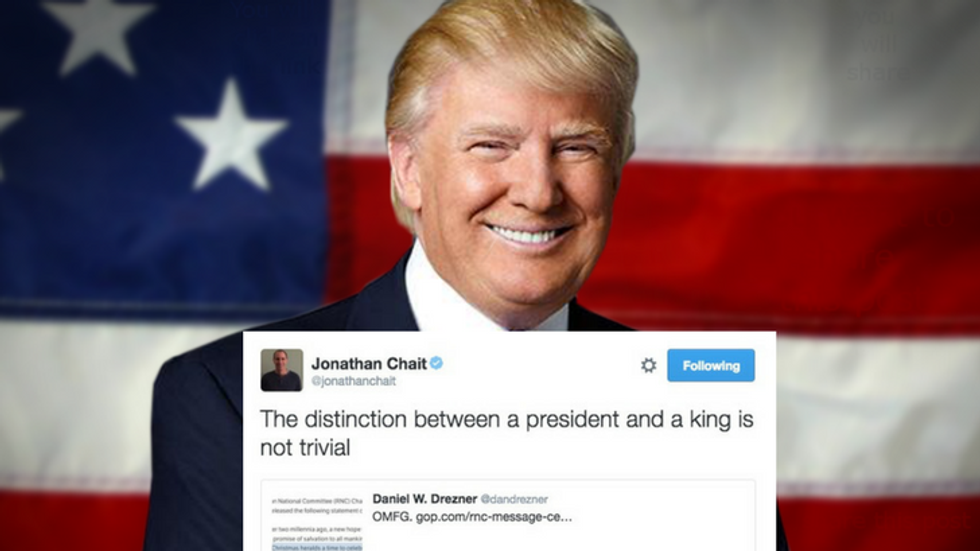 The contentious excerpt from the message from RNC Chairman Reince Priebus, who the president-elect named his White House Chief of Staff, and co-chair Sharon Day, reads as follows:

Merry Christmas to all! Over two millennia ago, a new hope was born into the world, a Savior who would offer the promise of salvation to all mankind. Just as the three wise men did on that night, this Christmas heralds a time to celebrate the good news of a new King. We hope Americans celebrating Christmas today will enjoy a day of festivities and a renewed closeness with family and friends.

The statement sparked a discussion on social media: Some argued that the "King" reference appeared to be about Trump, while others insisted the line was little more than a reference to Jesus Christ.

In a Twitter message of his own, RNC spokesman and incoming White House press secretary Sean Spicer insisted the reference had nothing to do with the president-elect.

The RNC's Christmas message also asked Americans to "remember those among us who are less fortunate," including "our men and women in uniform." Last year's Christmas message expressed similar sentiments––however, it made no reference to a "King" of any kind.

For the RNC's critics, the statement is a sign that the Republican party has shifted even further to the right, and that it is bent on reinserting Christian teachings and traditions into public life. Much of the language within the official GOP platform emphasizes the party’s staunchly conservative attitude toward gay rights and its insistence that the Bible and God be present in the classroom while incorporating some of Donald Trump’s most extreme campaign pledges, including the building of a wall along the border with Mexico.

The platform’s treatment of LGBTs, for example, goes far beyond what the platform stated four years ago. Several new provisions opposing same-sex marriage and endorsing “gay conversion therapy” passed preliminary votes. Staunch social conservatives repeatedly rejected efforts by more moderate members of the committee to add language condemning or acknowledging anti-gay discrimination, even any that acknowledged the massacre of gay people in the Pulse Nightclub in Orlando.

An initial draft circulated in June to committee members reasserts the party’s opposition to same-sex marriage: “Our laws and our government’s regulations should recognize marriage as the union of one man and one woman and actively promote married family life as the basis of a stable and prosperous society,” the draft states. “For that reason, as explained elsewhere In this platform, we do not accept the Supreme Court’s redefinition of marriage and we urge its reversal, whether through judicial reconsideration or a constitutional amendment returning control over marriage to the States.” Moderate members condemned an amendment which argued same-sex marriage “subverts child’s rights to biological parent.”

Tony Perkins, a socially conservative member of the Family Research Council, proposed an amendment supporting “conversion therapy” for children who identify as LGBT. Perkins’ original draft strongly advocated for the practice and passed the subcommittee on health care, education, and crime, but the full committee ultimately forced a modified version. “We support the right of parents to determine the proper treatment or therapy, for their minor children,” the amendment stated. The amendment also calls for legislation that would require minor women who wish to cross state lines for an abortion to obtain parental consent.

An amendment specifically recognizing gay people as targets of the Islamic State also failed to gain traction. Rhode Island delegate Giovanni Cicione argued that the amendment is an “innocuous and important” way to show LGBTs that the GOP does not exclude them, but he was ultimately shut down by Indiana delegate Jim Bopp. “Obviously, there’s an agenda here,” said Bopp, who adamantly declared the GOP has always rejected “identity politics.”

This rejection of “identity politics” extends to the subcommittee’s consideration of “bathroom amendments,” which, like HB2 in North Carolina, prohibits transgender citizens from using the restroom that best matches their chosen gender identity. The platform also condemns President Barack Obama administration’s efforts to rectify the situation. “Their edict to the States concerning restrooms, locker rooms and other facilities is at once illegal, ominous, and ignores privacy issues,” the draft stated. “We salute the several States which have filed suit against it… We support and encourage the common sense practice of protecting public safety and personal privacy by limiting access to restrooms, locker rooms, and similar facilities based on biological gender.”

Annie Dickerson, a committee member from New York,  ardently opposed the bathroom amendments and criticized her colleagues for continuing to write language offensive to LGBTs, asking, “Has a dead horse been beaten enough yet?” Dickerson’s vigorous denunciations continued. “I think this takes us to a dark place,” Dickerson said. “It shrinks our tent. We should be about addition, not subtraction.” National Committeewoman Melody Potter disagreed with Dickerson’s criticisms, arguing that while “nobody wants to discriminate against anybody,” she considered the matter “an issue of safety.”

The platform also contains several references to returning God and the Bible to public schools and discourse. It asserts that lawmakers should use religion as a guide when drafting legislation, and stipulates “that man-made law must be consistent with God-given, natural rights.” A subcommittee voted near unanimously to make the Christian Bible required reading in public schools as part of American History,

stating that an understanding of the Bible’s contents is “indispensable for the development of an educated citizenry.” While that measure ultimately failed before the full group, a further measure that passed now encourages states to teach the Bible as a literature elective in public schools.

A further eyebrow-raising amendment defines pornography as a “public health crisis” and encourages “states to continue to fight this public menace and pledge our commitment to children’s safety and wellbeing.” With respect to abortion, the GOP platform retained its strict policy against it, without exception in the case of rape or incest.

THE WAR ON CHRISTMAS

All of this comes into context with the supposed "War on Christmas" Trump has pledged to fight. Recently, at a rally in Wisconsin, the president-elect announced his plans while standing in front of a line of Christmas trees.

The notion of a plot against conservative Christians by liberal antagonists exists gained further traction after Fox News promoted The War on Christmas: How the Liberal Plot to Ban the Sacred Christian Holiday Is Worse Than You Thought, by radio host John Gibson. For his part, Gibson asserts that his book never dwelled on the political implications of saying "Happy Holidays," and credits Fox News host Bill O'Reilly with fanning the flames.

“It wasn’t really me. I think it was more Bill, to tell you the truth,” he said. “When Bill made it an issue, it went mega.” Over the years, O'Reilly has continued to claim that the left has fueled a war against Christmas for years. In 2012, for example, he told his audience that liberals were “tying the Christmas situation into secular progressive politics” because they wanted “a new America, and traditional Christmas isn’t a part of it.” Last week, he claimed that the "culture war issue ignited and we won," adding that the president-elect "is on the case."

According to Dan Cassino, a professor at Fairleigh Dickinson University, an "attack" on Christmas is a representation of conservative anxieties. “They say the next step after saying ‘Happy Holidays’ is abortion on demand and euthanasia,” he said. “That’s a hell of a slippery slope, but that’s the argument being made.”

The Rev. Barry W. Lynn, the executive director of Americans United for Separation of Church and State, agrees, saying that the controversy is based on “stories that only sometimes even contain a grain of truth and often are completely false.”

The American Civil Liberties Union has often sparred with people who view the organization as responsible for the supposed war, whether directly or indirectly. The ACLU of Indiana faced criticism earlier this month after it filed a lawsuit on behalf of a Knightstown, Indiana, resident who objected to a Latin cross displayed atop the town's official Christmas tree. The cross was later removed.

But the ACLU does not discriminate between leftists and their more conservative counterparts. “Christmas celebrations in this country are alive and well,” says Daniel Mach, director of the ACLU program on Freedom of Religion and Belief who once defended a Pennsylvania inmate who wanted to stage a communal prayer service,  "and as long as the government itself isn’t promoting religious doctrine those celebrations are entirely constitutional.”

Additionally, Trump’s transition team and cabinet picks are heavy on the fundamentalists.

Trump gained favor from the right when he picked the evangelical Indiana Governor Mike Pence as his vice presidential running mate. (As governor, Pence approved legislation allowing businesses to discriminate against consumers based on their sexual orientation and gender identity, and in 2006, as head of the Republican Study Committee, declared "societal collapse was always brought about following an advent of the deterioration of marriage and family.")

Alabama Senator Jeff Sessions, who was recently appointed Attorney General, has sparked fears that he will roll back civil rights, has gone on record with his belief that "sanctity of life begins at conception," voted against the Matthew Shepherd Act, which added acts of bias-motivated violence based on sexual orientation and gender identity to federal hate-crimes law, and voted against the repeal of Don't Ask, Don't Tell. He has earned a "zero" rating from the Human Rights Campaign, the nation's largest advocacy group for LGBTQ citizens.

Christian leaders told the New York Times after the election that they feel the incoming administration will validate their concerns. “I am confident he will do as president what he said he would do as a candidate,” said Ralph Reed, chairman of the Faith and Freedom Coalition, who galvanized Christians to vote for the president-elect.

But according to Eric Metaxas, an evangelical writer and radio host in New York City, grace and forgiveness "are at the core" of Christianity. "We understand. We’re all screwed up. We all sin. To judge people by fussy moral standards is something I think is no longer the issue it used to be,” Metaxas said. “I think a lot of people believe he’s not the person he was in 2005,” the year a leaked Access Hollywood videotape showed Trump appearing to advocate and admit to sexual assault.