The French Army Probably Just Trolled Donald Trump on Twitter for Canceling His Visit to a Cemetery Because of Rain, and It's Hilariously Savage 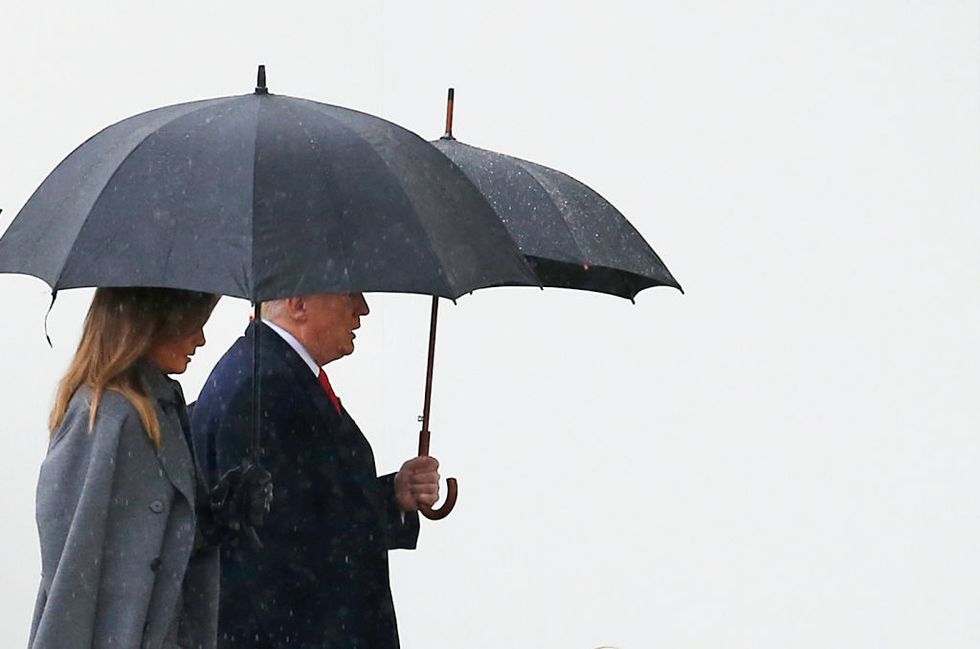 PARIS, FRANCE - NOVEMBER 11: U.S. President Donald Trump and U.S. first lady Melania Trump arrive to attend the international ceremony of the Armistice Centenary of 1918 at the Arc de Triomphe on November 11, 2018. Heads of State from around the world gather in Paris to commemorate the end of the First World War (WWI). (Photo by Chesnot/Getty Images)

“There is rain, but it does not matter,” the French army wrote on Twitter. "We remain motivated.” Accompanying the post: A photo of a rain-soaked recruit crawling through an obstacle course.

Too precious: French army takes jab at #Trump over his decision to skip an #Armistice100 cemetery visit in the cou… https://t.co/eLrpeuKpMR
— George Shiber (@George Shiber) 1542052030.0

The White House canceled Trump's visit after White House Press Secretary Sarah Huckabee Sanders determined that weather conditions provided "near-zero visibility," complicating matters for the president, who would have arrived aboard the presidential helicopter Marine One.

“President Trump did not want to cause that kind of unexpected disruption to the city and its people,” Sanders said.

New statement from @PressSec says Trump did not want to cause the “unexpected disruption” of a last minute motorcad… https://t.co/O0WN93CO6n
— Jennifer Epstein (@Jennifer Epstein) 1541984658.0

Trump was further criticized for not joining other world leaders who arrived by car.

"The cemetery is 50 miles northeast of Paris, and it was not clear why alternative routes — commonly planned for high-profile events — were not used in this case," The Washington Post's Alex Horton noted.

The president's visit to France has been no less contentious despite his absence at the Aisne-Marne American Cemetery. Earlier, French President Emmanuel Macron, in what was seen as a direct rebuke of Trump, denounced nationalism.

"Patriotism is the exact opposite of nationalism. Nationalism is a betrayal of patriotism. By putting our own interests first, with no regard for others, we erase the very thing that a nation holds dearest, and the thing that keeps it alive: its moral values," Macron said.

Trump referred to himself as a “nationalist” last month during a rally in which he denigrated Representative Beto O’Rourke (D-TX), who challenged Republican incumbent Ted Cruz’s Senate seat.

The term “nationalist” has become associated with the alt-right movement, which predominantly supports the president’s agenda and has regularly challenged for espousing white supremacist ideology.

Trump has defended those comments, saying it was meant as a contrast to “globalists” who place international interests before those of the United States.

The president further came under fire after sharing a rather warm greeting with Russian leader Vladimir Putin.

The two men, whom U.S. intelligence agencies believe together conspired to subvert the 2016 presidential election, arrived separately from the other heads of state who took part in the commemorations, although Trump was already in attendance when Putin arrived and was caught beaming at the sight of the Russian president.

Trump and Putin were going to have a one-on-one meeting in Paris, but those plans were scuttled amid Macron’s concerns that the meeting would overshadow the Armistice Day commemorations. Putin later told Russian state media that he did find time to talk to Trump in Paris.