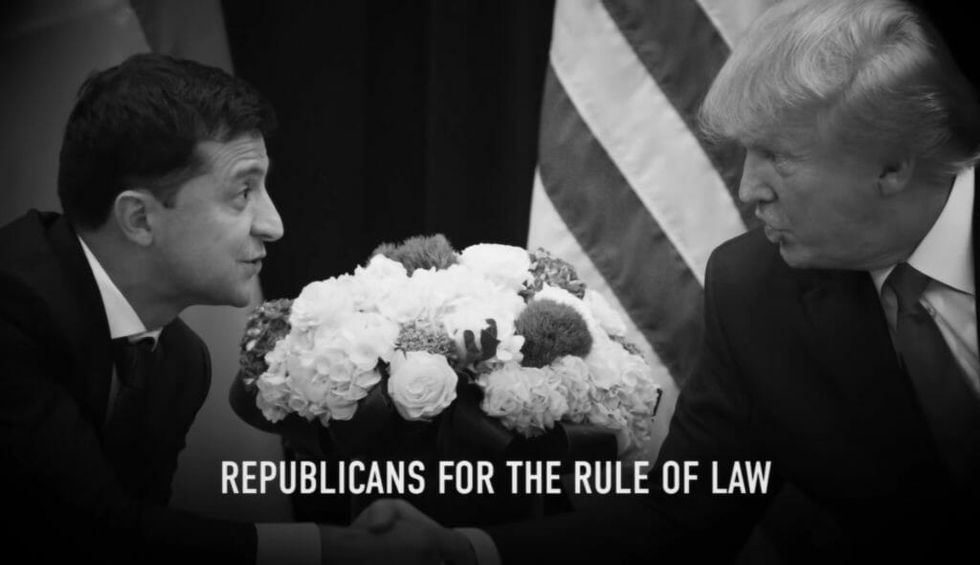 Republicans for the Rule of Law/YouTube

Republicans for the Rule of Law is a conservative activist group. Their stated purpose is "defending the institutions of our republic."

Unlike many of their fellow members of the GOP, they are not fans of President Donald Trump. Also unlike most Republicans, they aren't afraid to voice their opposition to the President and any of his enablers in Congress or elsewhere.

After a recent video pointing out the obstructionism of Senate Majority Leader Mitch McConnell, the group set their sights on Trump's impeachment inquiry and the question of quid pro quo.

In a new 38 second video, the organization asserts quid pro quo occurred and the GOP knows it. The organization bought TV air time for it during one of President Trump's favorite programs—Fox News' morning opinion show Fox & Friends.

For those unfamiliar with the latin phrase quid pro quo, in colloquial terms it's synonymous with tit for tat or the idiom "you scratch my back and I'll scratch yours."

And according to Republicans for the Rule of Law, Trump asked Ukraine President Volodymyr Zelensky to help him with an itch.

As the voice over states in the ad:

"Republicans know a quid pro quo is wrong. Republicans must stand up to Trump's abuse of power."

In his testimony before the House Intelligence Committee, Ambassador Sondland stated:

"I know that members of this committee have frequently framed these complicated issues in the form of a simple question: 'Was there a 'quid pro quo?' With regard to the requested White House call and White House meeting, the answer is yes."

"If you could show me that Trump actually was engaging in a quid pro quo outside the phone call, that would be very disturbing."

And while the ad does not directly address hypocrisy on the part of Republicans like Graham, it does immediately follow his declaration with Sondland saying:

"Was there a quid pro quo? The answer is yes."

Senator Graham is up for reelection in 2020.

In addition to purchasing airtime on Fox News, the organization posted their latest video on their YouTube channel and on Twitter.

In an accompanying statement issued by Republicans for the Rule of Law, executive director Sarah Longwell said:

"Rather than fulfilling his oath to defend the Constitution, [President Trump] tried to use the power of the government to strong-arm a friendly government into interfering on his behalf in the 2020 election."

"If the Republican Party claims to stand for national security, law and order, the rule of law, and accountable government, they can't let this abuse stand."

Throughout the impeachment inquiry, the organization applauded the process. They also made the case for why such hearings are necessary.

Response to their latest ad was largely positive.

@ForTheRuleOfLaw Thank you. Even though blind defense of a person or an action in order to retain a position seems… https://t.co/U8oGWwdmIu
— Kathryn Knox (@Kathryn Knox) 1574346120.0

@ForTheRuleOfLaw Trump can only win by cheating. He did it once and got away with it. He tried it again and got cau… https://t.co/VwCoQKevQB
— Gustavo (@Gustavo) 1574298141.0

@ForTheRuleOfLaw You guys need to get some Senators to support your efforts. If they had your honor and integrity t… https://t.co/QtRYVXIdFi
— MAB (@MAB) 1574298089.0

How the ad will be received on Fox News on Friday during Fox & Friends remains to be seen. But it's almost guaranteed a chilly reception from one longtime fan of the show at 1600 Pennsylvania Avenue.