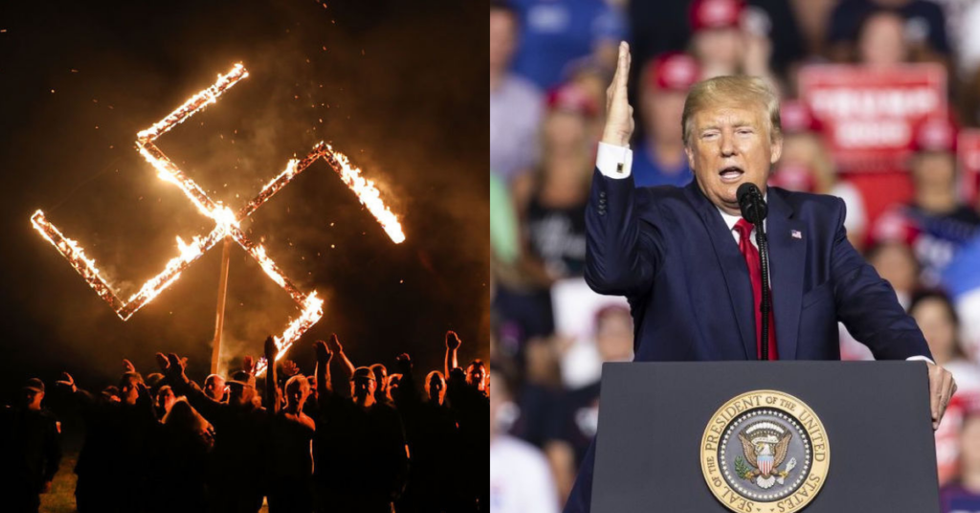 Lin offered no plea during his initial hearing.

According to the criminal complaint filed Friday in Miami, Florida, Lin loves Adolph Hitler. Lin reportedly sent death threats referencing Hitler to a woman he met through her Miami workplace as well as others.

Lin also is a fan of President Donald Trump.

Beginning in May, Lin sent pro-Trump, pro-Hitler threatening Facebook messages to Hispanics living in Miami. One target of Lin's threats contacted Miami police in May who turned the case over to the FBI in July. When the FBI researched the two accounts making the threats, they found both used the same phone number which was registered to Lin's residence.

The woman, originally from Spain, had 150 pages of racist, violent Facebook messages from the accounts. They included images of Lin's face photoshopped onto pictures of Adolph Hitler.

"Composite of my face with the Führer and Reichskanzler Deutschland."

Lin even frequented the restaurant where the woman worked and flashed one of the photos there.

"In 3 short years your entire Race your entire culture will Perish only then after I kill your Sp** family I will permit you to die by hanging on Metal Wire."

But then in mid July, Lin's threats switched from referencing Hitler to referencing President Donald Trump. A July 19 message said:

"I thank god every day Donald John Trump is President and that he will launch a Racial War and Crusade to keep the N*****s, Sp**s, and Muslims and any dangerous non-White or Ethnically or Culturally foreign group 'In Line'."

"By 'in Line' it is meant that they will either be sent to 'Concentration Camps' or dealt with Ruthlessly and Vigorously by the United States Military."

On July 17, 2019 President Trump held a Make America Great Again (MAGA) rally in Greenville, North Carolina that drew widespread condemnation for including White nationalist rhetoric. Then on July 19th, Lin seemed to change his threats from Hitler-focused to Trump-focused. No reason was given for the change.

After the FBI obtained a warrant and searched Lin's online records, they found he communicated on July 10 with a man identified as "Chris" to assault a coworker of the woman. Lin allegedly wrote:

"Sure, pay me first Paypal or Zelle."

Within days, Lin changed his mind from assaulting the coworker to abducting the woman according to the criminal complaint. Another message went to Chris that stated:

"The Plan is you and Mara convince her that you are Rich White Americans people she looks up to. And then get her into a rented house or mansion and chain her up and put her in a Rubber maid Plastic Bin."

"Then you got to drive her to Seattle, Washington, upon which I will pay you $25,000 cash. You don't need to kill her her [sic] hurt her at most you will be charged with Kidnapping.

"Nothing will happen to you if you get the Right lawyers She's a Sp** who Hates White Americans... I doubt the FBI would care much about her."

"I don't care if I have to Pay you a Million Dollars or More I want this Done!"

Luckily Lin was apprehended before he could act on any of his threats to the woman or any of the other Hispanics he threatened online or in person.

Excerpts of the FBI complaint were shared online.

People were angered and horrified.