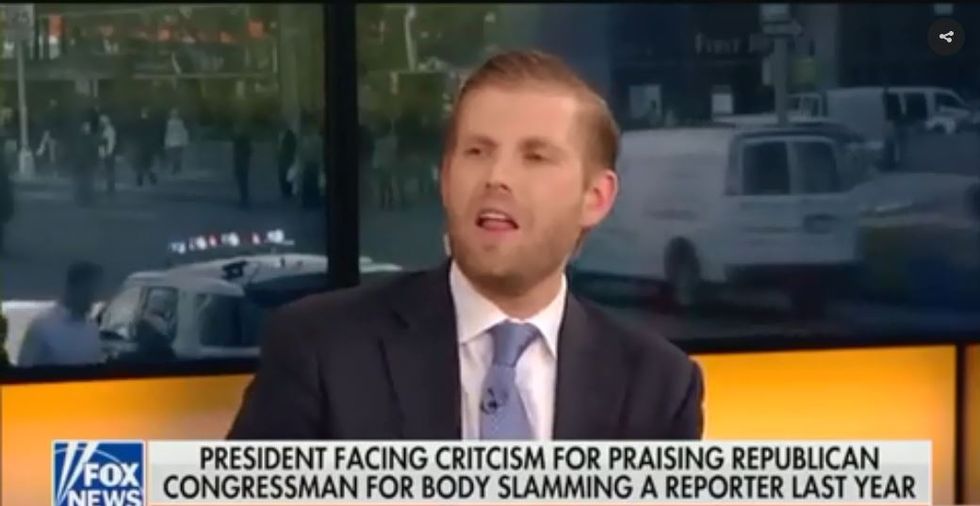 When asked about his father's widely condemned praise of Rep. Greg Gianforte (R-MT) for assaulting a journalist Eric Trump dismissed the backlash against the comments, which came amidst ongoing reports of the brutal murder of Washington Post journalist Jamal Khashoggi.

"Oh stop, he wasn't the guy who bodyslammed anybody. He can have fun...By the way, this is exactly why my father won. Because so many people were so sick of the perfectly scripted politician who memorized their little soundbites and they weren’t any fun and they had no charisma, they had no personality. Hey, to go out as a guy who’s a little bit—who is un-P.C. and probably won because he’s un-P.C.— 'Anybody who body-slams somebody is my kind of guy' and joke about it and the whole crowd is laughing, like stop.”

Many found the comments vile and were sure to let Trump know that he and his father were the only ones who found the president's comments "fun."

@mmfa It's not fun for the journalists whose families are getting death threats
— Reader Adrift (@Reader Adrift) 1539978493.0

@EliStokols Does Eric realizes he and his dad are promoting violence and in particular violence against the free press.
— Maryanne Gibson (@Maryanne Gibson) 1539972210.0

@EliStokols Does Eric realizes he and his dad are promoting violence and in particular violence against the free press.
— Maryanne Gibson (@Maryanne Gibson) 1539972210.0

Trump directly contradicted statements he'd made on Fox and Friends just the day before.

Trump's double standard is showing, having made these comments only one day after appearing on Fox and Friends to criticize the left for its so-called lack of civility:

“You know the lack of civility is always something that bothered me. I mean you look at Eric Holder a couple days ago: ‘When they're down, we kick them in the head.’ Who says this? I mean who does that?”

Trump's critics were quick to point this out as well:

Trump's father, Donald Trump, has a well-documented history of encouraging violence toward those who don't support him, yet many Republicans like Eric divert attention to the left for encouraging protestors to make their voices heard.

We'll soon see whether or not the Trump family is still having "fun" in November.