Rangers at This National Park Can Shoot You Upon Entry 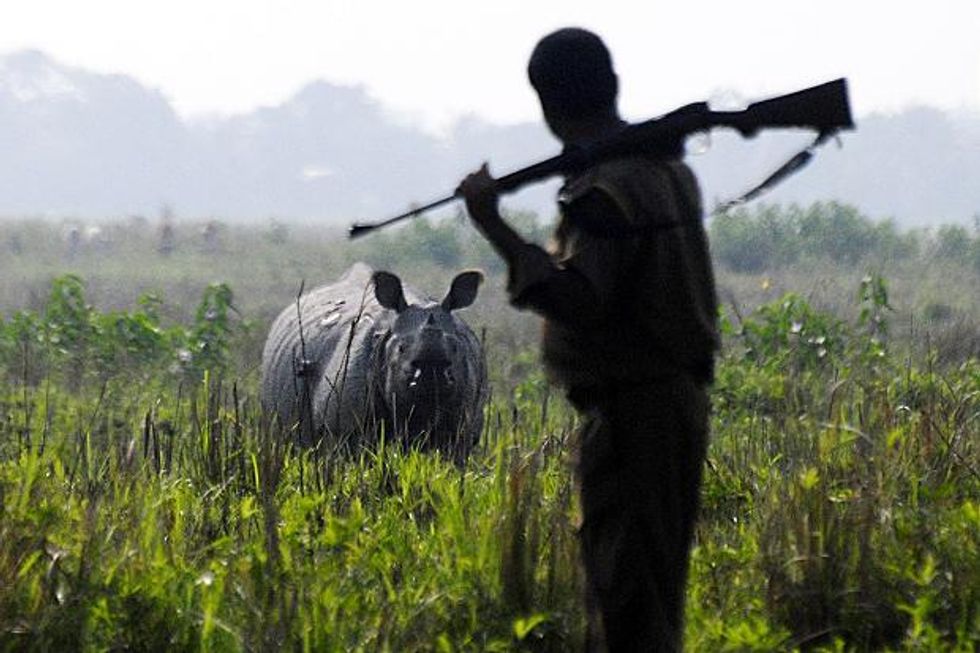 Kaziranga National Park in Assam, India is home to two-thirds of the world’s Indian rhinoceroses. When the park was started about 100 years ago, only a few of the species remained. Now there are more than 2400 at the park, despite a black market value of between $60,000 and $300,000 for just one kilogram (2.2 pounds) of rhino horn.

While the park—and the rhinos living there—are flourishing, it comes at a high price.

Rangers at Kaziranga are licensed to shoot on sight, a power they were given in 2013 after the number of rhinos killed by poachers in the park that year more than doubled to 27. The then-head of the park, MK Yadava, wrote a report proposing that anyone found in the park “must obey or be killed.”

“Kill the unwanted,” he recommended.

Since then, the number of people killed rose dramatically. In 2013, five poachers were killed. In 2014 and 2015, over 20 people were shot and killed each year by park rangers. In comparison, in 2015, 17 rhinos were killed. The number of people killed is likely low. “We don’t keep each and every account,” said a senior official in India’s Forest Department, which oversees India’s national parks.

In a new BBC documentary, the practice is discussed: “The instruction is whenever you see the poachers or hunters, we should start our guns and hunt them,” said one of the rangers, identified as Avdesh. He continued that they are “[f]ully ordered to shoot them. Whenever you see the poachers or any people during night-time we are ordered to shoot them.”

Critics say that not just poachers are being killed, but also native tribal groups that live in the area. Many tribal communities live alongside the park, and collect firewood, herbs and other plants from it. They say that, increasingly, innocent villagers are being shot.

One victim was a seven-year-old named Akash Orang, who was shot in the calf without warning other than the guards shouting, “Rhinoceros!” Months later, the boy can still barely walk. The park admitted wrongdoing, paid for the boy’s medical expenses and gave about $3000 to the family in compensation. However, Akash’s father worries that won’t be enough if his son is unable to make a living due to his disability.

Another victim was Goanburah Kealing, a young man with a severe learning disability. He crossed into the unmarked boundaries of the park, likely while attempting to bring back one of the family’s cows that had strayed. When he did not respond to a warning, the guards shot and killed him.

“He could barely do up his own trousers or his shoes,” said his father, Kachu Kealing. “Everyone knew him in the area because he was so disabled.”

The young man’s death will go unprosecuted. “I haven’t filed a court case. I’m a poor man, I can’t afford to take them on,” said Kealing.

Even if he had money to prosecute, it is unlikely the case would go anywhere. The guards have strong legal protections—some argue too strong. “This kind of impunity is dangerous,” said Pranab Doley, a local tribe member and tribal rights campaigner. “It is creating animosity between the park and people living in the periphery of the park.”

Yet there is no sign that the policy will stop. Indeed, there are rumors that the policy may be extended across the whole of India, as the Indian government puts priority on the preservation of the endangered rhinos.

“Crimes against man, an animal which is found in great abundance and one who is largely responsible for destroying nature and ecosystems, must take a back seat when crime against mother nature is on the examination table,” wrote Yadava in the government report. “These crimes are far more heinous than murder.”