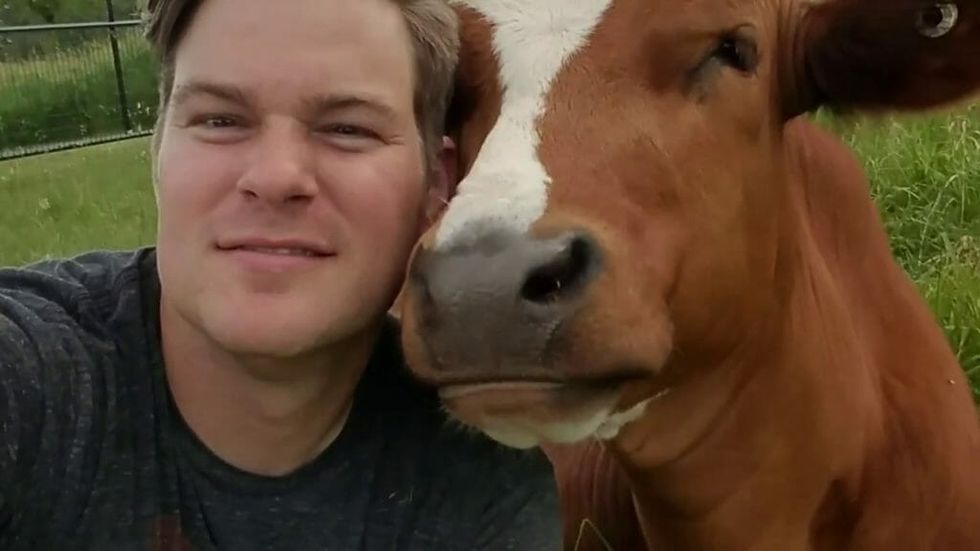 Dan McKernan, Executive Director of Barn Sanctuary, while engaging in cow selfies, has never been the victim of a cow attack. (Screenshot via Youtube)

Cows have a reputation as docile, calm creatures. But the truth is much more grim. In 2015, cows officially became the deadliest large animals in Britain. And yet, the current trend of taking selfies with cows and newborn calves continues—with potentially fatal consequences.

According to a 2009 article from the Centers for Disease Control and Prevention, about 20 people a year are killed by cows in the United States. In most of these instances (16), the cows purposely attacked the humans, usually resulting in fatal injuries to the head and chest. In England, 74 people were killed between 2000 and 2015.

Mother cows are particularly dangerous as they protect their calves. Cow attacks around calving time have increased in the past several years, with attacks from suckler cows now surpassing bull attacks as the number-one cause of livestock-related deaths.

“I’m constantly amazed at how careless people can be—everyone must know that an animal after giving birth is a very different animal to the one you might have thought you knew well,” said chairperson of Limerick Irish Creamery Milk Suppliers Association and farmer Tom Blackburn.

“I would always tell people to be very wary indeed and very careful around suckler cows with calves.”

Dry stock farmer Dominic Leonard nearly lost his life when he was attacked by a mother cow when attempting to tag her newborn calf. “A cow took exception to me trying to tag the calf and basically shoved me against the wall,” said Leonard. He cracked the back of his skull and fell into a coma. “After that I disappeared for basically four months,” he said.

With more than 80 percent of suckler and dairy herds calving between February and April, organizations are hoping to get the word out about the dangers of antagonizing cows, particularly suckler cows.

England’s Health and Safety Executive urges farmers to avoid keeping cows and calves in fields with public footpaths to avoid injury to casual walkers who may inadvertently end up in harm’s way. They caution that walkers should be particularly cautious when with their dogs, as the presence of dogs greatly increases the likelihood of a cow attack.

As for those who purposefully get close to newborn calves for the sake of social media: “I just don’t understand [the selfie trend],” said Blackburn. He was concerned not just for the safety of the people in proximity to the cows, but also the cows themselves. “Why would people do anything like this that is going to obviously bother the cows or distress them? And for the sake of a picture on Instagram or Twitter or Facebook?”

While unsure of the motives, Blackburn cautioned, “I’m very sure about one thing and that is that you must be incredibly careful around a cow and a calf. Very serious injuries—or worse—can be inflicted in a few seconds where people are distracted and stop focusing on the reality of their situation.”